Assuming this is a pressurized chamber with hydro-static force acting on a semi circle stuck in a surface:

Considering the other half of the semicircle, my free body diagram should look like this also:

I would like to know if this is the correct way of calculating the resultant force for such scenario.

Hello I would point out here Pressure is defined over an area so you would need to decide between a cylinder or a sphere (instead of circle) to fully define your problem.

Onwards I would change the perspective of the problem. I make use of the geometric symmetry: The surface AB and BC are identical and have indentical pressures therefore cancelling each other out.

But below A there is hydrostatic force component though the pressure is not constant as one proceeds down. So I find the average pressure acting on the center of the surface found by $P_{av} = (P_A + P_0)/2$ ; where $P_0$ is pressure at rock bottom in tank.

Secondly, the area you are concerned with can be the cross section (AA') normal to the pressure (refer fig). This area needs to be visualised from the side view. It is a rectangle of length L and breadth R-r in case of a cyinder of length L Hence area $L(R-r)$\ It is a semicircle of radius r in case of a sphere hence area $\pi r^2/2$

Edit:
As pointed out in the comments, there is a vertical downward acting component on surface ABC. This can be calculated in a similar way as AA' was analysed except here the same pressure act on projected area AC.

You are partially correct in as far as you recognize that you have to subtract the right side forces from the left side.

But the pressure distribution is not even and is sloped increasing proportionally to the depth.

If you look at the blue trapezoid in my diagram below, all we need to do is to find out the force which is the difference between the area of the large triangle of the pressure ACD and small one ABE and I let you calculate it's the height from the vessel bottom.

Let's call your vessel's depth AC and breadth W. Then we call B and E the level at which your cylinder (not a circle!) cuts onto the wall AC.

Assuming $ \rho=1 \ $ for simplicity. The hydrostatic force is just the blue shaded area and we can find it by subtracting the area of triangle ACD by triangle ABE (sorry for terrible annotation) 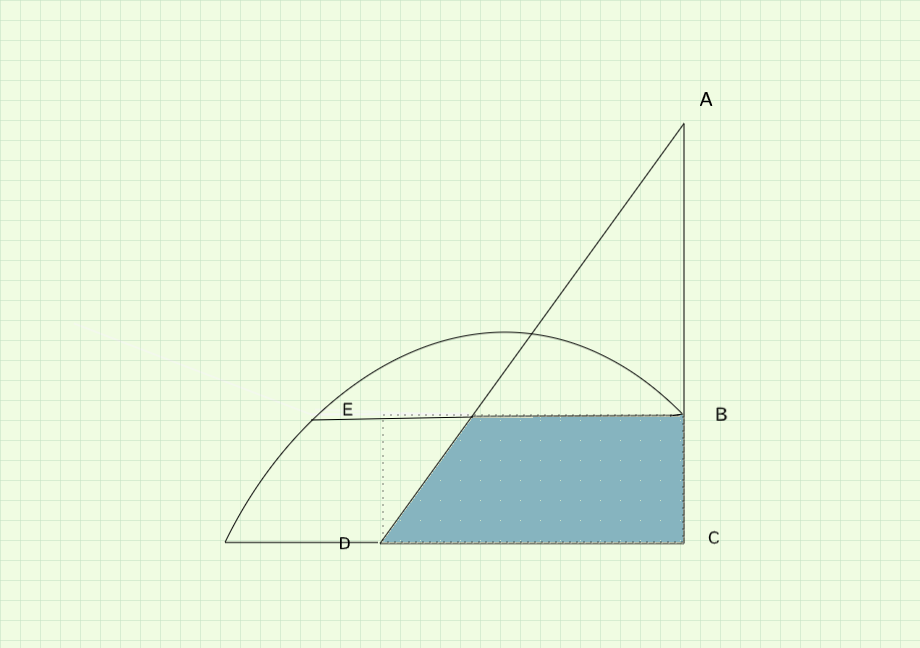 4
Perfectly aerodynamic kitchen range hood
2
How do you find the kinematic degrees of freedom of a mechanism?
2
What practical geographical and engineering constraints limit the depth to which you can build underground?
6
Concrete formwork - best approach to counter uplift forces, for a freestanding pour?
0
Hydrostatic force on inclined immersed surface
0
Difficult Toy Ball Analysis
1
How would you calculate the force needed to rotate along the x axis vertical earth anchor in dirt?
2
Direction of the resultant force in hinge supports
0
How to calculate the force required to lift this deck?