Method of joints not working on simple truss, supposed to be stable and determinant

In the process of editing the question to put better pictures of my dimensions in, I realized that how I calculated my angles was incorrect, and that is why my answers were yielding inconsistent answers

I am writing a computer program to help me solve for stresses in motorcycle suspension and chassis members. I have a girder front fork that I have simplified into a truss, shown below.

What am I doing wrong? Is there something that conceptually, I am not understanding? 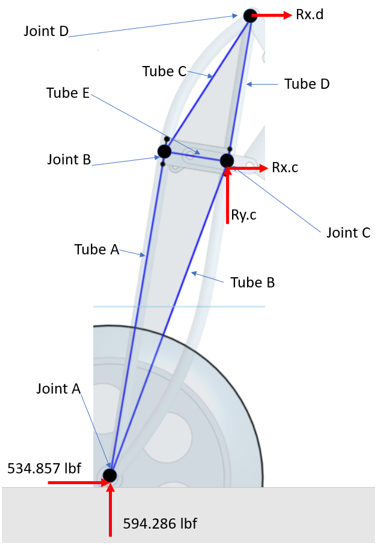 The dimensions are shown below. 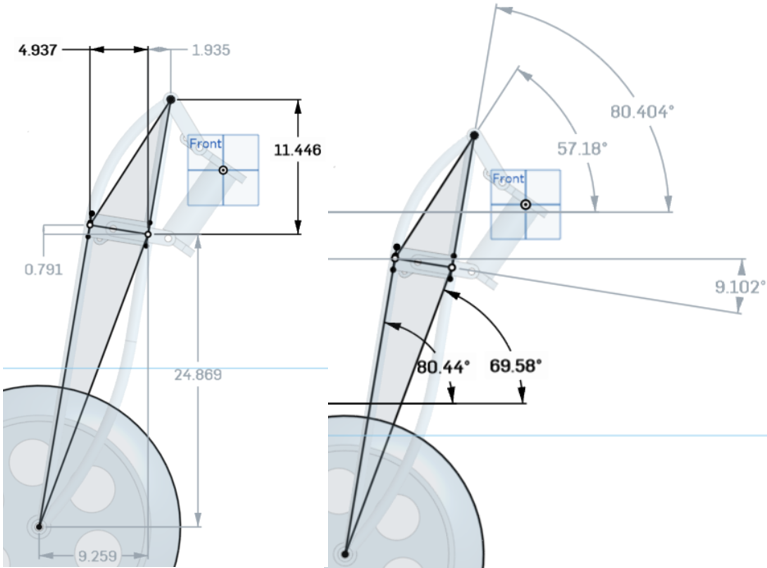 First, I made sure that the structure statically determinant internally from the equation m + r = 2j -> (5 members + 3 reactions) = 2*(4 joints) ; 8 = 8. I also checked to make sure that the structure was stable using a program called itruss. With that in mind, I assumed there shouldn't be any reason why method of joints would not work so I continued my analysis.

Reaction Forces Next, I solved for the reaction forces. I used matrix trick x = A^(-1) * B throughout this analysis. The 3 systems of equations that I got were:

Solving the system of equations gave me: Rx.c = -1216.2 lbf; Ry.c = -594.29 lbf; Rx.d = 681.362 lbf (note that there probably will be some rounding error here compared to if somebody did it by hand with the values I gave because the dimensions in the diagram were rounded)

Method of Joints - Joint AThen I used the method of joints on Joint A to solve the axial force in tube a (F.a) and tube b (F.b). Assuming that all tubes are in tension got me the following system of equations:

Method of Joints - Joint B Next, I used the method of joints to solve for the axial force in tube e and tube c. Assuming that all tubes were in tension got me the following system of equations:

Originally, the calculated values for F.e did not match but now they do after I fixed how I calculated my angles. Sorry about that.

My angles were incorrect in my calculations, but all by less than 0.1 degrees. Once I fixed my angles the answers converged. Who would have thought that an error of 0.1 degrees in each of my angles would lead to inconsistent results.

2
FEM 3D truss analyzer produces forces that do not sum to zero at joints
2
Does an external force at a joint between two members act on one member or on both?
1
How to find the reaction forces, moments and the displacement of the fixed beam with a link?
2
Solving truss using method of joints
2
Percentage error in calculated Forces during simple structural analysis for a truss pin-jointed strucures
1
Finding the displacement in a truss using energy method Question
3
Truss analysis of internal forces in members
0
Question on the determinacy of frame structures