What is the meaning of these two inverted triangle water table symbols in a borehole record?

Consider the borehole record below (in particular the Water Depth column).

There is a white inverted triangle at a depth of 3.20 m. What is the meaning of this symbol?

The white inverted triangle indicates the depth at which water was struck.

There is a black inverted triangle at a depth of 2.50 m. What is the meaning of this symbol?

The black inverted triangle indicates the depth to which the water rose after 20 minutes. 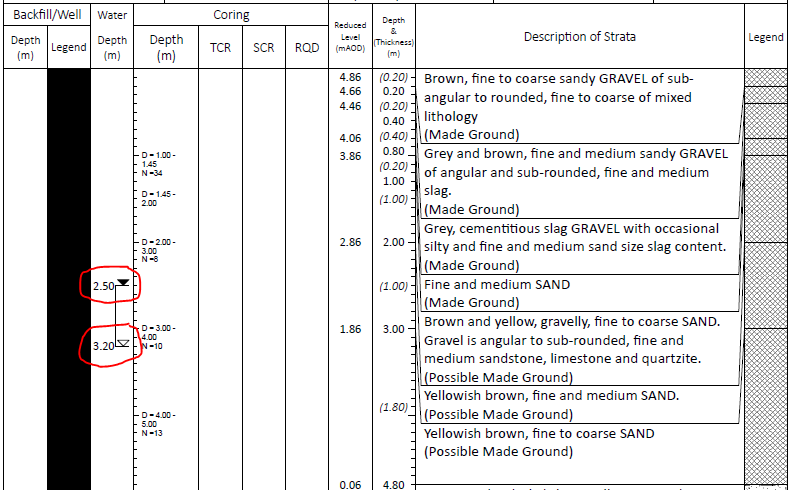 The water table in some locations may vary during the day or over time. For this reason, the borehole drilling process includes waiting periods to see if there are any changes to the water table.

The depth at which the borehole initially finds the water table may be incorrect, an artifact of the drilling process itself. Therefore, if any changes to the water table level are observed, boring must be halted for a short while (10+ minutes) to let the table stabilize (and this must be included in the report).

I've found a nice report (pdf) stored by the UK government which just so happens to explain this on page 7. It also has nice examples of borehole records (i.e. page 8) which indicate differing water levels over time.

The depth at which ground water was struck is entered on the Borehole Records. However, this observation may not indicate the true water level at that period. Due to the speed of boring and the relatively small diameter of the borehole, natural ground water may be present at a depth slightly higher than the water strike. Moreover, ground water levels are subject to variations caused by changes in the local drainage conditions and by seasonal effects. When a moderate inflow of water does take place, boring is suspended for at least 10 minutes to enable a more accurate short term water level to be achieved. An estimate of the rate of inflow is also given. This is a relative term and serves only as a guide to the probable flow of water into an excavation.

Further observations of the water level made during the progress of the borehole are shown including end of shift and overnight readings and the depth at which water was sealed off by the borehole casing, if applicable.

Whilst drilling through granular soils, it is usually necessary to introduce water into the borehole to permit their extraction. When additional water has been used a remark is made on the Borehole Record and the implications are discussed in the text.

What I'm going to say next is based on what I've found in Brazilian codes; I'm not 100% sure if this also applies elsewhere, but I believe it does.

Once the borehole has reached the requested depth, Brazilian codes (NBR 6484:2001 6.5.5-6) require the removal of water from the borehole in an attempt to lower the measured water table as much as possible. After waiting at least 12 hours, a new water table depth measurement is made and registered in the report.

I'm unsure if this was the exact procedure used in your report, but it seems clear that the two marks indicate the water table observed at two different moments. The report really should come with a legend with this information (especially since water table measurements should come with timestamps).

The Report should have some language explaining that.

There may have been rains elevating the aquifer level.

If there are water wells near the site the change in pumping can affect the water level.

Or it could be a simple as a utility water line has broken near the site.

Not the answer you're looking for? Browse other questions tagged civil-engineering geotechnical-engineering or ask your own question.

3
What are the solutions to water problems in a retaining wall
12
Low cost, moderately accurate water depth measurement
23
What is the purpose of these "steps" in rivers?
0
Equipment or method for borehole
1
What is the physical meaning of Cumulative Passing% in Grain Size distribution?
4
Drilling holes in ground and fillin with gravel - to what ends?
3
What is the curing process for polymer concrete if it doesn't use any water?
2
What are these "water fountains" in the middle of a river in North Korea? (Probably also found elsewhere.)