I'm interested in printing a working two degree of freedom planetary gear set. I searched around and found a paper from University of Maryland in 1988 (source). I am having difficulty translating the information into a real-world model.

The goal is to make a system that allows two independent inputs to affect the speed and torque of a single output. As the paper points out, a differential system doesn't quite make this possible.

Although mechanical systems with multiple inputs or multiple outputs have existed for many years, generally, they have been used as a series of one-DOF devices rather than as true multi-DOF mechanisms. For example, the automotive bevel-gear differential, a two-DOF mechanism with one input and two outputs, is made-up of a one-DOF gear train in series with its gear box.

I tried analyzing a standard differential system but I don't believe you can alter it to use two independent inputs. The six link systems described in the paper seem to be the right direction, and so I would like to understand the graph.

Here is the figure from the paper: 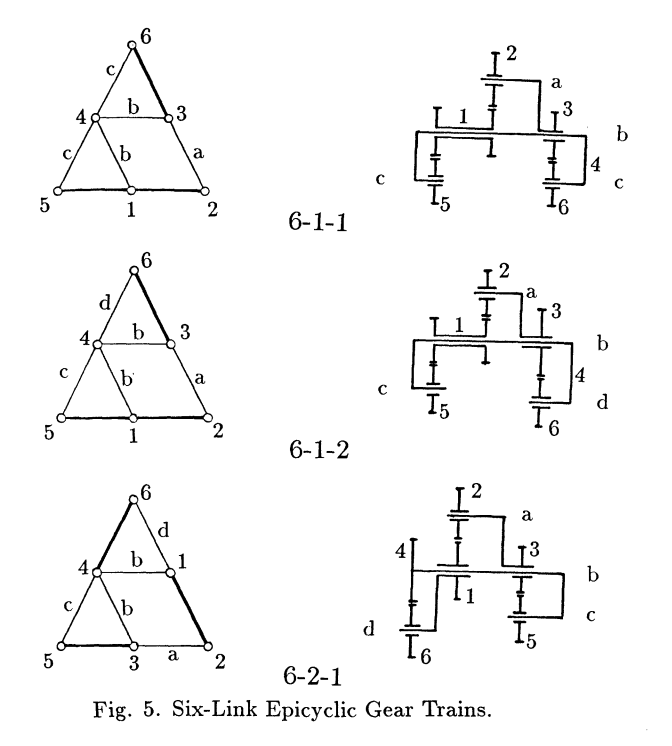 And here is my attempt to interpret graph 6-1-1: 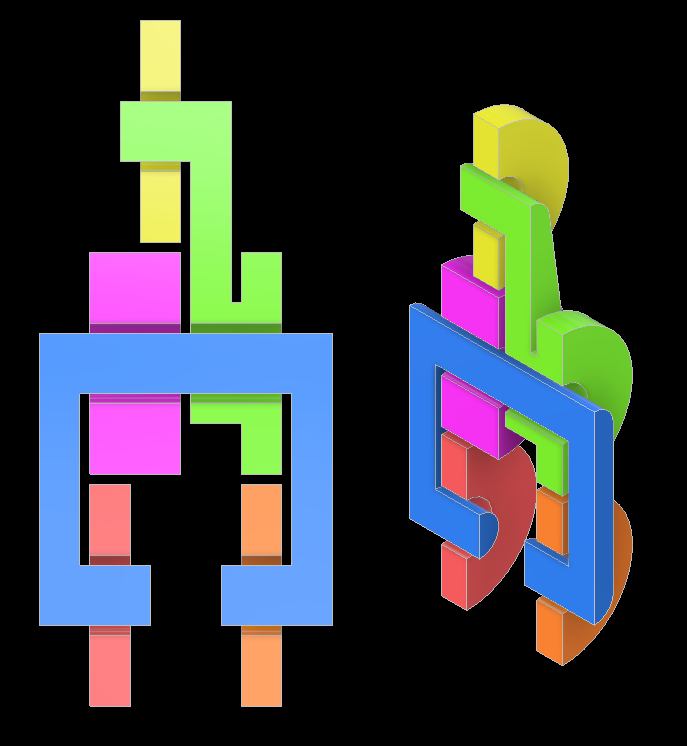 I think this is clearly incorrect because elements 5 and 6 have no effect on the system. Could anyone help me interpret the graph?

Your model looks mostly accurate, your gap between gears 5 and 6 isn't large enough though. What are you treating as your inputs and your outputs? If you start your analysis like that I think you'll see the effect 5 and 6 have on the system.

Machinery's Handbook has some basic examples of epicyclic systems with 2 inputs.

After help from jko I was able to put together a working model for a six link epicyclic gear system. It is essentially three standard planetary gear mechanisms tied together, each with a sun, four planets on a carrier, and a ring gear. I color coded the important interconnections:

1) Blue: The left and right planet arrangements share a common carrier. This double-sided carrier is also the main axis of rotation. The two parts making up this carrier mesh and their rotation is coupled.

3) Red: The left sun gear is also the middle carrier.

12
Thermoelectric Technology to Harvest Energy from Internal Combustions Engines
6
What is the use of gears in a device with a fixed gear ratio?
2
Using two motors and belt drives to drive one shaft
0
How can you calculate the torque and speed of a single output gear being driven by two different input gears?
0
Calculating the output torque of a two-input epicyclic gear system