Derivation of the stiffness of a uniformly loaded cantilever beam

The stiffness of a uniformly loaded cantilever beam is given as follows:

I am trying to derive the stiffness, but I am facing a problem. I would be glad, if someone could help me out.

What I have done so far:

From my understanding, the stiffness $k$ is defined as: $$k = \frac{F}{\delta}$$ where $F$ is the force that moves the beam at a certain point by $delta$

Hence, I calculate the tip deflection and the equivalent point load at the tip and use those two values to get the stiffness.

I know that the deflection curve is:

For the equivalent force at the tip, I do the following: 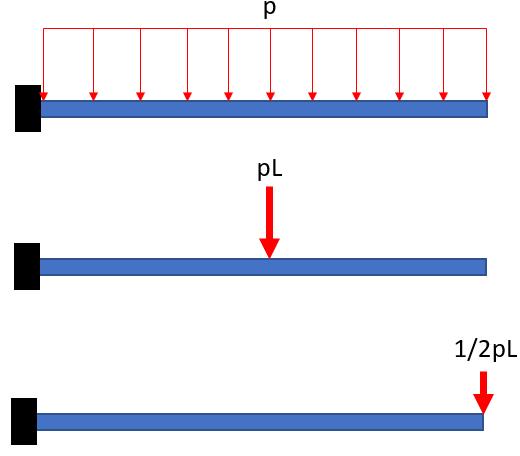 But then I end up with the following stiffness:

You came so close to the answer, you ran right past it!

As you've said, the stiffness coefficient is defined as force over distance: how much force you need to apply to deflect an object (a beam or a spring, for example) in a given way a certain distance.

As you correctly derived, the deflection at the point of a beam under a distributed load is

Now, that's actually basically the answer right there, actually. It's saying that if you apply a distributed load $p$ over a beam, it will deflect in a given way a certain distance $\delta$. That's really close to our definition of a stiffness coefficient above, except that here we're talking about a distributed load instead of a force.

So, how can we convert this distributed load to a force? You actually tried too hard. All we have to do is calculate the total load $P$ created by the distributed load, which you correctly derived as

And we're done. There's no need to perform any sort of transformation to the force's location or anything. If we just plug that into the deflection equation, we get

So calculating the stiffness coefficient is the easy step: calculate the deflection at the desired point, sum up the total force applied throughout the entire structure, and then divide the deflection by that.

you may not substitute distributed load with a concentrated load for deflection. in your case the deflection of the original loading if we call $ \ \omega L=P \ $ is:

As we see the substitution has lead to 1/6 reduction in the reflection and that's is how it should be because of the fact the parts of the distributed load past the center of the beam are more effective in bending it than those on nearer to the support with less moment.

4
Removing beam deflection through axial force
6
Fragmentation of a curved cantilever beam under compression
1
How to calculate area of cross section needed to sustain a point load on a beam?
5
Shear Force Diagram of a Simply Supported Beam with triangular load distribution
2
Timoshenko Beam Theory for Quasistatic Cantilever Beam: Shear Term
2
Deflection of a cantilever beam composed of separate (not bonded) planks
3
How does stiffness/rigidity affect the bending moment of a beam
1
Stiffness of a cantilever beam