How can a clutch engage gradually without wearing away very quickly?

Here's an animation of a gearbox and clutch from Wikipedia.

I learned to drive recently, and was surprised at how the clutch worked, engaging gradually as I moved the pedal by fractions of a millimetre.

How is this possible? It looks like the gears would be pretty quickly stripped away.

As suggested by the comments, there are a couple of missing factors in this animation. The first is there is no clutch being shown. A typical transmission involves a means of disengaging the power to the transmission.

The other factor that is missing is that the parts are rotating (other than from a standing start). The parts being coupled are rotating at different speeds and only need to match up with each other. In a standing start environment, having the clutch engaged means the first set of couplings are not spinning.

As referenced, an automotive transmission also has synchronizing devices and can be described as synchromesh.

The devices internal to the transmission create rotational pressure to the gear that is about to be engaged, bringing it up to speed or slowing it to match. There is a clear and concise video online about this process. 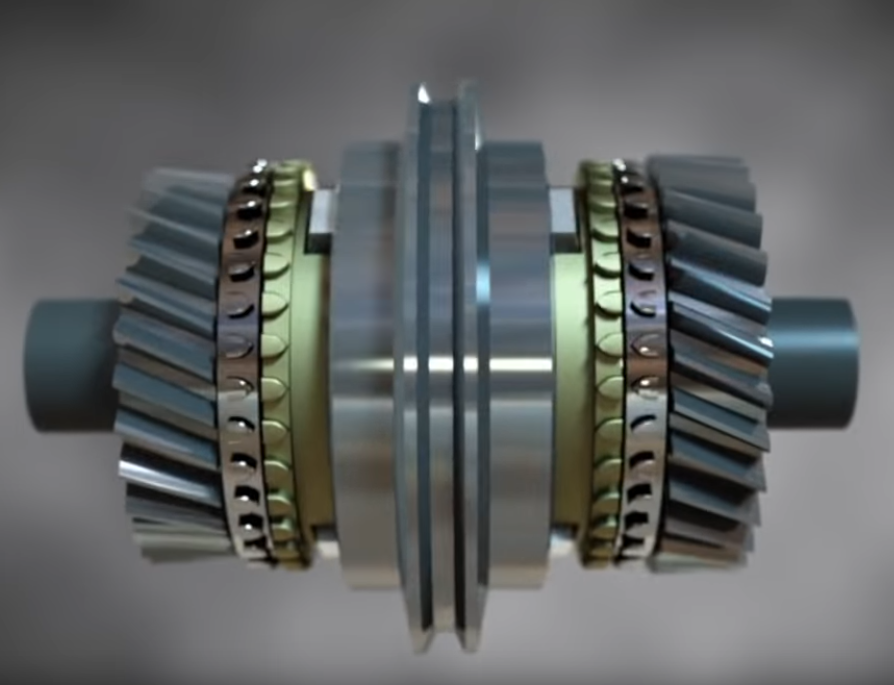 Another site which includes also a video is even more illustrative of the process and resembles your animation. One aspect of this particular link of note is that more clearly represents the clutch-like action of the synchronizer ring. 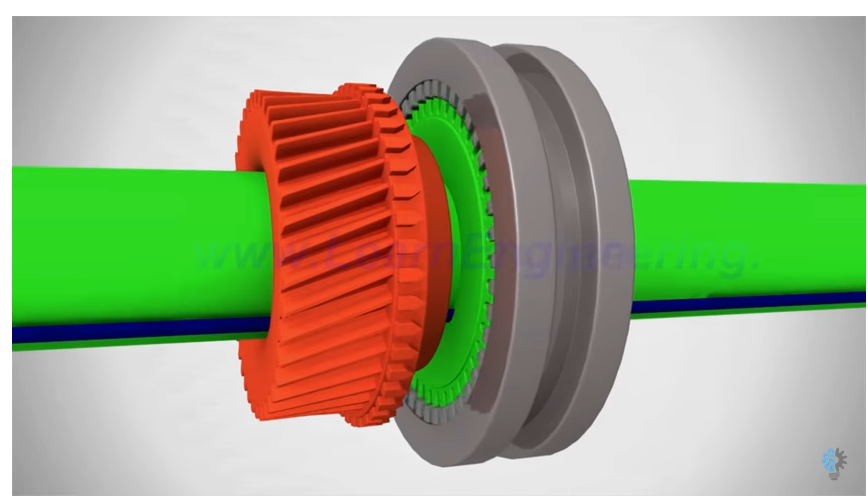 In the case of older motor vehicles, prior to the development of synchronizing devices, an upshift was performed by shifting to neutral, removing one's foot from the accelerator pedal (slowing the engine speed) and the clutch which also slowed the input transmission shaft, allowing for a closer match to the next gear. The clutch would be again engaged with minimal clatter/damage/wear.

For downshifts, one shifted into neutral, foot off the clutch, apply pedal pressure to the accelerator to speed up the input to the transmission, then clutch again and engage the lower gear.

Many semi-trailer tractors did not have synchronizing for years after the implementation in automobiles. As a youth, I would listen for the downshifts of semi-trucks approaching stop signs and traffic lights. The gnashing of transmission teeth would tell you the driver was not yet skilled in matching input/output speeds.

For such a simple mechanism, much is accomplished for today's manual transmission operator.

You missed an important part: The clutch

Your intuition is exactly right that the gears would quickly shred themselves if that was the only thing bringing them into synchronization.

But if you hadn't noticed, your drawing accounts for only the shifter in the middle of the console. That drawing does not cover that pedal to the left of the brake - the one you were commenting on. This animation does: It's the huge orange disc. It is disconnecting the entire powertrain from the engine.

With the clutch in, and shifted into neutral, the green gear and blue (here) shaft are disconnected at both ends, and continue spinning only because of their own inertia.

Now, if you're doing a normal up-shift into the next taller gear, the gears will match up when the blue shaft is spinning slower than it did in the last gear. The blue shaft only weighs a couple of pounds, and will soon spin down all by itself, slowing through and past the optimum speed for sync-up into the next gear.

Modern fuel-injected engines with long intake runners can manufacture useful torque at quite low RPMs. As a result, in the hands of a competent driver, a clutch can take a lot less wear & tear than it used to, and could potentially last the life of the car. While that's a fine thing to aspire to, it's not that big a deal if you clutch wet and sloppy. They're not that hard to access to replace.

Clutches sit between the engine and transmission. You must pull the transmission off the engine to service or exchange the clutch. That's not a simple job, because you have to get driveshafts out of the way (a bigger annoyance of FWD cars)... but it's also not a particularly brutal job, and it can be DIY'd. Unlike a modern automatic transmission, a manual gearbox is liftable. You can pick up an econobox transmission with one hand.

This just shows gears and synchromesh... no clutch operation at all.

The clutch pressure plate moves some 5 millimetres or so but the pedal quite a bit more. The plate will slip until sufficient pressure is applied by the pressure plate. This is where the rapid damage is caused by those who “ride” the clutch ie use the clutch pedal as a footrest or slip the clutch too much especially when reversing or manoevering...

As you get experience you can easily feel the bite point and be able to move off smoothly.

And you get to the point where you can change gear and it is all so smooth the passengers don’t notice - long gone are the comments “did you fill up with kangaroo juice?”

It depends on what you mean by "gradually" ? For an automobile if it slips (much) less than a second , wear is minimal. As a boy I had an oversize clutch , I let it slip ( less than a second, but too long ) and burned off the lining in a month. I slipped it because spinning the back wheels seemed too aggressive - wrong! Slippage , especially between gears should be very brief.

Not the answer you're looking for? Browse other questions tagged mechanical-engineering gears transmission or ask your own question.

8
How can I get a stepper motor to engage with a freely spinning wheel?
2
Center of Gravity of Precast Concrete Steps
2
Why do small gears used to turn big gears allow more force with less effort?
3
How can I build and maintain an accurate pressure on a fuel line without using a fuel pump?
3
Friction clutch and the force required
3
4 Gears in a Circular Pattern - Calculating the Proper Distances for Meshing
1
In static equilibrium body, how can an applied moment about an axis contribute to reaction moment to another point away from the axis?
2
How do I calculate how many newtons a hollow rod can carry without buckling?