Is it possible to "boost" a WiFi signal using an aluminum soda can?

I recently discovered that one of my roommates had attempted to boost the WiFi signal by cutting up a soda can and placing it near the router, like this: 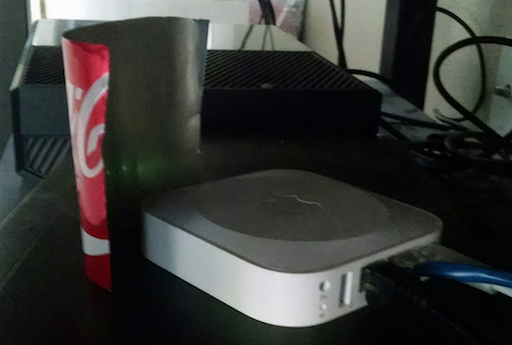 My roommate was probably following an internet guide like this one, which advises shaping the modified can "like a radar dish" and placing it around the external antenna of the router. However, our router has no external antenna.

Will either configuration actually boost the router's reception? I don't know too much about antennae, but I suspect that the second configuration works more like a shield.

What you show is a crude reflector. Yes, you can use reflectors around a antenna to get more power in a particular direction at the expense of other directions. This can be useful when the other antenna is in a known direction.

However, there are several problems with this:

Don't believe every hairbrain idea you see on the internet.

This might work to boost the signal in one direction, but it will reduce it in other directions. Antennas are often built with elements (like your drink can) that couple to the primary radiator. These act as "Directors" or "Reflectors". You see directors on a classic TV antenna - All the cross beams along the main beam of the antenna. You see reflectors on Cell Phone towers, where a tall corner sits behind the radiator to direct the signal in small angle. These both act to increase the signal strength in a particular direction. This is at the expense of signal strength in other directions. A correctly placed can like in your picture could act as a reflector, increasing signal strength in the direction it faces, at the expense of signal strength in other directions. Whether this works depends critically on the size of the reflector, and the position of the reflector relative to the primary antenna. Bear in mind this is much more likely to just reduce the signal by interacting with the antenna impedance, and reducing the quality of the match between the radio and the antenna. Like the comment above says - Experimenting will tell you which one you have.

All of these cans are made up of Aluminum. Aluminum is a good conductive material and a dense material. More dense material means more capability of conductance. They can be used as antennas to transmit the signals but I am not sure whether this thing improves the WiFi signal strength as I had not tested it by myself.

But one thing that makes sense to me is as it is made up of aluminum. It can be used to catch the signal and send it though and it is inexpensive as you see. It is just an extra layer that just increases the range a little. But you cannot say its a good replacement to those boosters available in the market.

I had not done much research about it but I can say this with my common sense.

It is too small a surface area to be an effective microwave reflector. The shape is wrong too, it must be parabolic with respect to the transmitting fractal antenna of the router. Yours is perpendicular to it.
http://www.instructables.com/id/Easy-to-Build-WIFI-24GHz-Yagi-Antenna/

With the advent of embedded fractal antennas, we no longer need external antennas sized according to the wavelength of the carrier frequency. A good development or we would have to be carrying around antennas for our cell phones. I'm not saying you can't shape an aluminum can to enhance directional transmission and reception. It just takes some design and calculation.

Not the answer you're looking for? Browse other questions tagged electrical-engineering signal wifi or ask your own question.

6
How can I filter out a signal while extracting only the desired one?
7
How can I find the emission power of a WiFi mobile phone antenna?
16
Can wifi signal reception be improved by opening a door?
0
How far can my FM transmitter signal reach?
1
Can a signal below -176 dbm be decoded?
1
classify ECG signal using neural network