I didn't understand the second part of last sentence in paranthesis, where it says "....or decreases compression that reduces column bending strength".... what does this mean and why?

For a symmetrical column with maximum bending stress $B$ and compressive stress $C$, the combined stresses range from $C+B$ on one side of the column to $C-B$ on the other side.

If $C$ is reduced, then $C-B$ reaches the design limit (in tension) for a smaller value of $B$.

In a concrete column with bending moment and compression, the tensile stress is reduced and the compression stress is increased by the shift of the neutral axis location. However, this condition is OK because for ductility concrete members are designed to fail on the tensile stress because of the large stretch the steel re-bars take before the yield point.

But when during the earthquake the compression decreases the tensile stress goes back up and because of the lateral forces of the quake there is likely even more moment applied to the column and more tensile stress which could be in excess of design stress, refer to the diagram. 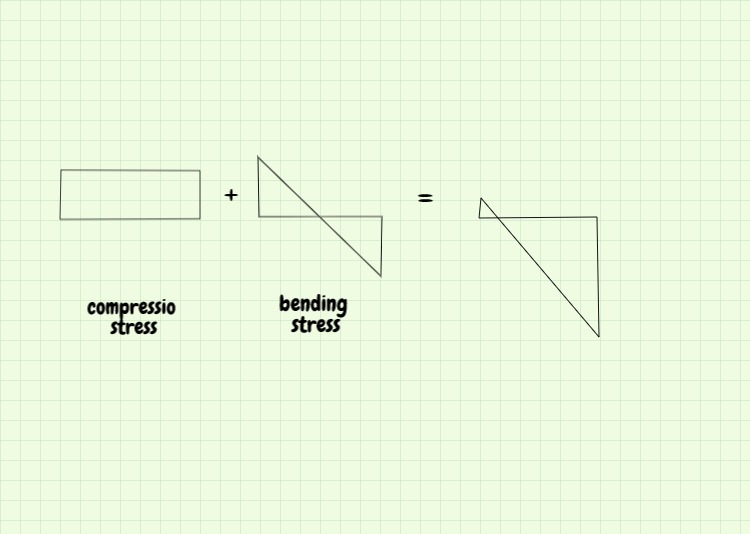 So the answer is for this instant: When there is already a lateral earthquake force which may crate tension on a column, MINUS gravity compression, PLUS the UPWARDS acting earthquake vertical force. (Or sometimes there can be moments on top of columns even before earthquake due to load distributions on beams which would put one side of column in tension already and when an UPWARDS earthquake vertical force act on it, it will put further tension demand on column)

2
ASCE 7-10, Fluid load factor for basic combinations for strength and allowable stress design
2
What's the difference between critical load and yield stress, and failure in general?
4
How to provide lateral support for adjacent masonry during installation of steel UC in an old cavity wall?
14
Why does column buckling occur when the load is parallel to the column?
2
Does the volume change under the tensile or compressive stress?
1
column yielding under earthquake