How do protective coatings affect the lifetime of bridges?

I'm trying to understand the importance of protective coatings on steel structures like the Golden Gate Bridge. For example, if we stopped maintenance on the Golden Gate Bridge today and left it packed with empty cars, what would be its expected lifetime (until a car falls into the water) and the variance of that lifetime? If we additionally removed all of the paint/coatings on any steel parts, what would be the expected lifetime and variance? I'm hoping for a rough answer from an expert in the field.

If you are really considering catastrophic failure, what you are asking actually has several parts. The first is the coatings aspect, the second is the metal structure, the third is the connections, the fourth is the cables, the fifth would be the substructure and the sixth is the foundation. A failure of any one of these systems (with the exception of coatings) could lead to the type of catastrophic failure you are considering.

The Golden Gate Bridge was constructed in the mid to late 1930s (around 1933 to 1938 I believe, see timeline) and I will come back to this in later paragraphs.

It is important to note that the loading conditions currently on the bridge in terms of axle loads and traffic volumes are perhaps magnitudes higher than the original designer could have envisaged. These loads will have a significant impact upon the risk of catastrophic failure, and for this reason there has likely been significant structural strengthening carried out in the Golden Gate Bridge over the years.

One thing that I noted on the timeline was that there already has been a catastrophic failure of the upper and lower decks due to a 7.1 earthquake on October 17, 1989. 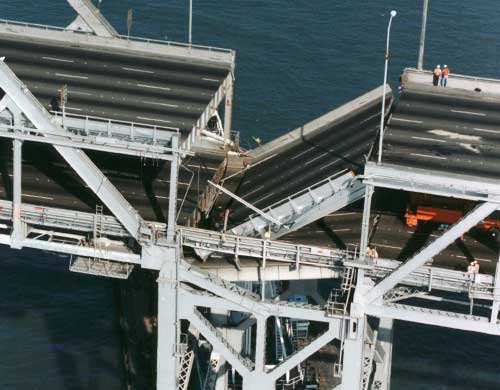 Generally speaking coatings are designed for a given service life. Provided that they are applied with adequate workmanship and quality, for a given material in a given environment the performance is fairly predictable; ie they will lose their protective capability over time due to oxidation, temperature, solar radiation and abrasion effects. Many designs are geared towards a certain loss in terms of mils/yr, so that for a 10 year service interval there will be a certain dry film thickness of coating specified. NASA Kennedy Space Center has detailed documentation on these issues. Once this protective measure is breached then corrosion of the underlying steel may take place. So it is important that coatings are renewed at regular intervals.

Structural steel generally has a well defined atmospheric corrosion rate for a given environment and this is based upon it's proximity to the sea. Studies done by NASA in Florida on metal coupons from seafront to a distance inland about 30 km indicate that the danger zone is within roughly 1000 m of the sea. After that the atmospheric corrosion rates dropped off significantly. But the Golden Gate Bridge is clearly within a danger zone. From NASA data, Pont Reyes, California would have an expected atmospheric corrosion rate of about 20 mils/yr. Certainly Caltrans will have similar research data. If left unprotected by coatings, and if this number were valid for your immediate environment, then you could take the thickness of the structural section and reduce exposed surfaces by 20 mils/yr to roughly estimate what would happen to an unprotected structure with time. Of course the NASA studies are using modern grades of steel, the Golden Gate steel was produced in the 1930s, so there could be a greater annual loss. This is atmospheric corrosion; the structural steel that is within range of the seawater spray and splash zone will actually experience a more severe corrosion condition, and protective measures there will likely include sacrificial anode systems in addition to coatings. That is, an anode material such as zinc is electrically connected to the structural steel in seawater spray exposure zones because it is more susceptible to corrosion. It is sacrificed in order to direct corrosion activity away from the structural steel. These also must be replaced at intervals. There are also impressed current systems too, these are called cathodic protection and they work in a similar fashion.

Now what does this mean for the structure? A structural analysis would be required to determine where the critical loading point occurs; ie where the force of a fully loaded bridge would exceed the ultimate loading capacity of the corroded, diminished sections. When structural elements oxidize, the oxidized portion of the section can no longer support load, and the remaining sound steel under the corrosion product is the issue of importance. But you can see that if coatings/protective measures are not reapplied when required then the corrosion rate of structural steel could endanger the structural capacity of the bridge very quickly, perhaps within a few years.

Structural connections are very sensitive to fatigue and this also exacerbates their sensitivity to corrosion. In other words elements of higher stress cycling are also more susceptible to corrosion. The two factors are quite significant in determining lifespan. For this reason, and I do not have any specific knowledge of this matter for the Golden Gate Bridge, I suspect that the connections in the bridge today have been essentially entirely replaced, perhaps several times at high stress locations, since initial construction. These are the most critical part of the structural steel framework for the bridge, from a load and lifespan perspective. If they fail, then catastrophic failure follows. It is also possible that additional protective measures are taken for the connections in terms of additional coating thickness or specialized treatments.

The Golden Gate Bridge is a suspension bridge so the cables are an integral part of the load capacity of the structure. These cables normally would have a protective sleeve around them to ensure that they are isolated from the environment, and cable sleeves today are typically filled with protective lubricants. I do not have any knowledge specific to the Golden Gate Bridge but I would expect that the design does include protective sleeves, at least for the main cables. Corrosion of cables can very quickly lead to very serious structural problems and for that reason they are inspected frequently. One of the problems with sleeved cables is that the cable itself is hidden from view, unlike other elements of the bridge, so the inspection would require non-destructive techniques that may include ultrasonic and radiographic testing. I am not aware of any loss per year allowances for cables, if they show any signs of corrosion then I would expect they will be scheduled for replacement or repair.

The concrete substructure (foundation piers) elements would take the brunt of the most severe exposure condition, that is sea spray and splash zone. Wetting and drying conditions in the sea environment are the most corrosive. Here any exposed concrete may degrade at the surface due to salt scaling effects and this, along with carbonation (ie conversion of calcium hydroxide to calcium carbonate in the concrete) can reduce the effective protection of reinforcing steel in the concrete by reducing the thickness of the protective concrete cover.

There are generally well known formulas for concrete in sea splash and spray zones for time to corrosion of reinforcing steel. Pioneers in this field (among many others since) were Beaton and Stratfull (1962) and Stratfull (1964 and 1967) of Caltrans. More recently Collepardi and Clear have introduced improvements (Collepardi introduced diffusion theory in the early 1970s and Clear's work in the mid 1970s was a refinement of the Beaton and Stratfull analysis). These formulas are used at the time of design and can be used throughout the life of the structure for estimating remaining life. This has to do with the concentration of chlorides with depth in the concrete, that are carried into the concrete by seawater and increase in concentration with time.

For this reason protective coatings and other systems such as cathodic protection are used to prevent reinforcing steel corrosion. I would suspect that one or more of these treatments are in place at the Golden Gate Bridge, and I would also expect that portions of the concrete and reinforcement have been replaced in the past.

Nonetheless, if the corrosion were to be left untreated in the substructure then there could be a very serious catastrophic failure. If left completely untreated, the concrete of the type used on the Golden Gate Bridge in the 1930's would probably reach a critical stage within 25 to 30 years. The age of the bridge, being some 75 to 80 years of age means that this substructure concrete has likely had substantial repair, replacement and protective treatment by now.

Concrete foundations, if permanently below the low tide line, generally are not at high risk, but can present problems. It is not commonly known, but the concrete of foundations of the Golden Gate Bridge contain Pozzolans, which was an advanced technique for its time. Pozzolans are usually added for improved durability, but they can play a major role in reducing temperature related distortions that can lead to cracking. 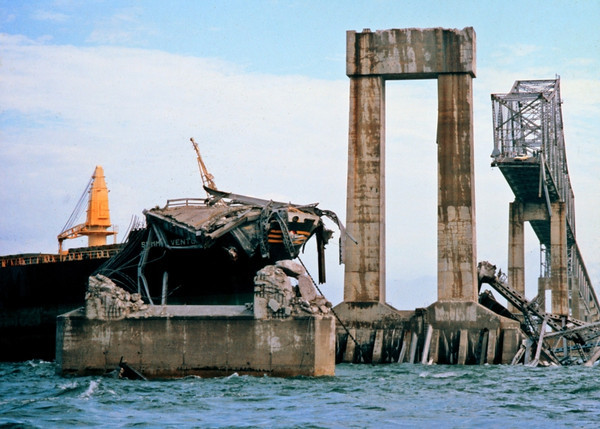 In fact one of the more tragic bridge collapses in history occurred for this very reason during May 1980. The Sunshine Skyway Bridge in Tampa collapsed killing 35 persons. The engineer's investigation concluded that the cause of the collapse was directly attributable to cracks in the below water pier foundations due to the high temperature of the concrete at the time of construction.

The goal of using protective coating/paint is to reduce corrosion of the metal framework. The degree of corrosion varies from the top to sea level and depends on several parameters such as salinity of rain/ocean, humidity, avg. temperature, the acidity of rain, so on so forth.

The principle behind protective coatings may differ in terms of layers, but often, a primer containing a less noble metal is applied directly onto the metal whereto a top and even a middle layer is added, which contributes with resistance to UV light, moisture, etc.

If this was insufficient, here is a detailed explanation of the principles of coatings. Here is what I known from courses and through my work at Hempel.

The composition of paint is build from four components: 1. a binder, 2. a solvent, 3. pigments and 4. additives.

To briefly describe why corrosion happens, one must look at the chemistry of oxidation. It is energetically more favorable for a metal to be oxidized. I. e. in the presence of water or air, the following reaction will eventually occur. \begin{equation} \text{Fe} + \left[\text{O}\right] \rightarrow \text{Fe}^{++}+2\text{e}^- \end{equation}

There are generally 3 ways used to prevent the above reaction.

Not the answer you're looking for? Browse other questions tagged civil-engineering bridges corrosion or ask your own question.

5
How many units of HB are used for steel bridges?
11
How accurately are moveable span bridges balanced?
10
Can the structural integrity of bridges be measured in real-time for safety?
10
Does weathering steel corrode the same as carbon steel when it doesn't develop a protective patina?
7
Why are concrete bridges more prevalent than steel bridges in the United States?
12
How can large bridges be made resistant to earthquakes?
2
What is the preferred composition for modern concrete bridges?
19
Why are truss bridges the way they are?
2
How does the parabolic curve help in the integrity of a suspension bridge?