I have been struggling with the following problem for a few days now and would greatly appreciate some assistance.

I'm new to control systems and have very little experience with PD controllers and never heard of the pole placement method so please correct me where I'm wrong.

So I don't see how I can you the standard formulas I have been using:

Like I said I'm very new to this so please forgive me if anything I've said is completely wrong.

Thanks in advance for any assistance. 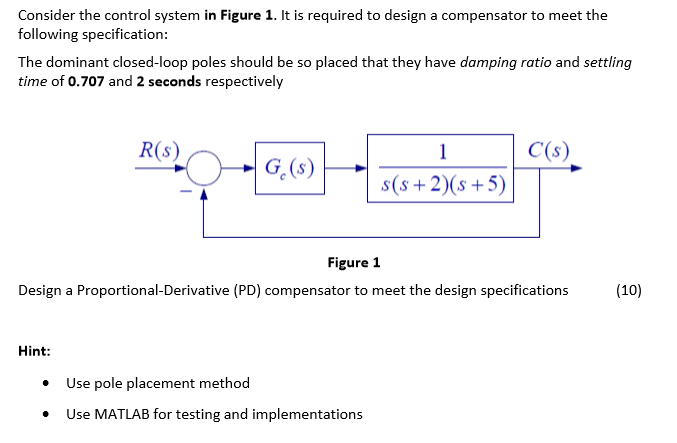 First of all let's consider the aspect of dominant poles. You have to control the plant:

The poles of this plant are located at :

Dominant poles in general are the poles which are closer to the imaginary axis and define the response (behaviour) of the system. In this particular system the poles that are closer to the imaginary axis are: $\ -2,0 $, so we can say that they dominate the dynamic behaviour of the system. It is always good if possible to model a system by a second order transfer (while obtaining the steady state behaviour) due to the simplicity of the math involved in the deisgn process. In order to reduce the system‘s order and simultaneously maintain the steady state response we can bring this system up to the system:

We can use MATLAB to check the steady state responses of the two systems. These are shown at the graph below: 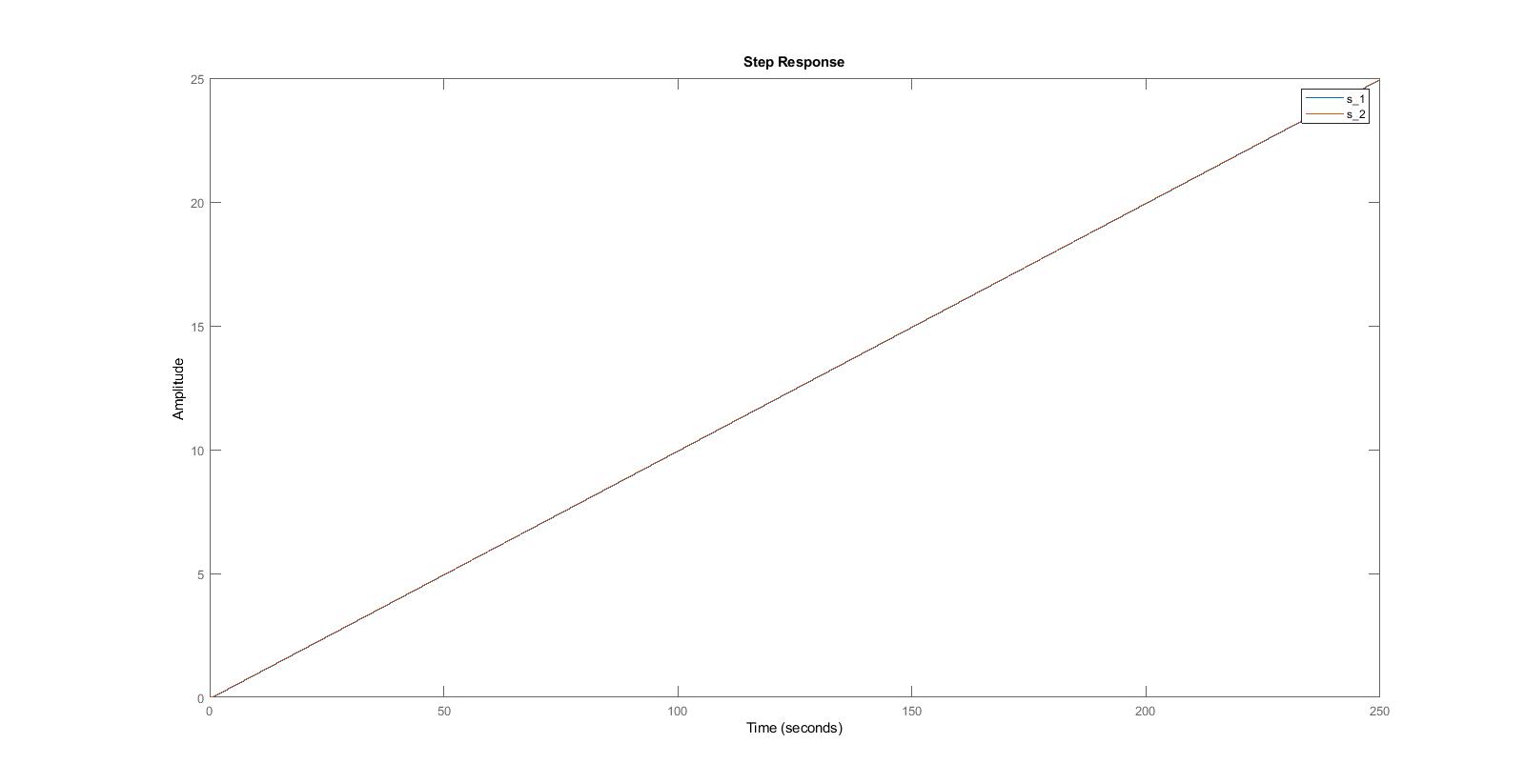 It is obvious that both systems have the same steady state responses. Now, we continue with the design process.

and the closed loop transfer with unity feedback is:

The characteristic polynomial (denominator of the closed-loop transfer function) is:

Second Step: Pick the gains of the controller with respect to the system's design specifications.

Third Step: Obtain the desired characteristic polynomial with respect to the desgin specifications:

Sixth Step: Check the step response to verify the requirements. By plugging in the values for the gains $\ K_p $ and $\ K_d $ to the closed loop transfer function we obtain the following step response of the system: 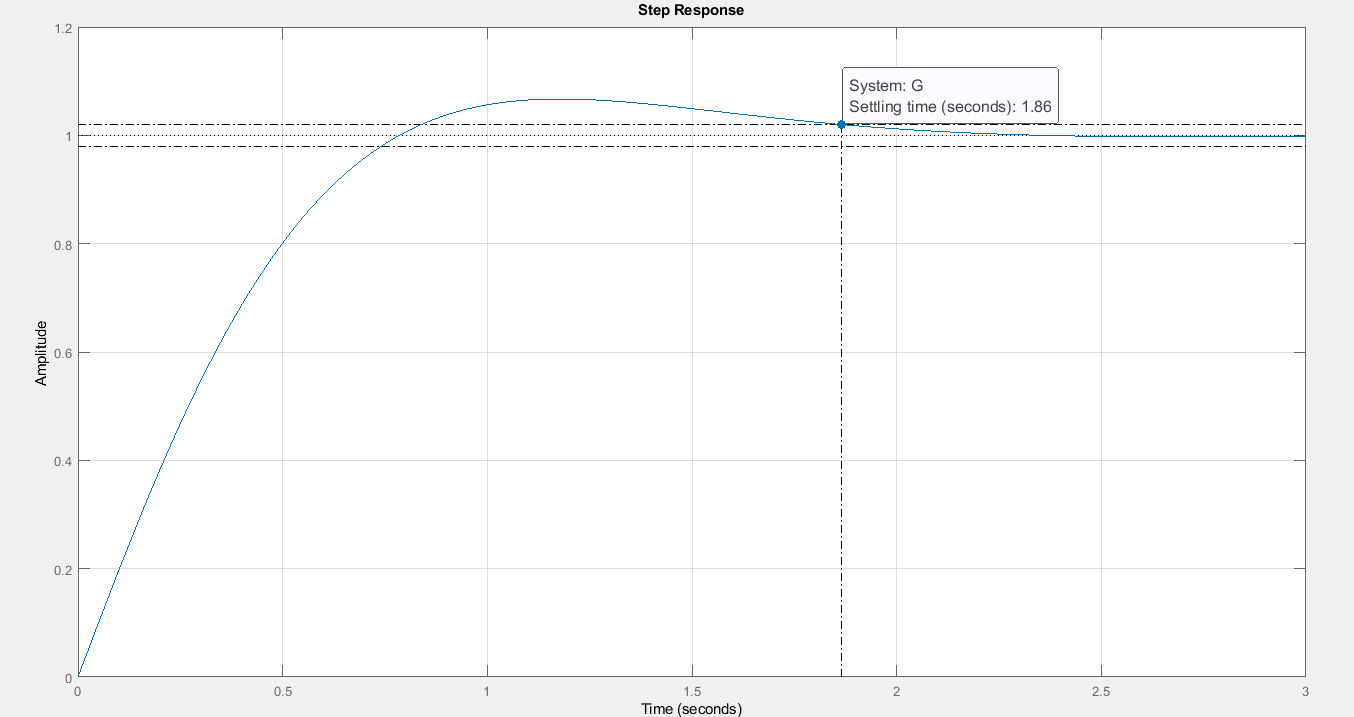 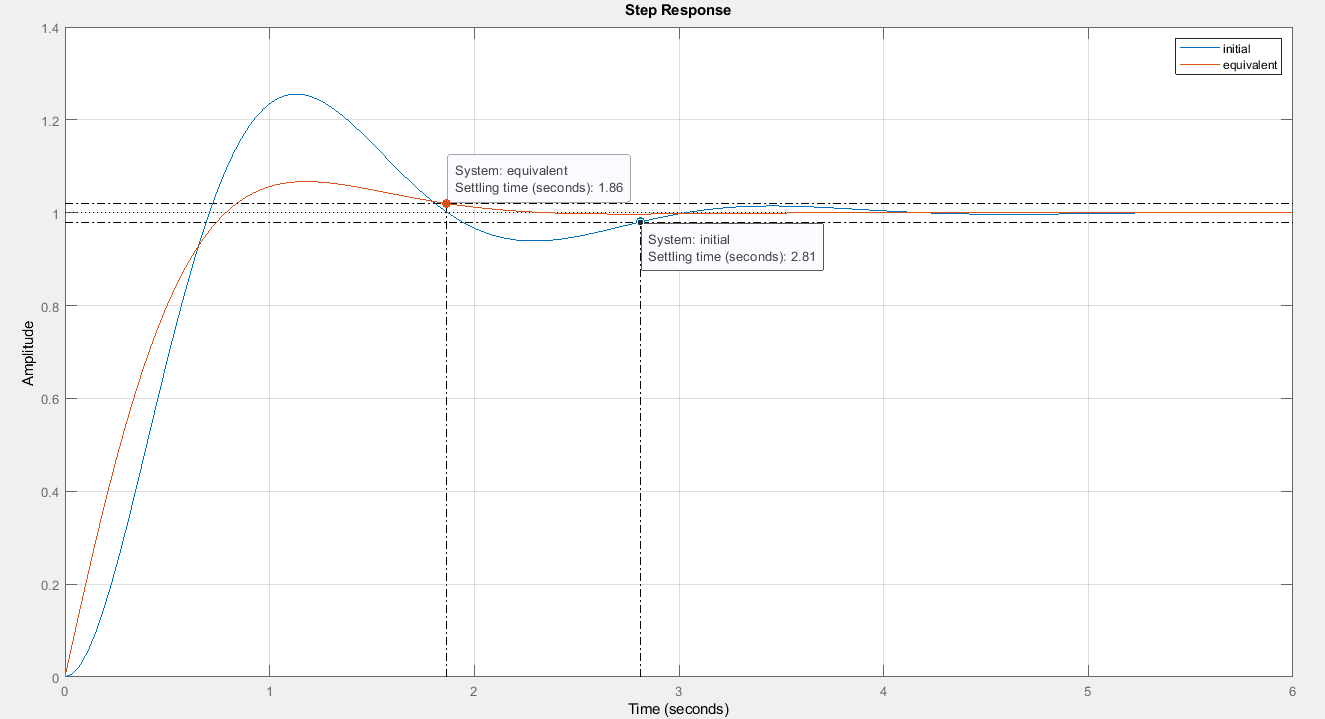 This happens because the third pole of the initial system $\p_3 = -5 $ is not that far away so we can ignore it. It is near the dominant poles which means that it also affects considerably the dynamic behaviour of the system. However, it is important to notice that at steady state the two systems reach the same amplitude which means that the equivalent system we obtained is correct. In general, we can approach a third order by a second order system when the third pole of the third order system is sufficiently further away than the dominant poles. For example consider the following system:

The step responses of these systems, which are similar, are: 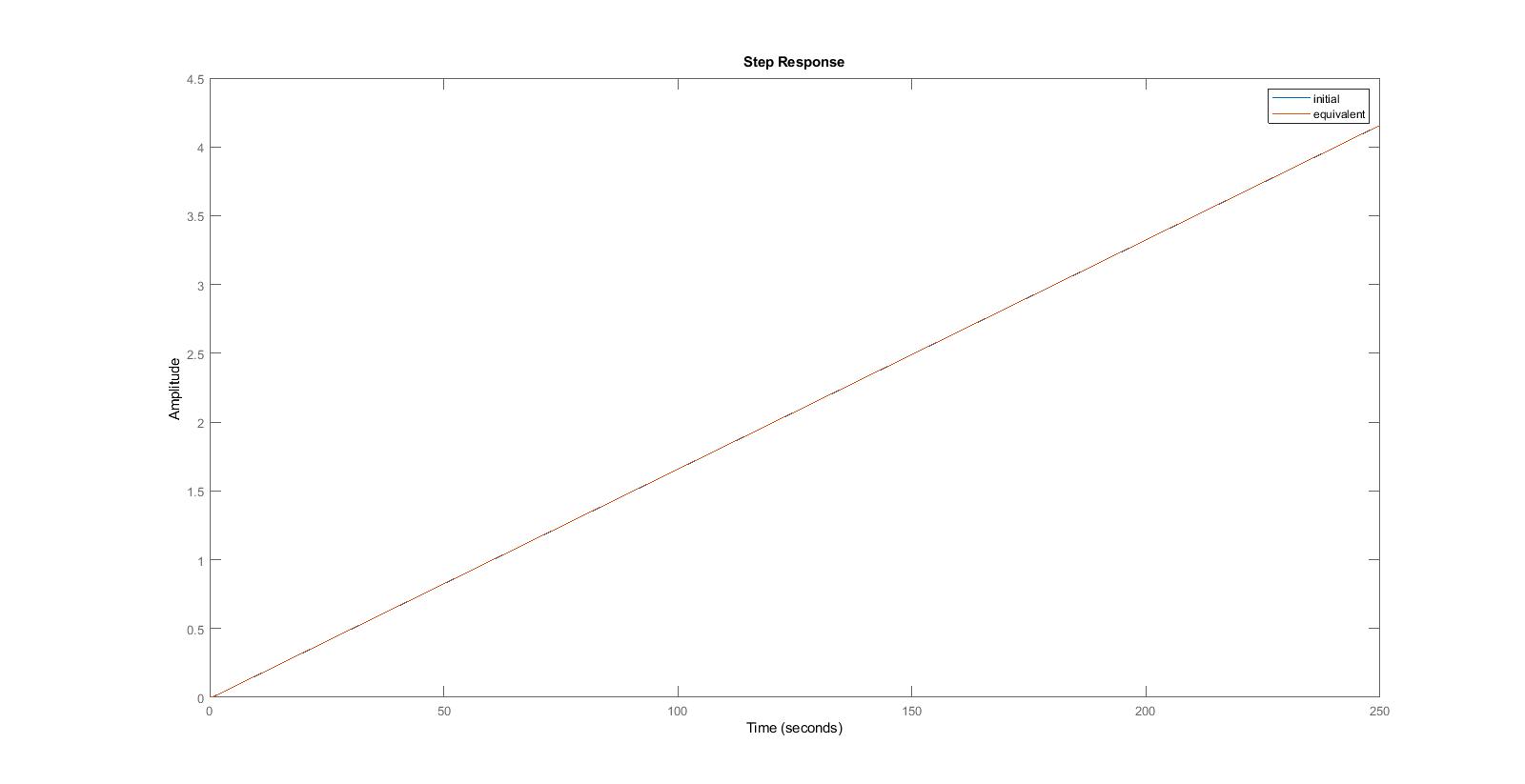 If we follow the same design process, we obtain the following PD controller:

Now, if we simulate the initial third order system and the equivalent second order system in series with this PD compensator (and unity feedback), we obtain the following graph: 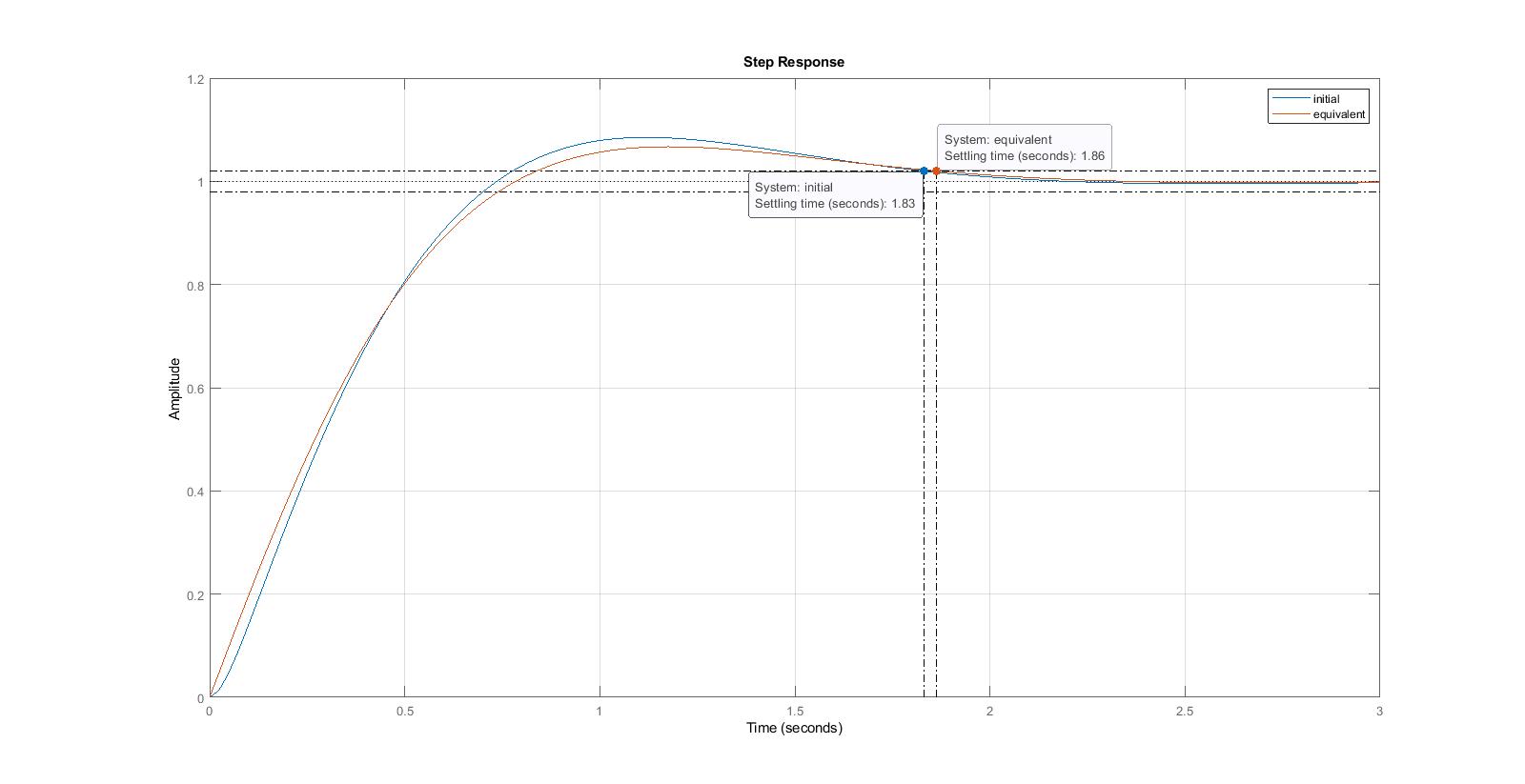 It is obvious that the step responses of the two systems are almost identical. The difference in settling time is $\ 0.03 $ seconds, which is neglectible. In conclusion, the aspect of dominant poles is one hundred percent correct when there is a pole which is enough bigger than the poles which are close to the imaginary axis.

Below, I place some MATLAB code which produces the above results.

5
How does the DERIVATIVE term slow down the signal?
2
PT1 Filter without Derivative
3
Replacing PID with Lead–lag compensator?
1
Why does a proportional controller have to have a steady state (offset) error?
1
Design of a lead compensator with root locus in matlab
0
Why does a lead-compensator type system decrease to a step response
3
Controls Project: Help needed finding 3rd order system