Consider a transmission for a tandem rotor helicopter with two engines and two main rotors such as the one below. 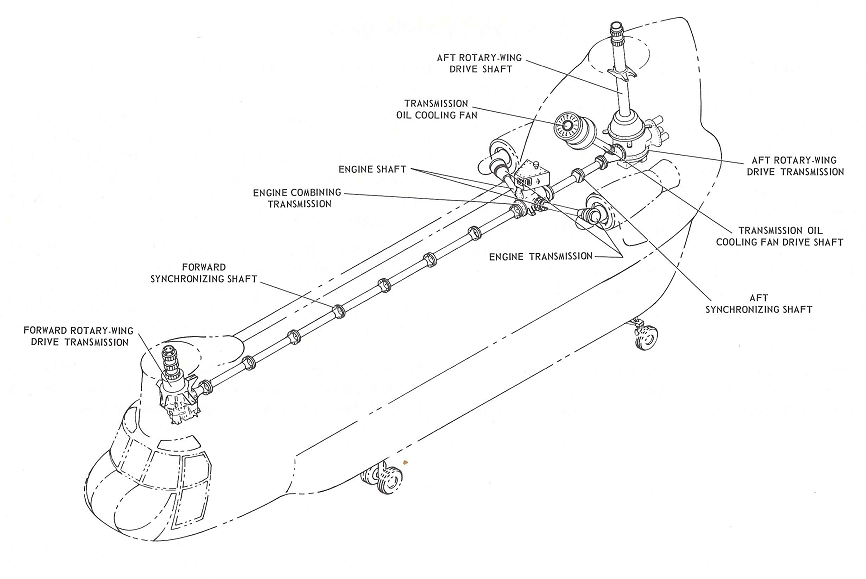 Both engines are connected with sprag (one-way) clutches such that an engine's speed can underrun the rest of the system (e.g. engine failure), but normally they move in sync. The two rotors are always synchronized so they don't collide with each other as they spin (in opposite directions).

Let's assume that we know the moments of inertia for each engine and each rotor. There are accessories (not shown in the picture) which are driven by the same synchronizing shaft and there are of course mechanical losses, but we can neglect all those for simplicity. There is, however, a speed change between the engines and the rotors that needs to be taken into account.

For the case that both engines are operating and driving (i.e. engaged clutches):

For the case when an engine is being shut down and is no longer driving:

In general, for all ridged bodies constrained to rotate at the same speed, their inertias and the torques acting on them can be added together:

Where $\tau_i$ represents the torques acting eternally on the system (like the torque produced by an engine, or the resistance of a propeller by the wind)

You can also model the system as system of equations:

Where $\tau_{ij}$ is an anti symmetric matrix representing the torque at the interface between components $i$ and $j$. The sprag clutches ensure that the torque between the engine and the rest of the system cannot be negative (ideally. However in reality there will be a small drag torque).

Note: if some ridged bodies are constrained to rotate a speed proportional to each other (eg. gears), the same equation can be used, but the inertia, torques, and speeds must be multiplied/ divided by the ratio.

Not the answer you're looking for? Browse other questions tagged mechanical-engineering aerospace-engineering modeling or ask your own question.

6
Could adding extra engines to AMELIA disrupt airflow from the other engines?
7
How efficient are jet engine thrust reversers?
8
Efficiency in a gas turbine or aircraft engine
2
Questions about helicopter rotors - conservation of angular momentum
2
What is the difference between shaft power and brake power?
0
Twin cylinder engine opposed cylinders
0
If the turbine drives the compressor, then what limits the engine speed?