Recently I've begun thinking about experimenting with the construction of a Tesla turbine for steam use. The key issue I can find is that most of the examples out there of such turbines use either optical discs or HDD disks to make the actual rotors. In the case of HDD disks, these work well because they're fairly stiff, but the use limits the size of the turbine to well, the size of the largest common HDD platter (3.5") - that is, unless someone can find me a link to the obsolete 8" platter size. This obviously installs an upper practical boundary on the power level of such a turbine.

One of the key issues against Tesla turbine development historically was the inability to develop both thin and stiffened rotors; while building it thick solves the stiffness issue, it drops overall efficiency.

So, I'm taking the time to actually learn some more about engineering - how is "stiffness" quantified in engineering, and what affects it (other than thickness)? What materials would be good candidates for something such as a Tesla turbine rotor?

I don't know much about the operation of a Telsa Turbine but I can talk in general about what affects the stiffness of an object.

The geometry of the disc and the material of the disc both affect the stiffness of the disc. Smaller radius = stiffer. Thicker disc = stiffer. If you are looking for a trade-off between stiffness and weight then you can employ tricks like ribs or hollow pockets inside the disc. The material property you are looking for is the Young's modulus, $E$. Higher $E$ = stiffer material. You can find a list of Young's Moduli for various materials here:http://www.engineeringtoolbox.com/young-modulus-d_417.html. Modern HDD's are made glass/ceramic composites apparently. If I had to suggest a material and money was no problem, I would say graphene or some other nano-engineered material where you could design the stiffness properties at the molecular level. In terms of affordable materials however, you probably won't be able to find anything better than the HDD platter. Of course you will also need to worry about corrosion resistance, temperature stability, etc. due to the environment in which you are operating.

Stiffness is generally characterized in engineering as the relationship between the force applied to an object and the amount that object deflects: $$\delta = f(F,K)$$ Where $\delta$ is the displacement of the point where the force is applied, $F$ is an applied force and $K$ is the stiffness. In the equation above, $K$ is not necessarily a constant with respect to time or deflection. In fact, it can be a function of many things, including but not limited to the deflection, the rate of deflection, the rate of load application, the temperature of the material, etc. The relationship between force and displacement is often simplified to a linear relationship, where $K$ is assumed to be constant. In this case, K is often called the spring constant. $$F = K\delta$$

If we ignore those more complicated effects, then at its most basic level the stiffness of an object is determined by two things: the material properties and the geometry.

The geometry part is where things get really complicated.

Here is a diagram of how I am picturing your situation: 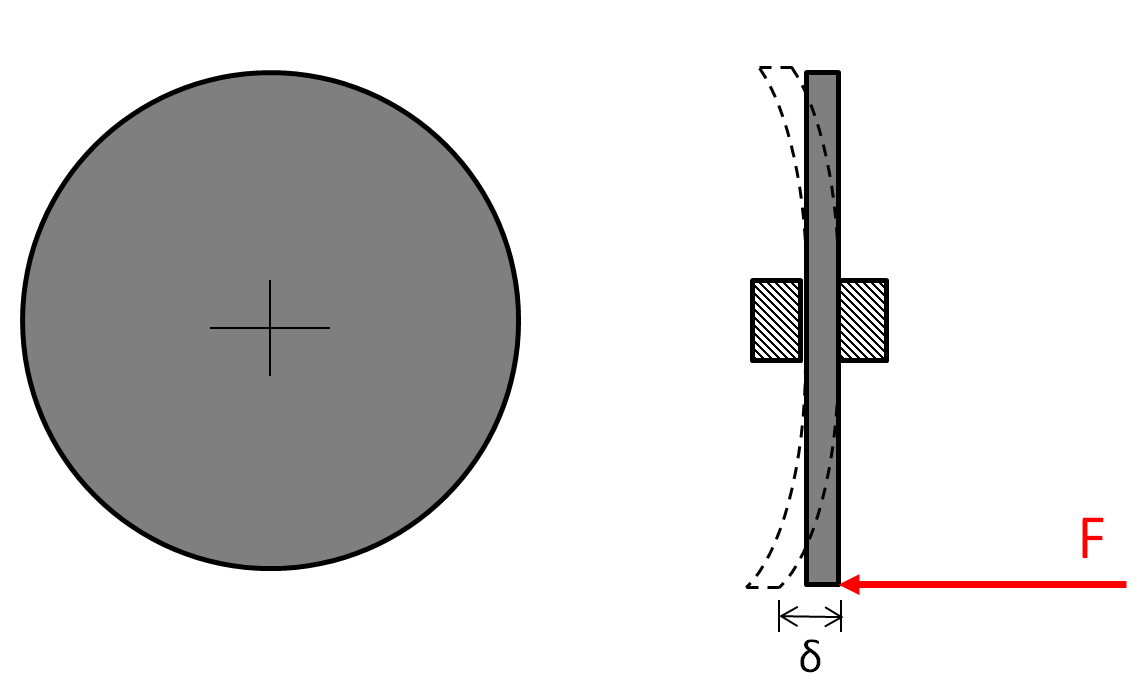 There is a circular disk pinned in the center by some kind of axle. The plate deflects to a new position (dotted line) when a force is applied. If I understand correctly, the stiffness that you are worried about is the "floppy" direction of the floppy disc, i.e. the bending stiffness, as I have drawn it and not the torsional stiffness or compression stiffness.

This is a case of plate bending and here is a Wikipedia article where you can read about how that works. https://en.wikipedia.org/wiki/Bending_of_plates. Yes, the math is very nasty.

To get a better idea of how geometry affects stiffness, I propose a simplified case of cantilever beam bending:

So where does the "thickness", $h$, come in? $I$ is called the area moment of inertia and it is calculated from the cross-section of the beam. In the simple rectangular beam case that I have drawn, $I$ is equal to the following: $$I = \frac{bh^3}{12}$$ Check out my source here: https://en.wikipedia.org/wiki/List_of_second_moments_of_area. That page contains many different cross section shapes. Some are more efficient than others. A cross section that is often used in the construction industry is the I-beam (https://en.wikipedia.org/wiki/I-beam) because it handles bending and shear loads quite well, while also conserving material.

So what can we conclude from the simpler case of cantilever beam bending for our plate bending problem? If you have a solid cross-section for a flat disc, the only ways to improve the stiffness geometrically is to reduce the radius of the disc (analogous to $L$) or increase its thickness (analogous to $h$). If you aren't constrained to solid cross-sections or flat discs then you can use ribs or pockets in your disc to reduce material usage while maintaining stiffness. Again, this is ignoring the more complicated effects that can occur with plate bending.

Maybe somebody else can look into whether or not reducing the radius of the disc will affect the functionality of the turbine. Fluid dynamics isn't my specialty!

Wow. Bit of an essay there. Hope this helps.

As was previously mentioned, a Tesla turbine is attractive from a simplicity standpoint, but it is not the most efficient solution given current material technology. There are lots of other efficiency considerations on a small project like this that need engineering attention. Don't set your hopes too high; if you get 20% efficiency you are doing very well.

If you operate at high rpm; the blades will be in tension permitting very thin blades. This video of a paper table saw blade qualitatively demonstrates how a very thin member can resist deflection. Composite carbon fiber sheets may be a good option. Laser cut thin steel may be your most cost effective. You may need to have the blades cleaned up on a lathe and/or have the finished rotor professionally balanced.

Steam is a very dangerous form of energy. Always pressure test the system with water and have a properly sized pressure relief installed. If you ever plan on selling systems remember that steam is extensively regulated to protect the public; there are many codes you will need to follow. This is the primary reason you see very few small steam turbines.

I am surprised it had not been done earlier. Constant stress design which is also not far away from stiffest designs are Gauss Bell shaped plates/ shims that thin out at periphery varying according to

where $t$ is thickness and $r$ radius. However changing air gap width effect for boundary layer has to be a proper trade-off.

4
What is a tesla turbine and how is it different from other turbines(like pelton or francis turbine)?
7
Is it possible to replicate a Tesla valve in large scale?
1
Does the turbine outlet affect the power generated by the turbine ?
2
how are these radial piston rotors machined
1
Energy calculations for steam turbine