What is the effect of changing the angle of a helicopter flybar?

A helicopter flybar is a kind of gyroscopic stabilizer which acts in feedback to the pitch of the blades. The effect, in words, is that as the helicopter starts to pitch or roll in a particular direction more lift is applied on that side, keeping the helicopter level. These devices are commonly found on the inexpensive RC helicopters which are on sale at all major department stores. An example of the flybar from one of these RC helicopters is shown below. 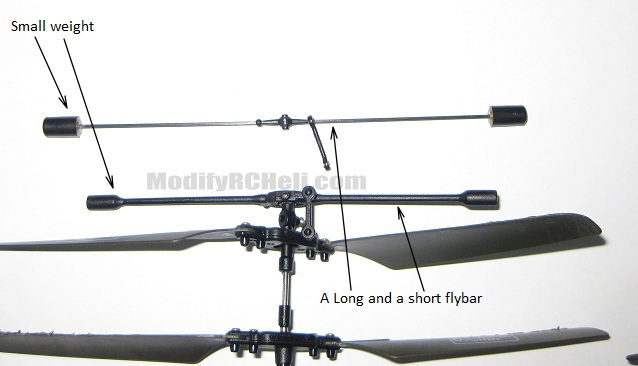 Although it isn't obvious from the picture, there is an angle between the flybar and the rotors. On my RC helicpoter at home the angle is roughly $35^\circ$. I believe that this angle has the effect of introducing extra phase in the feedback loop.

This angle is determined by the lift characteristics of the rotor and the rotational inertia of the whole helicopter. You are exactly correct that the angle changes the phase of the feedback.

For the purpose of discussion let's assume the helicopter has pitched forwards slightly and needs to be corrected backwards, also let's assume a single rotor that spins anti-clockwise when viewed from above.

If we adjust the rotor when it is exactly at the front to give some more lift, the time it takes for the additional lift to overcome the rotational inertia of the whole helicopter would mean that the net effect of the lift was applied at some point to the front-left of the helicopter instead of exactly at the front. The next correction would then be slightly further around, and the next further round again. This would cause the helicopter to oscillate in the same manner that a coin does when you knock it over on the table.

Not the answer you're looking for? Browse other questions tagged aerospace-engineering feedback-loop or ask your own question.

4
Given drive rotation angle, controlling torque, how do I maintain movement speed with varied load?
4
Do all supersonic airliners have a high angle of attack when landing?
12
What is the difference between aeronautical and aerospace engineering?
0
How to determine the banking angle of a quadcopter/helicopter due to unbalanced load along the X-axis?
2
Questions about helicopter rotors - conservation of angular momentum
2
Does gravity have any effect on metal casting?
1
What 's the function of COMP pin(Pin 3) in LM5030 - Push Pull IC?
0
Is it true that points of root locus only satisfiy the angle condition?