How were these candlesticks made in the 1800s?

"Candlesticks" for this question are really just a stand-in for axisymmetric silver, brass, etc structures, possibly hollow and made of thin sheet material? 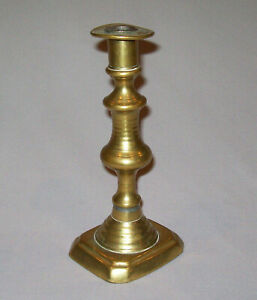 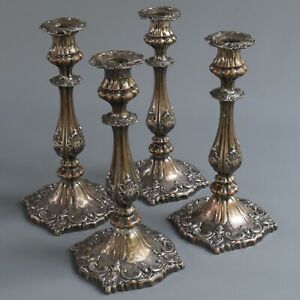 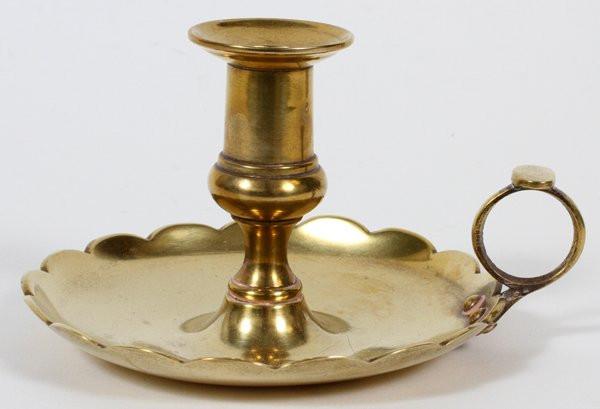 From my research, today we would use metal spinning for sheet material, possibly casting, or turning with a lathe from solid stock are also possible. Hammer forming has certainly been around a long time. But in the late 1700's and early 1800's, it seems like metal spinning was not in common use, and these candlesticks are so ornate that they couldn't have been done only on a lathe. What techniques were commonly used? Where can I learn more about this type of work?

A couple casting techniques not mentioned were "cores" and "lost wax" , both are old. A sand core inside the casting would make it hollow ; for copper alloys and silver I think a 1/4" wall thickness is likely. And for lost wax , the desired item is made in wax , a ceramic cement is poured around it , solidified , then put into furnace to melt and burn out the wax. Then pour molten metal into the hollow. I would add that threaded fastener manufacturer has changed dramatically in about 50 years with the advent of rolled threads and gas carburizing furnaces. As you say spinning certainly looks attractive : For the low power needed for thin copper and silver alloys , could a foot powered lathe ( where it rotates alternately clockwise and counter-clockwise) be possible for spinning ?

Because I'm actively researching this topic, I'll put all of my thoughts in this temporary answer.

The crafts of goldsmithing, silversmithing, and brownsmithing (coppersmithing) would be closely related to the manufacture of these sorts of implements. Techniques involved (and still found today) include:

As seen here, candlesticks can conventionally be made by casting in a foundry. They can be made by hammering techniques as well if the design is simple enough. They are often made in separate halves, which are then soldered together and polished.

Very high quality implements can be made by raising and soldering alone. This is shown by videos such as this one. From the same channel, silver pieces made in parts are also shown, like this. Other techniques in silversmithing that are still technically within the 1800's timeframe can be found in Gee's The Silversmith's Handbook (1886). Here, more specific tools such as the sparrow-hawk, and the snarling tool, are described. Other techniques mentioned include swaging, dooming, spinning, and stamping, which is cited as coming into general use around 1851.

Fastening of elements could be accomplished by e.g. soldering, riveting, pinning, etc, and threaded fasteners were mass produced beginning in the early 1800's. These methods have not changed dramatically. This is relevant as e.g. a rivet appears to be used in the third "chamberstick" shown in the question.

When classical methods were inconvenient, or when mass production is needed, hand-tools are replaced by machining tools. Lathes powered by steam, water wheels, or even horses, were available and used for turning as one would expect. Metal spinning would be a particularly appealing choice, which grew in popularity towards the end of the 19th century; very nice implements can be made with this method to obtain common axisymmetric shapes. A great example of silver candlesticks being made with spinning in a simple way is shown here.

Not the answer you're looking for? Browse other questions tagged metals engineering-history or ask your own question.

25
How are increasingly accurate machines made?
3
How were gears manufactured before power tools, CNC, etc
2
How were multiple vacuum pumps used to raise water over 10m (e.g. by a steam engine)?
1
What were the technical reasons for type bar designs being more common than type wheels for manual typewriters?
1
Why were pneumatic thermostats commonly installed in buildings?
0
What are these metal cylinders often found in the streets of London?
0
Why are/were sewers made large enough for somebody to walk down in there?