I've been working with SC magnet quench simulations. The conductor is made from NbTi in a Cu channel with a 5:1 ratio of Cu:NbTi. Opera3d has a quench program with an example that I began working from. In a quench scenario using a solenoid made from the conductor I described above heat propagates at different speeds throughout the bulk of the solenoid. For this case, heat conduction along the conductor (azimuthal) is fastest. Axial and radial propagation are much slower, with radial being the slowest.

Nonlinear anisotropic thermal conductivity properties are defined by three expressions based on the functions Cu_Kappa(T), Bulk_Kappa_r(T), and Bulk_Kappa_z(T).

For the azimuthal thermal conductivity of the bulk material,the conductivity of copper, Cu_Kappa(T), will be scaled by the copper factor. It is assumed that this is significantly higher than the conductivity of NbTi and dominates the thermal conduction in this direction. The bulk properties radially and axially are to be taken directly from the tables of measured values. (Note that the data used in this example are fictitious, but with similar characteristics to real materials).

So, the values used in the example are claimed to be taken from measured values.

Here is what I've done so far in trying to find the answer: 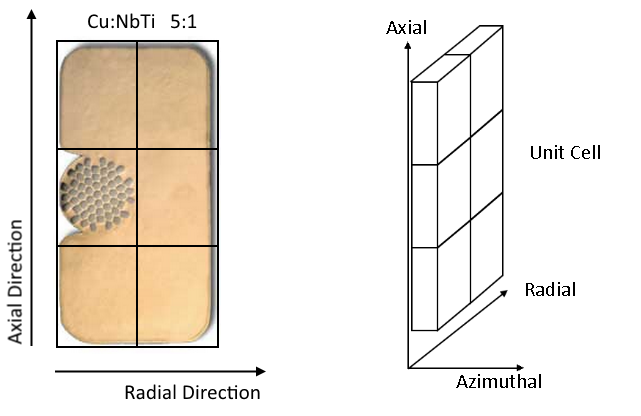 There is one more piece to this, however, and that is the insulation. Around the unit cell there is polyester insulation. It is 0.27 mm and 0.25 mm thick the edges that run in the axial and radial directions, respectively.

I am going to try accounting for this by summing the materials in their respective direction, each scaled by a packing factor.

Does this sound like a good approach? I've spent a bit of time on this already and have no idea if the answer to that approach will resemble the physical model.

You are not too far off with parallel and series resistors method.

The result works for determining a wide variety of composite properties. From Wikipedia:

can be used to determine bounds on your mixture. I'd really run the analysis with both values, and take the most conservative case.

If that doesn't work, I use MIL HDBK 17-3F for analysis. Page 223 shows the equation, which has a slightly larger lower bound by placing additional emphasis on fiber conduction. The insulation can then be added to the radials, again using the rule of mixtures (it's a pretty useful rule).

Unfortunately, I can't help you on Opera3D parameters.

Not the answer you're looking for? Browse other questions tagged thermodynamics magnets superconduction or ask your own question.

3
Ratio between heat transfer coefficient and thermal conductivity
4
Determining behavior of heat exchange system
2
How thick do I need to make the insulation in my homemade furnace?
2
Thermal Conductivity of a Layered Composite
0
Calculating the Surface Temperature of a Cable with known heat flow
0
Carefully attaching Pt-wire to mild/carbon steel surface
1
Heat rate through composite wall with non-constant thermal conductivity