How to calculate the torque created by a rotating motor?

I have watched this video where the speaker explained how the vertical spin of a quadcopter is stabilized, and how it could be unstabilized to make the drone rotate.

Here is a screenshot of the video, with: 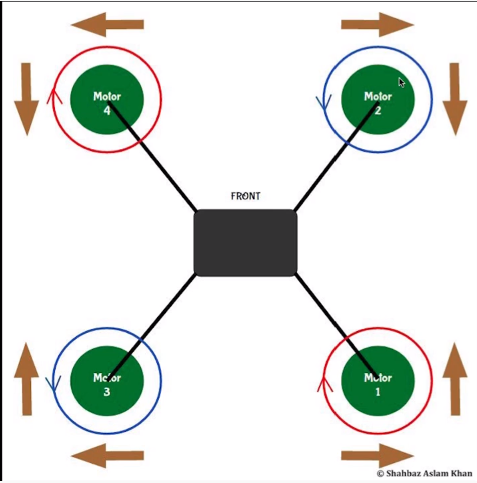 I do not understand that much the principles, so I would like an explanation with this question: What is the formula of the force momentum created by one of quadcopter's motors?

What bothers me in the video is: Why are there only two sides of each motor where there is a force (brown arrows)? There should be four since the torque is applied all around the axis. And if there are four forces on four sides (i.e. infinite forces around the axis), then how is the difference of force (and thus torque) created?

Then how is this torque (on the drone's vertical axis) created by each of the motors?

I hope I've answered your question.

The four propellers basically act as rotating wings and follow the same aeronautic laws, except more complex. They create lift, have to fight the drag and can stall, a grossly simplified version of the complex dynamics of a propeller.

The diagram you have is just to help illustrate the narrative of the clip and is not complete.

Because of the variation of the speed from the center to the tip, the angle of attack is not uniform along the length of the blade, it is twisted and get more flat near the tip.

There are some sites for hobbyist quad-copter makers and there are some free courses on the design of the propellers. If you search for aeronautic courses you will find many, it can get mathematically involved. NASA has a reference here.

Here is the link to a site with simplified but insightful, detailed coverage of torque, thrust, power, with diagrams and charts and easy to follow worked out examples. prop design

The arrows on your diagram are intended as a visualisation aid but, in this instance, you are better off without them.

Torque is (effectively) conserved.
Applying a torque impulse to a body "in free fall" is the rotational equivalent of applying an straight line impulse to a body in free fall and Newton's laws apply - the body will rotate under the effects of the impulse until an equal and opposite torque is applies. This may be via another equal and opposite torque impulse, or via eg aerodynamic drag, or some combination. Be wary of the special case of lithobraking.

In a vacuum (where your propellors don't do much good) the torque imparted to the motor rotor relative to the stator is matched by opposite sense torque in the body. Your motor will rapidly try to self destruct, so lets add some air.
Air accelerated by the propellor will have torque conveyed to it by the rotor, but transfer is not 100% efficient. In a single rotor vehicle (eg classic helicopter) you need to counteract the residual torque and this is usually done with a tail rotor. The long moment arm of the tail rotor reduces the force required.

In a quad rotor machine with two rotors rotating in each 'direction' and at identical power and speed there is zero net torque. Operate one rotor at higher or lower speed and the net torque becomes non zero. For control purposes it is probably better to alter two rotors with the same rotational direction.
Once you have differing clockwise and anticlockwise torques the next difference is applied to the structure as a whole and, just as with the classic helicopter, it must rotate if there is no restoring force to oppose it.

The amount of force has an upper limit but the actual value is indeterminate without additional information. The torque produced by a motor is (to about a 2% approximation)
RPM x torque = power
(torque in kg.m, power in watts).
or torque = power/RPM.
Electrical power input and RPM are known (or knowable) to the flight controller.
However, the electrical power is not fully efficiently converted to air driving power so the available torque at the motor mount will be less than this maximum amount.
A delta reduction or increase in two diagonally opposed propellors will result in some net torque on the aircraft somewhat less than Power1/RPM1 - Power2/RPM2.
(with sign of torque depending on delta power sign and rotation direction)

"A little playing" probably allows the system designers to have a good idea of what will be achieved. As these aircraft invariably have 3D gyroscopes the achieved rotation rate can be monitored.

You are wrong. I said "torque is conserved". You are saying torque is converted to linear motion. On what basis would you think that?

Also, no - not centred on the most powerful (or different motor) - but about the centre of the force couple based on overall forces on the machine and location of the c of g and it's moment of inertia and ... .

Note that I said " ... A delta reduction or increase in two diagonally opposed propellors will result in some net torque on the aircraft somewhat less than Power1/RPM1 - Power2/RPM2. ..." -> Anyone designing the drone to rotate using this system will ALMOST CERTAINLY do it by providing balanced torque change across a diagonal with diagonally opposed two motors - so the rotation will be about the Drone's centre (if CofG and aerodynamic and centre of inertia are all at the same point (as they tend to be (approximately) for a reasonably symmetrical drone.

Even better may be (name motors ABCD around periphery) to Torque UP motors A & C and torque down B & D to get rotating torque overall about the aircraft's centre with the same lift. )

BUT, if you do change the torque on one motor you will get net applied torque and the craft WILL rotate. Exactly where it rotates about depends on the vector sum of the various forces and location of centres of aerodynamic pressure, inertia, ... . BUT trying to work out exactly what it rotates about is an excessive complication - if it is travelling say North at say 20 kph, if it rotates as it flies you would not visually be able to tell WHERE it was rotating about as the rotation velocities would sum with the travelling velocity.

You seem to want to insist that torque causes linear motion and not rotation. You have no good basis for this belief.

Not the answer you're looking for? Browse other questions tagged motors torque or ask your own question.