In a PE (polyethylene) foam factory there have been some incidents with static electricity that have created minor fires. Fire is a concern in such a factory, as PE is highly flammable, and even more as PE foam uses propane or butane gas in its manufacturing process (that's what creates the bubbles in the foam).

The issues we've been having are mostly related to the thinnest of the foams we produce, which is 1 mm thick. It's formed by extrusion into a flat fabric of about 1m width and we form rolls of 350 linear meters. The machine's speed is about 78 meters / minute.

The foam is rolled over cardboard cores in a torque machine (the shaft is chrome-coated steel). The plant is located in a very dry, cold place (humidity is often around 40-60% and temp ranges between 10-28°C).

I've gathered the following observations while analysing this problem:

My hypothesis is that the static buildup is being caused by friction of the foam with the surrounding air, at a rate that is faster than its ability to release it through the shaft (its only contact with ground). 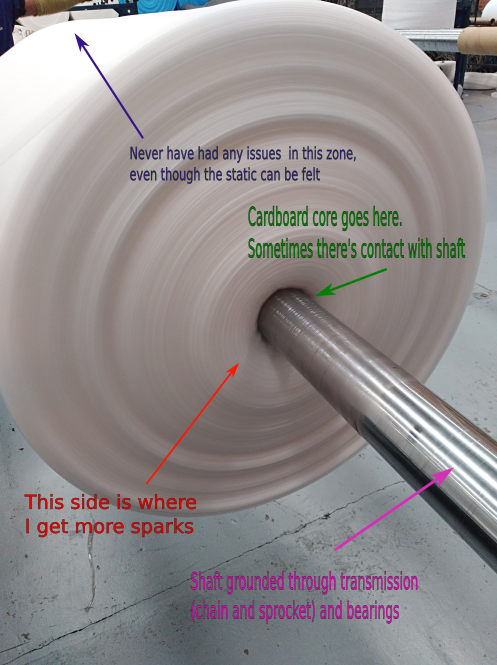 2A. If a watery solution spray is the best solution there is, what makes a good mixture?

2B. Would a metallic side plate in contact with the shaft and the side of the roll be a good, safe solution? If so, what material would you use?

Since asking the question I went to study the subject a little bit more. I want to share my conclusions, hoping that they could be of help to someone else.

Static buildup can't be caused by friction (or contact) between layers of the same material. They don't make a triboelectric pair. Most likely, the static is being generated by the foam slipping in the surrounding air.

This brings us to the second point: try to humidify the air. That could be accomplished by spraying the area, but more technically by installing humidifiers.

In addition to installing the side plate you mentioned (a good conductor, such as copper is the obvious pick, as it doesn't require any mechanical properties), it's a good idea to ensure that the chassis of the rolling machine is properly grounded (as well as those structures in which the material slips).

Not the answer you're looking for? Browse other questions tagged electrical fire polyethylene or ask your own question.

1
Elevator standby + moving passanger , electricity consumption changes
4
Quantifying Static Electricity Hazard with High Explosives
0
Is it illegal to use the hydrodynamic energy contained within the city water supply to generate electricity?
9
How do electric companies supply electricity to homes in countries where energy is privatized?
3
Does electricity go through non-metal materials or not?
0
Magnetising a needle with static electricity using silk cloth