What is the simplest spring system that could produce recoil absorption comparable to that exhibited by the AA-12 assault shotgun?

In this video, the video emphasises the very low recoil level of the AA-12 fully automatic shotgun. In particular, at this point in the video the presenter uses one hand to relatively lightly grip the gun while firing 300 rounds per minute. Note that the presenter does not brace the shotgun against his shoulder.

The image below is a frame from the video at 5m:03 - it shows the gun in"mid burst" - two cartridge cases can be seen in the air, one having just been ejected and the other is closer to the camera. The users 'stance' appears to be intended to show the effortlessness of holding the gun while firing. If he is in fact using typical 12 gauge shells (which he implies that he is), holding a "normal" shotgun like this when firing would result in it being torn from his hands. 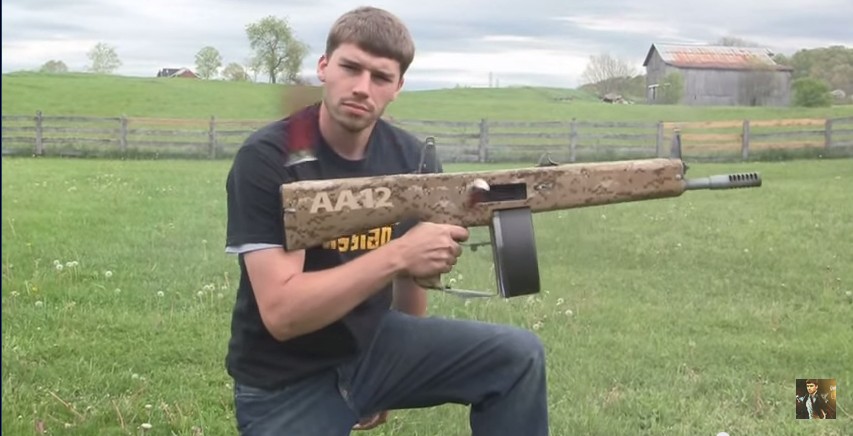 In the video the presenter claims that the shotgun exhibits, for all intents and purposes, zero recoil. He remarks that there is a spring system in the buttstock that counters the momentum of the recoil.

I can think of two ways that the spring system could work:

However, it seems to me that those systems would work only if the user braced the shotgun against something (i.e. his/her shoulder).

What is the simplest spring system that could produce recoil absorption comparable to that exhibited in the video?

The simplest, and possibly only, spring only system that would work like that would be made of nonexisteum as the energy would still have to be dealt with, and the power level exceeds what is seen in the video.

This video TFB provides another firing demo which gives a more realistic impression of the recoil level experienced in practice. The shooters take care to place the butt to their shoulders in a conventional manner, even after having fired a number of shots, and the recoil reaction on this bodies can clearly be seen. While the recoil may be substantially lower, it is nowhere nearly as low as "zero recoil" - and also is much lower than you'd expect from the initially cited video, suggesting that he used very low energy loads.

However, a spring plus 'other things' to spread the energy pulses and absorb as much energy as possible would work - and demonstrably does, as the (US, not Russian) AA12 is an entirely real gun.The original AA-12 was a 1972 US design by Maxwell Atkinson (images). It has since been developed by 'Military Police Systems' into the current version.

When the bolt flies back after firing to cycle another round, around 80% of what would normally be felt as recoil is absorbed by a proprietary gas system. A recoil spring grabs another 10%, leaving the final recoil a remarkable 10% of the normal recoil for a 12-gauge round—so you can point the AA-12 at a target and unload the full magazine without significant loss of accuracy.

Based on the notes below it seems likely that the "proprietary gas system" not only absorbs and stores the energy initially, but must also dissipate energy - presumably by heat transfer via compression. Power level to be dealt with during during firing at full rate of 300 shells/minute is about 150 Watts, or about 600 Joule for a maximum of under 4 seconds for an 18 round drum magazine. 600 Watt.seconds (600 J) is enough to make the gun 'somewhat warm' but low enough to be dealt with realistically.

If the level to be dealt with by the user is 10% of total, as claimed that's a continuous rate of about 15 Watts. That's a level of power input that people would exert for short periods on many hand operated units that take noticeable user power (many not so well known today) - sirens, power generators, window winders ... . Well below the level needed to crank a car by hand (remember those ? :-) ). 12 gauge load energy can vary significantly. Looking at the effort taken in the video I'd guess his loads were not up to maximum power level for 12 gauge.

Overall the user + gun must absorb energy from the explosive charge as they apply an equal and opposite reactive force to the accelerating projectile. The velocity of the overall mass (user + gun) will be low (fortunately) compared to that of the projectile(s). The timing and shape of the reaction can be altered by springs (gas or mechanical) and moving mass but the "reactive energy" must be absorbed either as heat + user absorbtion.

Watching the video portion in question it appears that the gun barrel dips during the period during and after firing rather than rising as I would have expected. This could be achieved by accelerating an internal mass using pre-stored energy (gas, springs, ...) to counterbalance the impulse peak. The energy still needs to be absorbed but with suitable design could be spread across the available time period linearly or in a manner that best suits the users muscle response.

Energy involved varies with load used and can differ by more than 5:1 - so what you see in the video and what you experience with a maximum load can vary considerably. This reference The popular 12 gauge indicates that the upper limit that most recreational shooters can tolerate from a 12 gauge shotgun is 21 foot-pounds of recoil energy*. That translates to about 3 kg.m or slightly under 30 Watt seconds.
That's not as arcane a unit as it sounds because - the 300 rounds/minute firing rate = 5 rounds/second or a continuous power level at 30 W.s per shell of 30 x 5 = 150 Watts. Providing a sustained 150 Watts is a substantial workload. Most users on an exercise bike would be unhappy to maintain that level for more than a few minutes.

*I took the recoil energy, projectile mass and muzzle velocity figures they quoted on that page and compared calculated kinetic energy of the projectile with recoil energy. I had expected them to correlate approximately linearly but the claimed recoil energy increases much more rapidly than I'd expect from the calculated projectile energy. I tried various values of x in 0.5 x m x V^x without getting a reasonable fit. Using impulse (delta mV) is worse. Interesting. Maybe a better understanding of acceleration profile and burn dynamics is needed. Or, no doubt easier, just measure it.

There is a pervasive misconception that recoil can be "absorbed" by such things as springs and proprietary gas systems. This is not true; eventually all the recoil produced by launching the bullet must be absorbed by the shooter. The only thing that a spring/gas system can do is spread the recoil over a longer period of time, so that the force acting on the shooter's body is reduced.

In physics terminology, recoil is analogous to momentum, not energy. Momentum is the integral of force with respect to time, $P=\int{F \cdot dt}$, and momentum is a conserved quantity; i.e. it can't be destroyed. The bullet and escaping propellant gas gain momentum during the launch because they're subjected to a huge force for a very short period of time. As a consequence of Newton's third law of motion, the gun and shooter gain the same amount of momentum as the bullet, but in the opposite direction. To dissipate this momentum, you can either absorb a lot of force in a short period of time, or absorb a lower amount of force over a longer period of time (preferable). For automatic weapons, an ideal recoil system would dissipate the momentum to the shooter in such a way that they would just feel a constant force pushing on them; i.e. no impulses from the shots.

To answer the question, the spring system to do this would be a progressive-rate spring combined with a reactive damper. This type of setup is used on some high-end car suspensions, but I imagine it could be adapted for firearms as well. The trick would be to adjust the reaction of the spring and damper so that they reduce the force exerted on the shooter to a minimum.

Not the answer you're looking for? Browse other questions tagged mechanical-engineering springs firearms or ask your own question.

2
What materials could be used to make a strip that bends when wet?
0
What affects the spring constant or spring life spans?
0
How would I calculate a force on a spring? Or more specifically the weight of an object that spring is supporting
8
What is the name of this particular mechanical linear position switch made of perforated spring strip?
1
Simple cantilever beam deflection - what is the simplest way to add a damper?
4
What is the purpose of dead coils in the middle of a compression spring?