Why do Nescafe's (and others'?) instant coffee jars have an inner seal with no “grip” for easy removal? [closed]

Ask Question
Asked 1 year, 2 months ago
Active 1 month ago
Viewed 658 times
-2
$\begingroup$
Closed. This question is opinion-based. It is not currently accepting answers.

For a number of years now, I have been buying instant coffee products. Since the main brand has been Nescafe, this question is specifically about their products, even though I vaguely recall that the other brands also did this same thing. (I can't swear on it, though.)

When you buy a jar of "Nescafe Gold", for example, and unscrew the top, you are met with a thin but firm protection layer, obviously intended to increase the shelf life for the product. However, there isn't any part of this which allows human fingers to pull this protection layer up easily, in one go. In fact, every single time I open a new bottle, I'm scared to get little pieces of that protection layer into the actual instant coffee, since the only way I have found to actually unseal it reasonably safely is to take a tea spoon and carefully knock a hole in the middle and then start pulling away the pieces, hoping that it doesn't make a mess.

It always makes a mess.

There seriously doesn't seem to be any way to open it in a "sane" and "obvious" way. I'm absolutely baffled by how this can be, and I've been trying to imagine scenarios in my head where they sat in a board room somewhere and decided to design it this way (and keep it for a very long time) in spite of the problems and frustrations and intangible badwill it would produce. Not to mention that they probably use the product themselves.

I've tried numerous alternate ways to open it, including cutting along the edges, but nothing is efficient and safe, as one would expect from such a popular and well-funded instant coffee product. It almost seems like they want you to open as few packages as possible, which is the opposite of their best business interest...

Does anyone have any facts about this?

EDIT: It seems like the responses so far don't understand what I'm asking at all. I'm simply wondering why they don't have a little extra bit of the exact same material as they are currently using "overflowing", for a human to be able to "grab on" to something and thus open the seal without making a mess. Why require each customer to fiddle around with knives and stuff? With so many things having been simplified to an extreme degree in recent decades, why is this particular product still using what seems to be the "version 1.0" of vacuum sealers? You would still see if somebody has been tampering with it. It would just be much easier to actually open.

Maybe this is actually what they design it for: to show immediately if someone tampered with the seal.

Big brands have to be prepared for acts of arson, sabotage, lunacy, sick people seeking pleasure out of hurting strangers, disgruntled employees, etc.

In addition to maintaining freshness of production and needing to provide security against tampering for consumer safety, one of the reasons for using that particular type of seal is the company has done so for a very long time and it is cheap way to seal a jar.

Until they are required to do something different either because of regulations or consumer protests, in large numbers, there is no incentive for the company to change.

I know of some vitamin containers that have an easily removable seal that has a tab to enable the seal to be easily pulled off. The containers are made from plastic not glass. I have also seen other types of coffee, packaged in glass jars that use a similar system as the vitamin container.

Unless you can find a brand of coffee that provides an easy and "safe", by your measures, way to unseal the jar try running a sharp pointed knife blade around the edge of the jar when first opening the seal.

Regarding why there is no pull tab, this is most likely due to them employing a seal and strip operation. 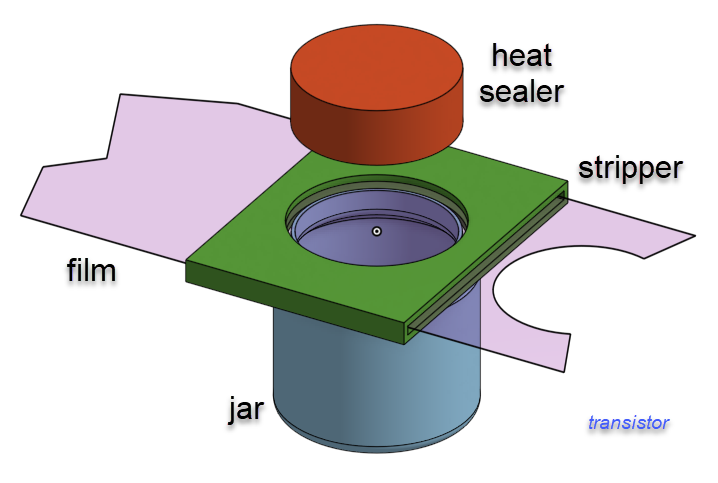 Note that there is no option in this arrangement to cut a peel tab as no knives are employed.

There are ways to work around the problem but investment in equipment and lack of complaints may provide enough inertia not to do anything.

Not the answer you're looking for? Browse other questions tagged vacuum product-engineering seals or ask your own question.

3
How to prevent static buildup in an electric burr mill coffee grinder?