When analysing and designing a structure for the serviceability limit state the deflections of each beam must be found. When considering a multistory rigid jointed structure (as below) and applying first-order elastic analysis, what method must be applied in order to find the magnitude of the maximum lateral displacements on each beam (e.g. $\delta$ on the deflected shape)?

Essentially my question is, how do I find the value of $\delta$ on beam BE from the deflected structure.

Am I correct in idealising the beam as the simply supported beam with the correct concentrated moments on either side (acting as fixed support). 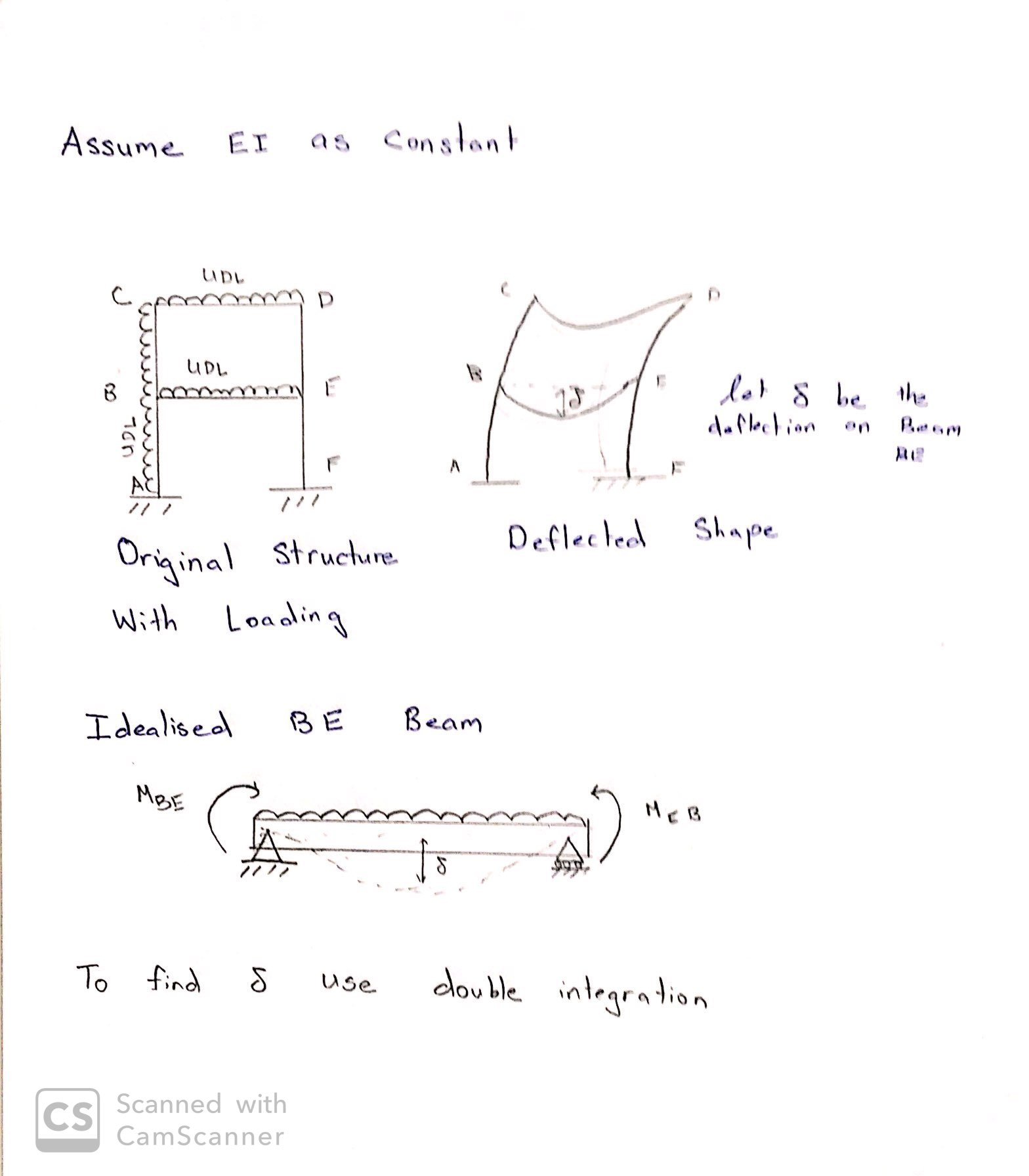 From a straightforward, academic perspective (by which I mean disconsidering seismic and other code-enforced conditions), your approach is either exactly or roughly correct (depending on your definition, as described below).

Obviously, you must first calculate the entire structure and determine all the internal forces. As you've stated, that will include both the loads directly applied to BE but also any nodal loads transmitted to BE from the columns. This will give allow you to make a perfectly accurate representation of the internal forces on the beam and therefore of the deflections it faces "in isolation".

However, what your analysis is currently missing is that the beam actually isn't in isolation. It belongs to a larger structure which is also deforming, and this deformation also applies what can be effectively considered an imposed displacement to the nodes.

In this particular case, both nodes of BE will be moved to the right, while the left-most node will also move up and the right-most node, down. This means that BE's "straight line representation" in the deformed configuration is actually slanted.

And so it becomes a matter of definitions and possibly codes. What is the deflection to be considered when checking the servicibility limit state?

I'm Brazilian and therefore follow code NBR 6118 for concrete structures and NBR 8800 for steel structures. Both of these1 are unclear as to which deflection to use, stating only that elements should be "analysed as isolated, simply-supported beams under loading"2. I interpret this as allowing your method of disconsidering imposed deflections, but it's not air-tight (imposed deflection could be considered a load, but they do use the word "isolated"...).

Another interpretation is to consider the relative displacement of the nodes: both nodes drop by some amount, but that cancels out, so the only thing that might increase users' unease (the basis for SLS) is the additional deflection of one of the nodes.

Or you might want to consider the total deflection of both nodes: after all, if your columns are very "compressible", your users might become uncomfortable if high variable loading causes the ceiling to drop by half a meter.

That depends on your relevant code (and possibly how you interpret it). If you need to consider these imposed deflections, then you're basically forced to use the stiffness matrix method: you can certainly do it by hand, but it'll just give you a headache.

See below the model I used to look at this problem, and the three ways you can interpret the deflection of BE: 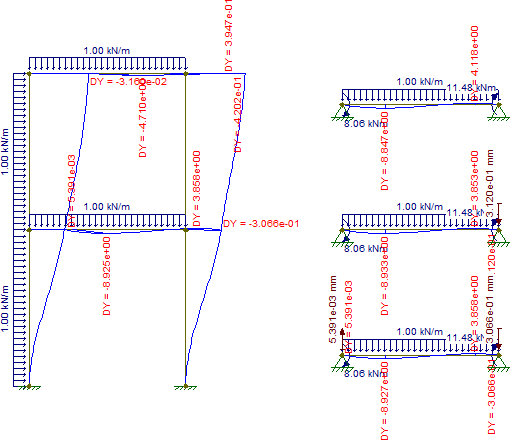 1 and therefore the Eurocode as well, since they're the inspiration for the Brazilian codes

2 That's my own literal translation from the Portuguese.

In US, The American Society of Civil Engineers (ASCE) Structural Engineering Institute (SEI) publishes Minimum Design Loads for Buildings and Other Structures (ASCE/SEI 7-10).

You can download the book for free from the State of California, just search for ASCE 7-10 download from CA gov.

Not the answer you're looking for? Browse other questions tagged structural-engineering structural-analysis deflection or ask your own question.

4
Accidental Torsion and Equivalent Static Load for an irregular structure
5
Can the thickness of a guard post be derived purely from energy principles?
3
Definition of stiffness for structural dynamics: How would you find the stiffness of an unusual beam directly?
0
Deflections Of Statically Indeterminate Structures
3
I seem to have a fundamental misunderstanding about the double integration method for calculating beam deflection
0
Reaction forces on a three support continuous beam with two of them requiring compatibility equations. Superposition method done wrong!
0
Contradicting Results of a Truss Structure