What is meant by "perfect geometry" in the context of Euler buckling?

In this question for example (in the first answer) it is said that the Euler critical load formula is unrealistic, because it assumes perfect geometry and perfect alignment of the load. I've found similar statements from other sources as well. What is meant by these? I've seen some derivation of the Euler buckling formula, but there is no mention of the assumption of "perfect geometry" or that the load needs to be "perfect aligned". The Euler buckling formula seems to follow quite directly from Euler beam theory. So could somebody clarify a bit what do these assumptions mean? Thank you!

It means exactly what it says. The geometric tolerances in the beam are exactly zero. The material is perfectly isotropic and homogeneous. The end load is distributed across the surface of the end of the beam in a way which is perfectly consistent the Euler beam theory and does not produce any local stress concentrations at the end. Etc, etc...

These "perfect" assumptions are no different to what is made in most simple structural analysis, and often they are not very important. In fact St Venant's principle was originally an empirical statement that "these details usually don't matter", though it was later made mathematically rigorous.

For example, if you apply a gradually increasing load to a slightly curved beam, it will "bow" outwards in one preferred direction. Even if the material is stiff and the length of the beam measured around the curve remains almost constant, the straight-line distance between the ends will change as the curvature increases, and therefore the applied load is doing work before buckling takes place, which is ignored by the Euler theory.

Of course it is possible to formulate a theory of buckling which includes this type of effect, but it is not very useful in practice because the size of the effects is unknown in a real world situation. For example, even if a beam was manufactured close to "perfectly straight", it may be bent and/or twisted into a different (unknown) shape when it is assembled into the rest of the structure.

In Euler's buckling formula the bifurcation to the left or right buckling is symmetrical and will lead to a stable post-buckling curve in the column.

But an eccentric loading or a defect in material, even though can be solved analytically, in many cases the buckling favors one side and the curve may not be stable.

Here is the diagram of some variety of buckling compared to Euler's.

from the book Exact Solutions for Buckling of Structural Members By C.M. Wang, C.Y. Wang. . 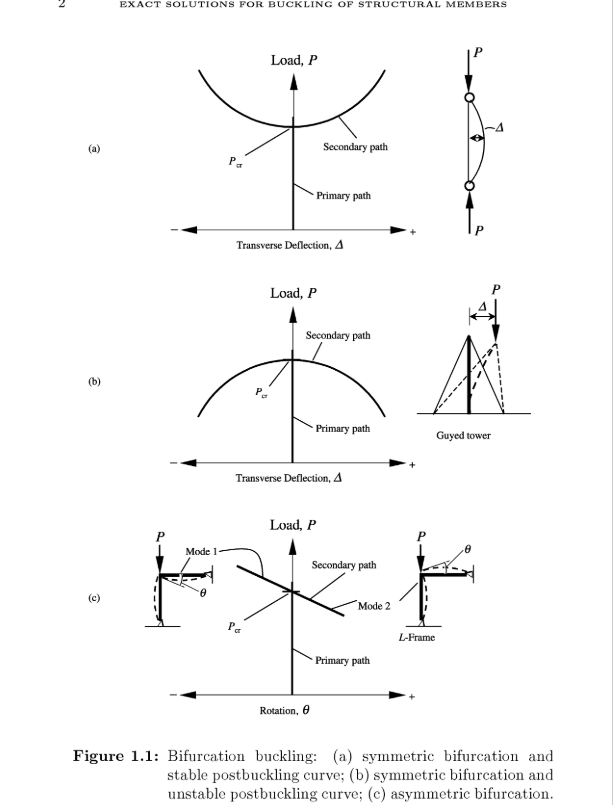 Not the answer you're looking for? Browse other questions tagged structural-engineering buckling or ask your own question.

2
Buckling vs. Yielding Failure of Columns