Is there a way to auto-reverse cassette tape with gears only?

From what I read, tape decks auto-reverse by having a sensor keep track of an encoder. When the take up pulley stops turning, the logic board reverses the direction of the motor (and does some other stuff to pickup different tracks on the tape).

In my art project the rotating reels are the only necesseary parts, and the exact speed of the tape doesn't matter. All I want to do, is rotate one reel and then move the input gear to the other reel when the tape has run out on one side. It just needs to rotate forever.

I assume it would be somewhat similar to this mechanism: 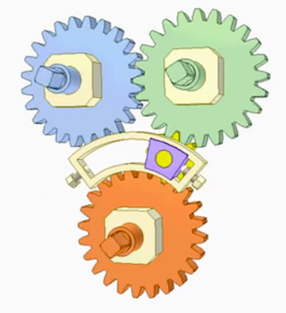 I would like to use as few parts as possible, and no electronics (except for the small motor that drives the mechanism). Is this at all possible?

I have not yet seen the perfect solution, but I did find this cassette tape adapter: 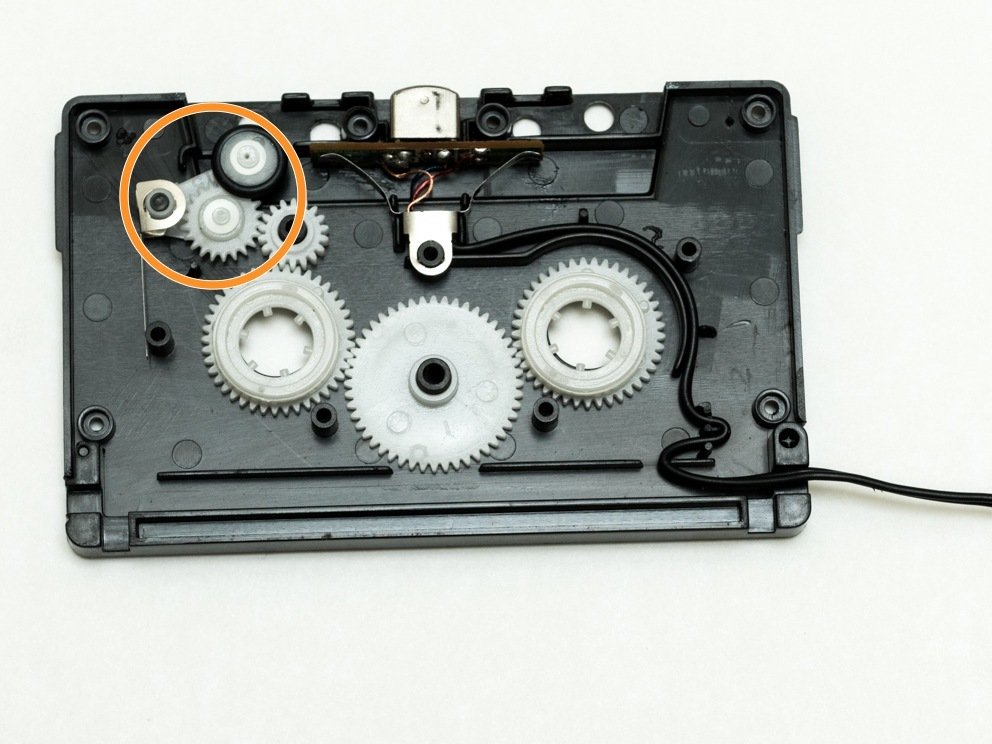 From the Wiki page on this type of adapter:

To simulate tape movement, a system of gears or a drive belt connects the tape player's drive motor (via the take-up spindle) to a wheel inside the adapter. This wheel rides against the detection wheel to simulate tape movement. Because the wheel never stops spinning, the deck never senses an end-of-tape and never tries to reverse the tape.

I think my solution would look similar to the inside of that adapter, but then stuck to the back of a normal cassette. It will provide the drive motor, also rotate the spindles that the reels are on.

What I'm looking for is a gear mechanism that will 'walk' to the reverse gear when the first gear stops turning (like in the image above). Does that make sense to anyone?

You could have the orange and green gears permanently in mesh mounted on a plate.

Then if you rotate that plate then the orange gear become un-meshed from the blue gear and the green gear comes into mesh - this will reverse the direction of the orange gear. The rotation may be achieved by a small solenoid...

Turning the motor off then on may also be good.

8
How can I get a stepper motor to engage with a freely spinning wheel?
2
How do you calculate the best gear reduction for max speed?
6
What is the use of gears in a device with a fixed gear ratio?
5
How to transfer rotational energy into lateral energy only when rotating one way?
2
Why do small gears used to turn big gears allow more force with less effort?
3
Reverse-engineering spur gears - do I have enough data to make a gear that will mesh correctly?
2
Trouble with Base circle and meshing with spur gears
1
Is there a cheap way to get gears
1
Gears with tilting shafts