The building is the following: 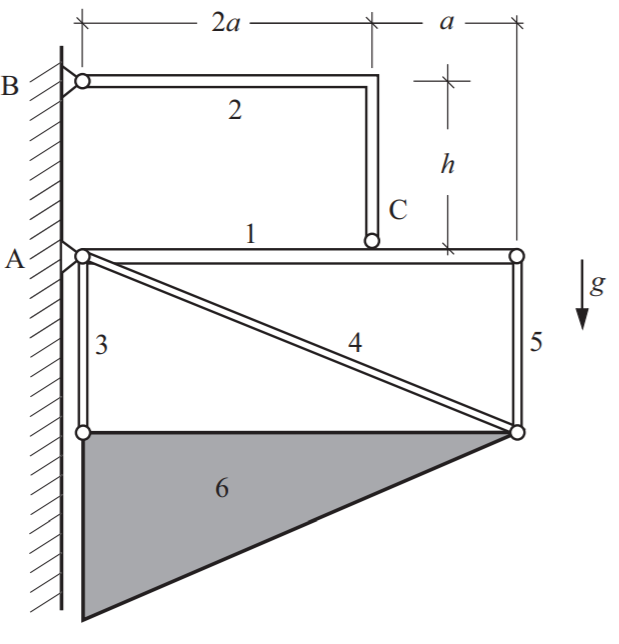 Now my problem is drawing the free body diagram for the component 6. I got the following:

However the first equation would result in the force $4=0$, which doesn't really make any sense for me. If I think about it I would say, that rod 4 should take some force and make the building stronger...

Can you tell me, wehere my problem is? :) Thanks

Your result is correct: member 4 is what's known as a zero-force member.

If it did, that would mean the node is unstable, with a net horizontal force. And, by Newton's laws of motion, where there's a force, there's an acceleration. So if rod 4 had any internal force, it'd mean this isn't a structure but a mechanism.

One escape would be if we can assume the disk 6 can take a structural load. In such a case, rod 4 would be under tension, generating a leftward force which would be resisted by disk 6's compression. But we can't make that assumption since we don't know anything about disk 6. It could well be made of lead: very heavy, but very weak.

By the by, the Wikipedia page above is worth a read, since it describes how zero-force members aren't actually useless in the real world:

Reasons for Zero-force members in a truss system

These members contribute to the stability of the structure, by providing buckling prevention for long slender members under compressive forces

And pro-tip, don't use numbers to describe the forces from rods (for instance, writing $4 = 0$ to describe your conclusion about the forces in rod 4). It'll just get you confused between what's a rod and what's a multiplication constant. Instead, use $F_4 = 0$ or something of the sort. Never use numbers for variables; always use letters (Latin or Greek) with optional subscripts.