Rocket vs aeroplane? Difference in take off?

Although both aeroplane and rocket burn fule and eject smoke but Why aeroplane moves and runs horizontally before take off ?why does not it takes off at its original/initial place just like rocket?

A plane relies on aerodynamic lift to stay airborn. This is much more efficient than using raw vertical thrust like a rocket does. The downside is that planes always need to be moving perpendicular to the direction of gravity.

Pretty much all planes except for fighter jets do not have enough thrust to take off vertically.

For traveling from point A to B on land that's fine, since the path is perpendicular to gravity anyway. If you wanted to go straight up though, a plane would be forced to fly in a large spiral.

So the short answer is: Planes take off horizontally because they have to. Rockets can take off in any direction, but they're not efficient.

Vertical-takeoff aircraft do exist. A lot of research has gone into this (mainly in the 1960s), but it all led to one conclusion: there's no commercial case for vertical-takeoff jet aircraft.

Only 4 VTOL (vertical takeoff and landing) aircraft have gone into production: the Harrier, the F-35 (B version only), the V-22 Osprey and the Yak-38. These are all military aircraft created for a specific niche: the need to operate from small bases either on land or on a ship.

This is an example of a civilian VTOL design: 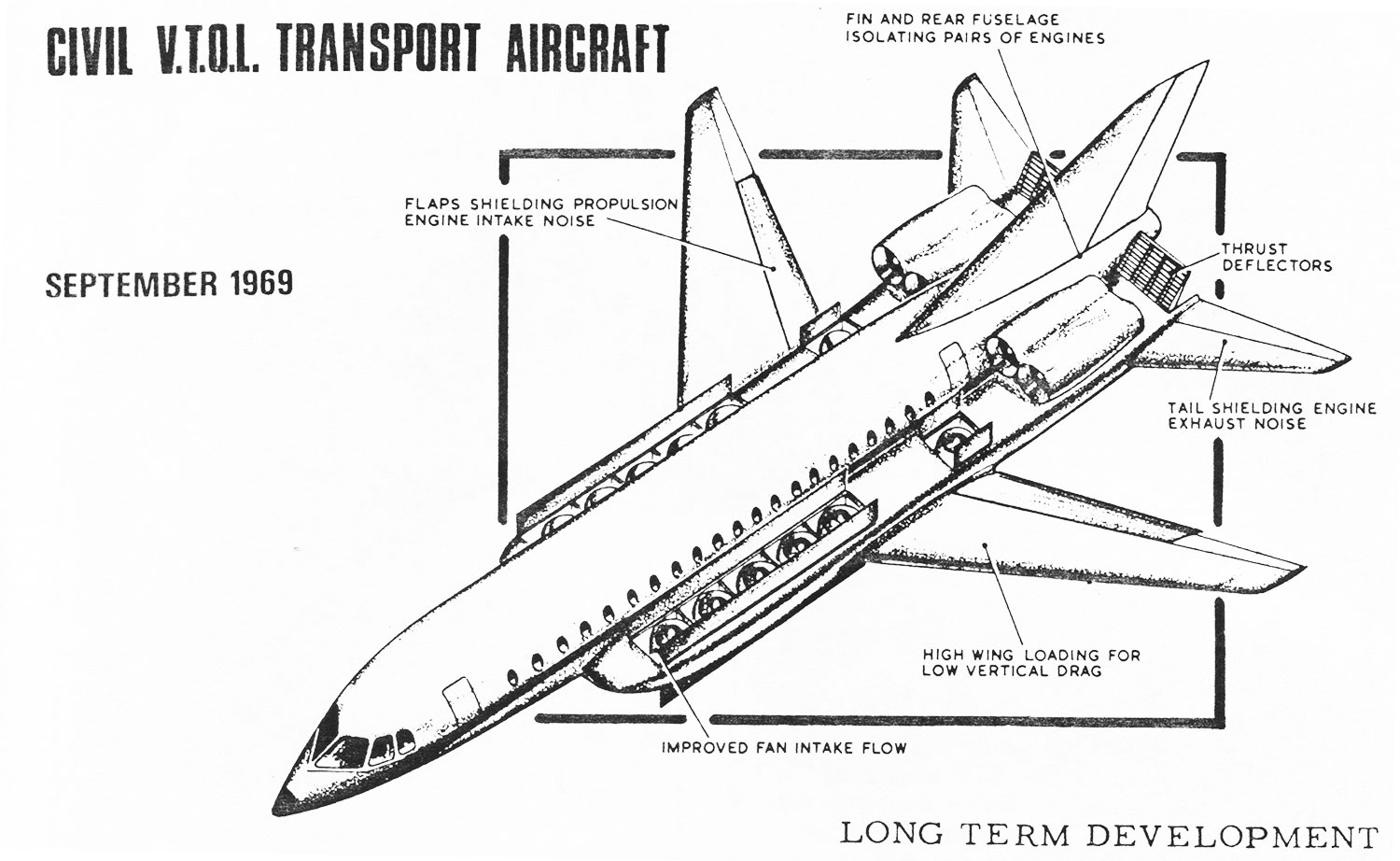 as you can see, there's a massive increase in the number of engines compared to a normal airliner. All of these engines are used for only a few minutes per flight, they are dead weight and drag the rest of the time, making operation of a VTOL airliner much more expensive than a conventional aircraft.

VTOL operation is also very loud, so the only advantage of a VTOL aircraft (doesn't need a large airfield so it could land closer to its destination city) falls foul of noise regulations.

Rockets are the other way round: they need massive thrust to get up to the speed required for orbit. This also turns out to be enough thrust to take off vertically.

A rocket only spends a few minutes inside the atmosphere. So while it is possible to add wings to a rocket to take off horizontally, those wings would be dead weight for most of the flight. Rockets operate close to the edge of what's physically possible, and dead weight is the last thing you want.

Rockets are carrying their own oxygen. Airplanes rely on the oxygen in the atmosphere.

Also as has been mentioned in @drew's answer airplane engines have been optimized for flying in the atmosphere with continuous power on but very small relative thrust, a range of between 20% to 30% of the weight of the airplane. While rockets must provide 100+% thrust for the lift off.

There are new technologies that are breaking this mold like solar wind rockets or vertical take off planes with rotating wings or military jets which have hovering capabilities.

But the two major differences in majority of the cases is rockets do not need air either for developing lift or for oxygen, while planes need air to generate lift and use it's oxygen to burn their fuel.

Not the answer you're looking for? Browse other questions tagged aerospace-engineering aerodynamics rocketry or ask your own question.

0
Rocket to slow freefall
2
What filter is this?
6
Does every engineering design needs to have a complete theoretical backing or may experimental data suffice?
5
I have a problem with my representation of roll in Simulink
2
How do those "dipole-shaped" weights attached to sections of electrical power lines work?