Limitations on the control effort

But I don't understand why. Also, does the controller bandwidth impose some limitations? Can please someone explain this to me? Thanks in advance.

[EDIT] I recognize that my question was to shallow, so I will try to do more reasonings and add more argumentations as I search for answers.

I will use an approch based on the mixed sensitivity for my discussion.

Suppose I have the following plant and controller:

Now I define the following mixed sensitivity controller, where I used a weight for the sensitivity in order to achieve my desired specifications, which are a 60 dB attenuation at high frequency, a cross over frequency of 0.66353 and a maximum resonance peak of 2 dB. I also inroduce a weight for the control effort, which I use to limit the amount of effort the control has to do. In particular, I use a constant weight, so by doing so I am hopefully trying to limit the control effort to increase too much:

some of the comments may not make sense because they refer to some previous code.

Now, I define the control effort: 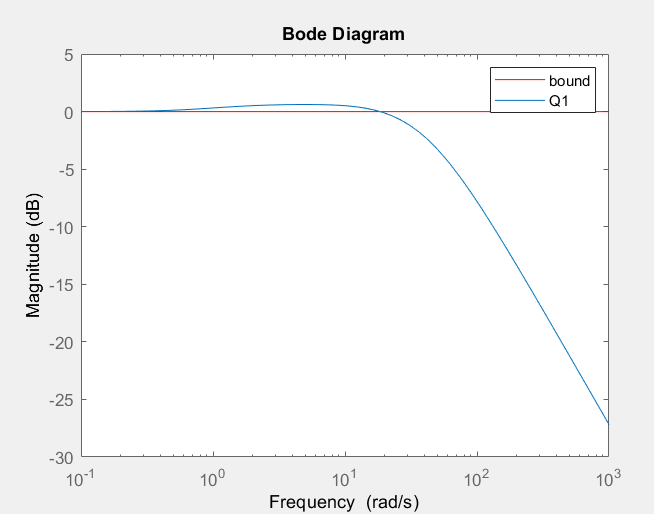 in this case I used a control effort weight equal to 1, but probably an higher value would have been better.

Now, the bandwith of the controller is 0.9879, so if I go above it the control effor shoulb be increasing instead of decreasing. Let's try:

I define a second sensitivity weight which gives an higher cross over frequency to the control effort when defining the controller:

and if I plot the control effort of it and confron it with the previous result: 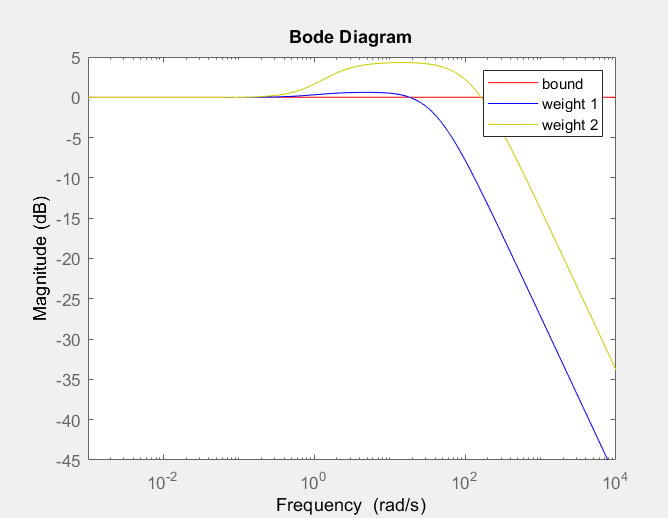 Now, I am not sure I am going to the right direction, but hopefully I am getting closer.

Can someone help me? Thanks again.

I'm not getting your comment about the sensitivity bandwidth being linked to control effort -- there's more to it than that, because sensitivity is at least in part a function of the plant itself.

Also, does the controller bandwidth impose some limitations?

Not in theory-land. There's an implicit assumption that you're going to define a controller of arbitrary bandwidth, then give it to some poor slob (possibly me) to implement; and that your job is then done. While real-world designs sometimes do feature drivers or sensors of limited bandwidth, it's more common that there are real-world limitations on how hard you can push the physical devices (or how much you can ask of power supplies); that limits the available control effort.

7
Unexpected Results from my Transfer Function
5
How to compare dynamic systems of different degree of abstraction?
4
what's wrong with this robust control scheme?
1
Doubt on zero pole cancellation
2
analysis of PD controller vs static-gain
0
What are the drawbacks of inceasing the bandwidth of the system?
0
Why prefer a discrete-time system because of a practical implementation instead of continuous one