Effect of bypass valve on flow rate and pressure

I have no background in thermodynamics or fluid dynamics, so please bear with me. Refer to the following figure: 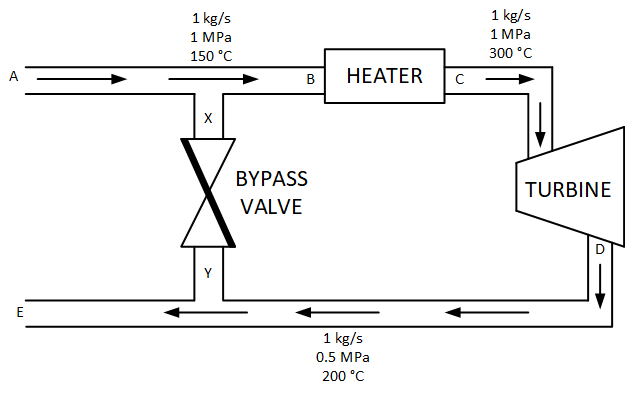 A working fluid with a flow rate of $1~kg/s$ enters a heater at a pressure of $1~MPa$ and temperature $150~^\circ C$, which raises its temperatures to $300~^\circ C$. It then enters a turbine, does work, loses pressure and temperature, and exits at $0.5~MPa$ and $200~^\circ C$ at the same flow rate. The bypass valve's purpose is to control the work output of the turbine by bypassing some of the working fluid from the inlet stream directly to the outlet stream. Suppose that we're free to make all the "simplifying assumptions" for this problem. Suppose also that initially the opening fraction of the bypass valve is $0\%$ i.e., the valve is fully closed. My questions are:

Some questions might seem redundant, but I listed them to get a thorough response, for clarity and understanding. Also, all the numbers are arbitrary and any unreported quantities could be assumed. Thank you.

I'll not get too deep, because my hidraulics basis is truly shallow.

Your by-pass valve will control the flow (from 0% to 100%). Like on eletrical sistem the fluid will take the easiest path everytime.

Yes, there will be a pressure change at E, but this is affected more because of the flow from Y, and not because of the pressure. Btw. The flow at E will be exactly the same unless your sistem lose/gain external flow from another point or from a pump.

The flow rate will be linearly related at point B (not considering the termal effects). But the pressure will remain the same.

I'm not so sure what you want with this question. By my understanding, you're asquing what is the simplest connection method to get a linear response in your turbine.
And my sincere answer in this case will be, "I don't know". In my understanding the point you've chosen is the best point (no personal experience, so take with a grain of salt).

Not the answer you're looking for? Browse other questions tagged fluid-mechanics thermodynamics or ask your own question.

3
Temperature when steam expands into a vacuum
4
Determining mass flow rate and exit velocity of compressible flow
3
Working out pressure drop from leak rate
1
Steady state approximation for compressible fluid flow (manifolds and other pressure vessels)
0
How to maintain a static negative pressure in a valve?
0
What should be the density of a compressed gas while measuring the flow rate using Rotameter?
2
Do pressure regulators restrict the mass flow rate?
0
Open pipe and relation between pressure and flow rate
1
Angular Velocity And Flow Rate Relationship Of Turbine