So, I did a quick search around and didn't seem to find anything regarding this, so I thought perhaps I should just ask a question.

Metals are malleable and will generally flow/deform if you roll it repeatedly. Localized concentrated loads will thus change the shape of a piece of metal bit-by-bit if exposed to repeated loading of the same/similar orientations (kind of like molding a piece of playdoh, with each repeated load only displacing a very minor amount of material). Presumably, flow should be the same in all directions of the contact point non-isotropically for a homogeneous material.

But if there is eccentricity within the load, will that still hold true? If it does not, where is that critical limit for for X:B within the figure below that will produce some degree of eccentricity with the amount of metallic flow? Or am I thinking about this in a completely wrong way? See below example for what X and B refers to, and an example of what I am trying to figure out. Thanks!

Edit: I know flow will happen. What I am trying to understand is if load is eccentric, how will that affect flow behavior? Will it cause one side to flow more than the other IN THE ABSENCE of surface shear type loads? The below example will have all vertical loads (up/down) with assumed 0 lateral loads (left/right), and if you are just rolling it back and forth, will it flow more on the side closer to the edge just because it is closer to the edge? I don't think there are any formal theories but I can see it happening that way because flow ultimately is a localized plastic deformation that is constrained by surrounding material structure. If the surrounding material structure weakens, it somewhat makes sense that it will tend to have more plastic deformation in that direction. But is there some limit as to how far X has to be from the edge for it to be negligible? It's kind of like us saying eccentric loading on a concrete shallow foundation footing is okay if it is within the middle third. Hope that makes more sense what I am asking. 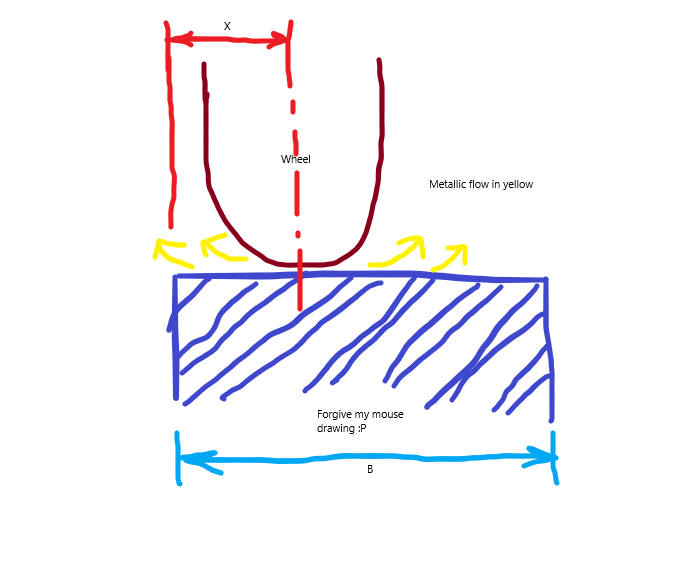 Yes, it is still going to reshape and damage the wheel and the support. Maybe an example of unsymmetrical loading is a train wheel in relation to the tracks.

There has been extensive research and tests on that, to help the design the wheels and rails to lower the routine maintenance costs.

This is a brief but useful research on the railroad wheel.

Not the answer you're looking for? Browse other questions tagged materials metals material-science or ask your own question.

6
Finding the pull-through capacity of a nutted bolt and washer in ASA plastic
15
Why do we even use engineering stress?
6
Does the ultimate tensile strength of a material have a physical meaning?
0
Material Properties of ABS
1
Find spring constant of frame structure
1
How can I compute the thickness of a pole of a given material that is needed to carry a given load?
2
The Bauschinger effect
0
What's the best material to use for my project
2
How does a pressure vessel fail when the interal pressure exceeds the yield stress of the material?
0
Polypropylene material characterization