What type of exhaust is vented from the rooftop of this apartment?

I recently signed a lease for a high-rise an apartment unit that directly overlooks the rooftop of lower floors. That is, my apartment is on a smaller floor plate than the units below it, and I could theoretically open the window and walk out onto the roof of the lower floors. Unfortunately, I don't have any pictures.

The roof has several small vents that look like this: 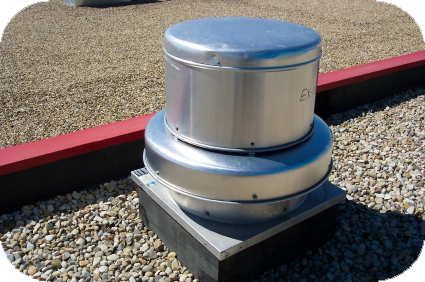 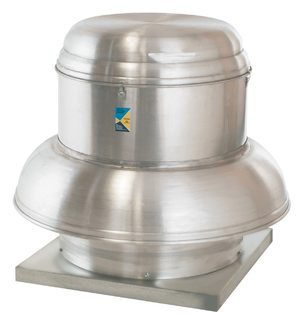 I can't remember what kinds of pipes I saw, if any.

Do I have to worry about the air coming from the roof vents? Would there be any bathroom/sewage ventilation on a rooftop like this?

Modern waste vents are usually bare plastic pipes extending a short distance up through the roof, with no cap. Compare the vents in this image: 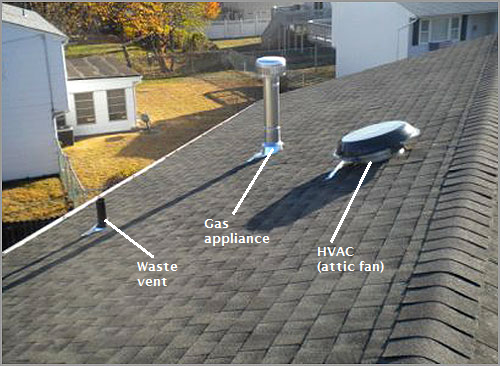 Judging by the apparent age of the neighborhood, the waste vent on the left is probably nothing more than a stub of ABS pipe. PVC (white) is also sometimes used. Older homes can have metal (copper, cast iron) or even clay vent pipes, but they're no more complex, just a different material. These pipes drop straight down into your drain system, so there's no harm done by rainwater or small debris falling into the vent.

On the other hand, vents for appliances are designed specifically to protect the system from any ingress of water, dirt, debris, small animals, and so on. They're also usually attached to larger-diameter ducts, as opposed to smaller-diameter vent pipes, because they need to allow for more airflow. Sewer ventilation is very low-flow, it's just preventing the gradual buildup of gases produced through natural processes, so it doesn't need a large pipe.

The vent in the middle is larger than the waste vent because a furnace or boiler puts out combustion byproducts at a much higher rate than decomposition produces sewer gas. You can see that the attic fan on the right has the largest duct by far, and that makes sense because it's attached to a system that's designed specifically to move large volumes of air through the home.

There are also reasons to be particular about how you vent appliances, since this can impact how well they operate, home energy efficiency, etc. There's no reason to be particular about how your sewer pipes are vented, as long as the sewer gas can't flow back into the home, which is achieved easily with traps in the system, far from the vents. All that's needed at the vent end is a simple, inexpensive, unobtrusive pipe stub and a good seal with the roof.

The photos are of exhaust fans. They may be exhausting restrooms, or could be drawing from other spaces, such as janitor closets, storerooms, etc. The exhaust from these fans may have excessive moisture and/or odors (restrooms), or could contain dilute cleaning chemical fumes (janitor closets).

They are not venting the sanitary waste piping. Plumbing vents will look like open pipes stubbed up through the roof. Those connect to the sanitary sewer and can vent harmful gases (such as hydrogen sulfide)- they are required by the Uniform Plumbing Code and the International Plumbing Code to be located at least 10 feet horizontally from air intakes, doors, and windows (or 3 feet above).

Found an answer in the plumbing code:

Not the answer you're looking for? Browse other questions tagged hvac building-design drain-waste-vent or ask your own question.

3
Translating the name of a type of beam from Russian to English
1
Why does removal of ventilation of a sewage pipe lead to backflow from the toilet?
1
What is the strongest way to fasten 8020 extrusions in this arrangement?
1
Do spiders *actually* get into a house through the sewer/water pipes?
1
What is this sticky outy bit called?
0
What is the purpose of these "safety" ledges on this Asian skyscraper?