How do Test Indicator Flexible Holders hold rigidly when tightened?

If one were to search on Amazon for "Test Indicator Flexible Holders" you will turn up many items using this mechanism (please ignore the magnetic base; I'm not focusing on that part, just the red components and the knob): 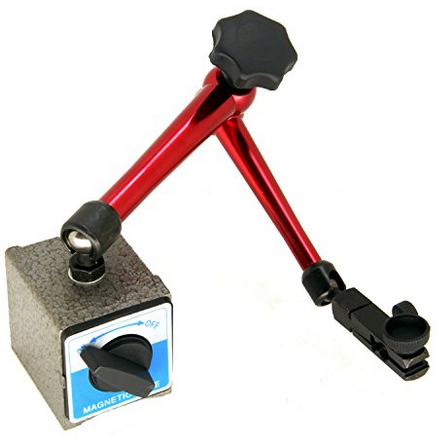 You can watch this video to see how they work:

It is clear from that video that, indeed, that single knob tightens down both (ball?) joints, both the joint mounted to the top of the magnetic base, but also the joint closest to the holder that is intended to hold the oscilloscope probe.

How does the central lock mechanism in articulated arm (magic arm) works? provides the answer to #1 for how the mechanism works. And, due to now being able to search online for the right terminology (see #2 below), I also found a YouTube video that does a teardown of a "Articulating Arm" works at 100 seconds into the video.

For #2, I could not find a standard name for the mechanism, so I list several below (and it turns out that these are apparently not all the same mechanism).

Apparently, a "Variable Friction Arm" is not the same as a "Magic Arm", according to a YouTube video at 48 seconds in:

00:48 Now, strictly speaking, what you see here is a variable friction arm, not a magic arm. Magic Arms tighten and loosen by swinging around a big ratchet. The problem is they tend to break quicker than the more sturdy knobs, so I prefer these versions. Don't worry though everyone calls the magic arms.

And, from The Bogen Articulated Arm and Super Clamp article we have a good explanation of the differences:

While I've just described all three Arms, my recommendation for newcomers is the least expensive of the three, the Articulated Arm. In this model, there are three different controlling levers for controlling the movement of the wrist, elbow, and shoulder joints. While that may seem cumbersome compared to the one locking lever of the Magic Arm, or the variable friction knob of the Variable Friction Magic Arm, and it is a bit slower to use, those disadvantages are offset by the control you have. With either of the other two, you must have the Arm's position set exactly where you want it when you lock it into place. If an adjustment needs to be done, the lock must be loosened and the fine-tuning done, at the risk of the other joints going out of place. With the Articulated Arm, if I need to raise the flash a bit all I need do is loosen one joint -- perhaps the elbow, perhaps the wrist -- and move the flash into place. After doing so, I might find I'm still 'off' by a bit, and I might loosen another joint, maybe the shoulder this time, and do my fine-tuning. While this takes longer than doing the adjustment by loosening an Arm with just one knob, I think you can see that this also allows very precise and methodical adjustment changes.

If anyone has any information on any standardized name, that would be helpful, but at least I have names I can search for in order to source them from multiple suppliers:

Not the answer you're looking for? Browse other questions tagged mechanical-engineering mechanisms terminology or ask your own question.

4
How does the central lock mechanism in articulated arm (magic arm) works?

4
Selectively rotating (engaging/disengaging) one of 80 couplings on a small shaft?
4
How does a flexible endoscope turn?
0
Instron Test Profile -- Failure when steadily dropping the load
3
How to test Cross Wire Welds
2
Ackerman steering
16
How do bike wheels keep turning when the rider stops pedalling?