Why are parts of a cylinder closer to centre elongated less during torsion?

Say we have a fixed cylinder with a radius of $R$. Looking at any cross-section, the shear stress at a radius ($r$) is given by $\tau = G \gamma $.

To make it more clear:

Picture a large circle being twisted due to a shear force $F$. Why is it that a circle with a smaller radius will twist less due to the same shear force $F$? What is the reason behind this?

Second, consider your statement "why it is that the outer radius particles twist more than the inner in the first place if the same force is applied at all radiuses". Why do you believe this to be true? Can it be true in an isotropic material?

In fact the twist angle is assumed to be constant from the center of the cylinder out to its circumference. If we call the twist caused strain at any distance r from the center $ds, \ then\ \theta= \frac{ds}{r} \quad and \ ds=\theta*r$

Looking at your final question, it's important to make sure one thing is clear: a bigger cross-section (i.e. cylinder) will always twist less than a smaller one.

As for why the outermost fibers deform more than the inner ones, there are a few ways to think about it:

If I understood correctly the question is "why it is that the outer radius particles twist more than the inner in the first place if the same force is applied at all radiuses."

(As kamran said), for a given crosssection they do not twist more. The twist angle is the same. What is different is how much the layer travels given a radius $r$

Imagine if the the solid beam is constructed by thin walled cylinders. One inside the other and they are bonded. If you hold the inner cylinder and try to rotate the outer then what will happen is that the shear forces between each layer will cause the layers in between to move. Each layer will sweep along the adjacent layer. 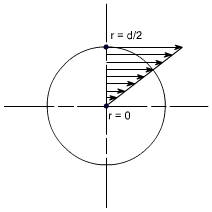 So a way to think about it is the following:

Not the answer you're looking for? Browse other questions tagged structural-engineering civil-engineering statics or ask your own question.

3
Is the Qmax of an T-Beam equal if calculated both above and below the neutral plane?
5
Logic behind location of shear centre
2
How to describe the rotation of opposite ends of a body due to an applied moment
2
Maximum Shear stress in Beams
0
Normal and tangential stresses
2
Failure due to shear stress on rod lip?
3
Caulculating maximum shear stress at certain points
1
strength of eggshell
3
Percentage area of steel for a retaining wall - standard formula doesn't make sense to me?