Are there steam tables for subsaturated steam?

But what if I'm interested in values for water vapour/steam that is neither superheated nor saturated, that exists under the saturation curve in water phase diagrams?

Not sure this is universal but in my field of interest (steam turbines), we are interested in saturated steam because that is what we get in the last stages of the low pressure turbines. In our case, moisture is detrimental to the performance of the turbine, so it is important to be able to predict the moisture content aka liquid fraction aka (1-steam quality).

Saturated steam tables at thermodynamic equilibrium are one way to get this information.

Now, we could be (and are) interested in steam in a subcooled state, i.e. steam that remains dry at temperatures lower than the saturation temperature. This state is in fact often encountered in steam turbines, because the flow is expanded so fast that steam "doesn't have time" to condense at equilibrium. It remains dry, until the temperature/pressure conditions reach a threshold called the Wilson line. Then, condensation happens and thermodynamic equilibrium is restored. 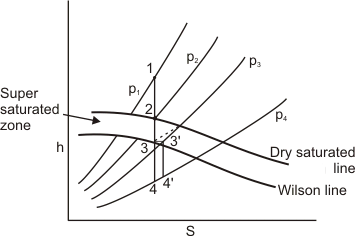 Whether you are interested in saturated steam at equilibrium, or subcooled steam, the reference data for the industry is the one from the International Association for the Properties of Water and Steam (http://www.iapws.org/relguide/IF97-Rev.html)

Because for any mix of water vapor we re-calculate using (1-x), x being the dryness fraction.

Saturated steam is important because it is the state before steam is heated above boiling. So: boiler exit conditions for saturated steam boilers, superheating boilers before superheating, condenser conditions, and some turbine conditions. Enthalpy of vaporization, hfg, is the heat required to fully vaporize water at the boiling point. It is what most heat is used for in making steam.