What are these reflective triangles on the sides of train track rails for?

Last night while waiting for the train at South Yarra station in Melbourne, I saw these reflective triangles stuck on the sides of the train track rails. They were evenly spaced a few metres apart for as far as I could see down both ways of the tracks. They could only be seen on the far pair of tracks, and the tracks on the other side of the platform also had these little triangles on the far pair of tracks. I'm assuming that there are also triangles on the near pair, but stuck on the other side of the rails where I couldn't see them.

There is a picture of the platforms and tracks on the Wikipedia article for South Yarra Station from 2014 which shows they weren't present then.

I can't work out what these reflective triangles might be used for. What is their purpose? 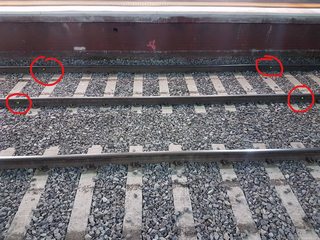 They are markers used for accurate position monitoring, without the need to close the tracks to trains and allow people to work close to them. All the markers can be scanned from a few fixed points (e.g. on the platforms) to create an accurate 3D picture of any movement of the track.

For example the sleepers or ballast may have been replaced recently, or there might have been other civil engineering work nearby which could have disturbed the tracks.

Similar markers are sometimes used as a reference points for train drivers (for example when shunting) with illumination from lights on the train, but that is less likely within a station where the platforms are presumably lit anyway when the station is in use at night.

Not the answer you're looking for? Browse other questions tagged rail transportation or ask your own question.

7
What is required to implement Positive Train Control on railroads in the US?
3
Train Signalling - What Do They Mean
6
For train track, why does the ballast need "good drainage"?
3
How can traffic signal controllers handle multiple conflicting preemption requests of equal priority without dropping one?
5
Why don't public transport networks have more routes to each terminal?
1
What determines the maximum possible slope of rail transportation (without rack)?
19
What are the engineering principles for a train to get electricity from the railway
35
What is the purpose of these “partially filled in” locomotive wheels?
1
Why do trains use the same wheels for staying on track and propulsion?