Around where I live there's these soapbox/gravity kart races (google "carros de rolamentos") in which the wheels are built simply from ball bearings. As I was building my own, I began wondering how I could easily mount my large bearings onto my kart, and it occurred to me that an easy way to do it would be to get some smaller bearings inside the ones previously mentioned and mount the resulting pair onto the frame, like this: 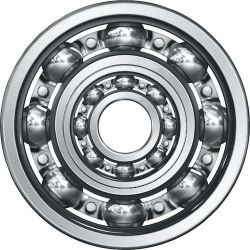 More importantly, I was under the impression that this would improve the performance of the kart in terms of speed. I am not completely sure though, hence why I am asking this question.

Model airplane motors run at 50000 RPM with ball bearings; I don't think that your limit is due to speed.

Basically, the assembly you picture will have the friction of, and be as rugged as, just using the inner bearing. The outer will just be going along for the ride (and adding weight and expense to your assembly).

You will increase the friction due to two sets of balls and lubricants with the races.

Also, this will cause more play in the system...

If it worked and gave an advantage then it would be used by the F1 teams...

Not the answer you're looking for? Browse other questions tagged mechanical-engineering applied-mechanics bearings or ask your own question.

4
How to secure a rotating disc so that it has no wobble
0
Quiet Turntable Bearing for 3D Zoetrope
0
How does the SRI “Abacus” rotary transmission work?
0
Bearings for a contra rotating tubes
1
Blind bearing bore design
0
Designing a joint with bearing, how much do I need to protrude for the bearing to stand? With pictures
2
How can I prevent twine from wrecking spindle bearings in a mower?
4
Radial vs thrust bearings for assembling a lift mechanism