Is there a 6th equilibrium equation for a static beam?

For a scholarship exam I'm taking, it takes simple enough ideas and then messes with them in crazy ways. In this question four of the equilibrium equations I'd use to solve this are linearly dependent. Is there a 6th equation I can use to get a definition answer? Is it something to do with the fact the forces are exerted by springs? 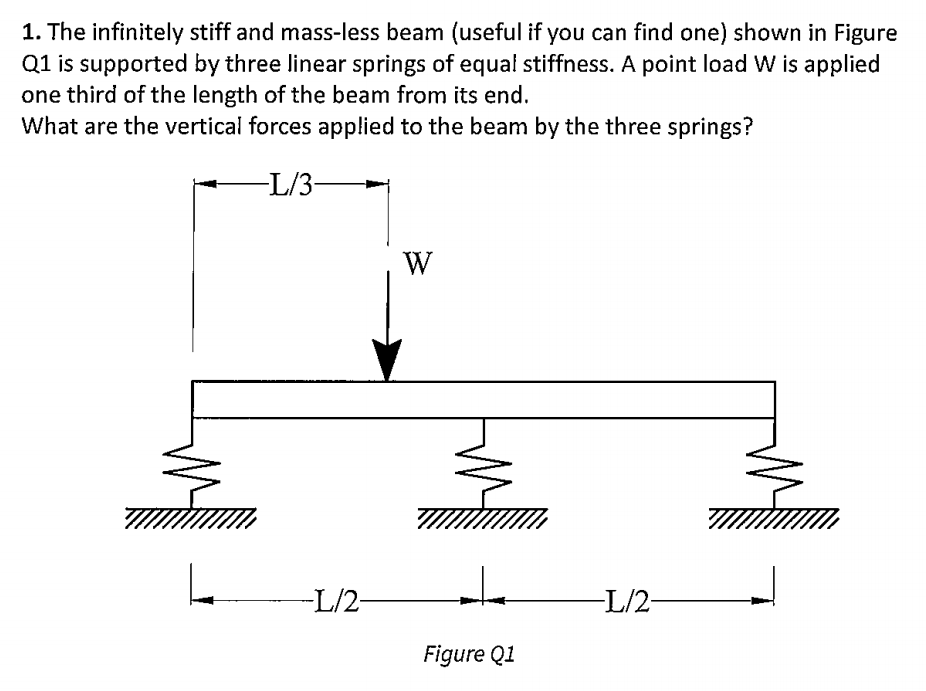 Since the beam is rigid, the displacement and therefore the force in the middle spring must be the average of the two ends.

It is a statically indeterminate structure so no application of static equilibrium equations will be sufficient to get the answer. But using the fact that the beam is infinitely stiff gives an ever quicker way: The beam will follow a perfectly straight line both before and after applying the load so the fundamental assumptions of Navier's formula for calculating the bending stress in a beam (plane cross section before bending remains plane after bending) are satisfied for the three springs as a beam cross section.

I consider the springs as three points with an area of 1 each. Therefore this a cross section with section forces $N=W$ and $M=\frac{WL}{6}$ and the cross section properties of area $A=3$ and section modulus $S=2\frac{L}{2}=L$.

So the spring forces in A, B and C resolve as:

However, it's also worth noting an important mistake you made in your work, and is the reason why you got that "four of the equilibrium equations [...] are linearly dependent".

The reason is simple: you can only have one sum-of-moments equation per structure. Using more such equations (as you have done) actually gives you no new information.

So, going back to the basics: for a 2D frame analysis, you only have three global equilibrium equations:

That's it. If you have a more complex structure with more than three unknowns (or often two, when there's no horizontal force component to consider, such as in this case), you'll need to either be clever or hard-working.

In this case, we got away with being clever. But if the supports weren't springs and/or the beam wasn't stiff, then we'd have to be hard-working and actually deal with the complicated math of hyperstatic structures. Don't worry, you'll learn about those soon enough.

And then you'll discover how to solve them with software and forget everything.

Not the answer you're looking for? Browse other questions tagged statics moments or ask your own question.