I have some homework question that i require some help understanding.

1) For the first question highlighted in red (referring to diagram viii), I know for sure that reactions at the supports is dependent on the length a because it determines the magnitude of moment it creates about the support and that it is not dependent on H because it is in the direction of the force(weight P) itself.

However, what I am uncertain about is the cable CE. Is this considered a two-force member in which tension at both ends will cancel each other out, hence varying the length L will not cause the reaction forces at A and B to change?

And also, is it true that for a two-force member that is in equilibirum, the net translational forces and rotational moment will be 0 throughout the entire segment? 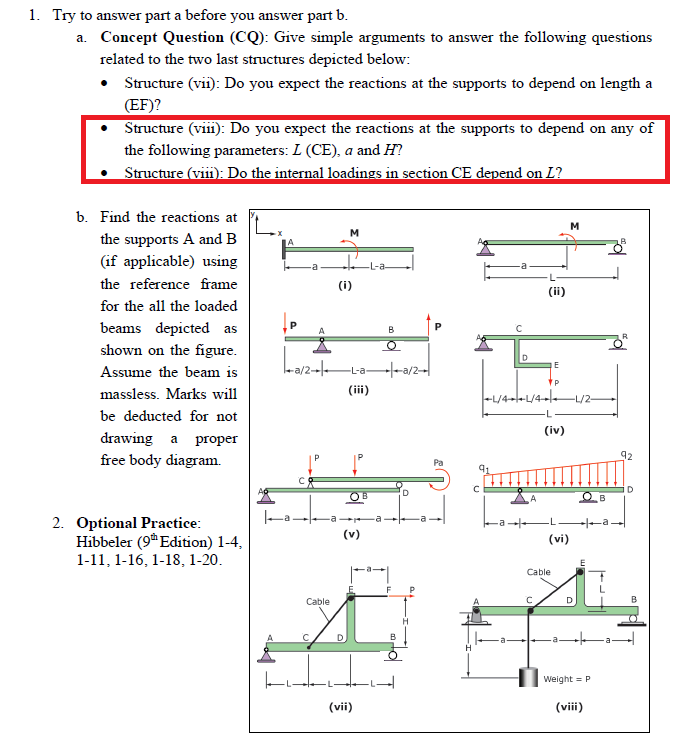 I don't want to take away the opportunity to work out the exact details for yourself, but I'll talk about the thought process I would use to approach these questions, and hopefully that will help clarify things.

Firstly, while I understand that the problem statement says to complete (a) before (b), I think at the point that you're getting stuck, it makes sense to sketch a few free body diagrams. It's part of the learning process, and as you do more and more of them you'll start developing a sort of intuition. My tendency is to run a couple quick 'thought experiments' either in my head or on paper, investigating two extremes. That's some of what I'll be doing below. Bear in mind that there are often multiple valid approaches to arrive at a solution - this is just one possibility.

1.1 Do external reactions depend on length 'a'?

Do we even need to know the quantitative beam length to determine the support reactions? No, we don't. We simply need to know the load is applied at midspan. That is, we need to know the ratio of the beam lengths to the left and right of the load. This is enough to tell us that half the applied load will go to each support. The same principle holds true for instances where the vertical load is offset from midspan. The length ratio (not the lengths themselves) is what determines the simply supported beam reactions. You'll see this when you complete part (b) of the assignment and go through the exercise of solving for the support reactions.

1.2 Do external reactions depend on the vertical position 'H' of the applied load?

You're on the right track with this one. Mathematically I guess it relates to how we can slide a force along its line of action. My first thought is usually the physical intuition that whether I'm holding, say, a can of paint on a 6" string or a 12" string, I've got to support the same vertical load from the can of paint.

1.3 Do external reactions depend on the height 'L' of the vertical member?

At first glance, this one seems like a harder question, but the important thing to remember is that with support reactions we're investigating external equilibrium. For this simply supported beam, we don't need to know what's happening inside the structure to find the external reactions. It's like how for a statically determinate truss, we can find the external reactions without investigating individual truss member forces or worrying about the specifics of truss geometry. So, for structure viii, we can solve for our support reactions using our equations of equilibrium without knowing 'L' at all. As with idea 1.1, this will probably become more apparent when you work through part (b) of the assignment.

Now we're getting into internal equilibrium, so you're correct that the cable geometry matters. If we assume that the cable is continuous and that at the point where the cable connects to the beam, the cable is passing around some sort of frictionless pin - then we can say that the tension, T, at every point in the cable must be the same (and equal to the applied load). Changing height L of the vertical member change the angle of the cable. As you noted, when we hold T constant and vary the cable angle, the x- and y- components of T vary. This means the internal forces in beam segment CD and vertical member DE are also changing.

For any member in static equilibrium (two-force or otherwise) the equations of statics will be satisfied at every point in the structure (including sections cut through a member). That is, $\Sigma F_x = 0$, $\Sigma F_y = 0$, and $\Sigma M = 0$. Satisfying these equations is one way we can determine internal forces (shear, axial, moment) at points along a member.

4
Accidental Torsion and Equivalent Static Load for an irregular structure
2
Does an external force at a joint between two members act on one member or on both?
1
How to handle modal combination in response spectrum analysis for member forces for member with more than 1 element?
2
On the proof of the Principle of Virtual Work
1
How would the axial force in a rod of a doubly-built in structure be determined?
1
Design a part to straighten moment and reduce torsion
0
Question in finding the direction of forces in a truss
2
Confused about internal hinges for calcualting reactions
3
How to simplify a truss bridge diagram?