How is the first image estimate generated in CT scan iterative reconstruction (IR)?

For decades CT scanners produced medical images from x-rays travelling through the tissues of the patient at different angles through analytical methods based on the Radon transform and Fourier slice theorem, and generally falling under the category of filtered backprojection (FBP), beautifully illustrated by Adam Kesner: 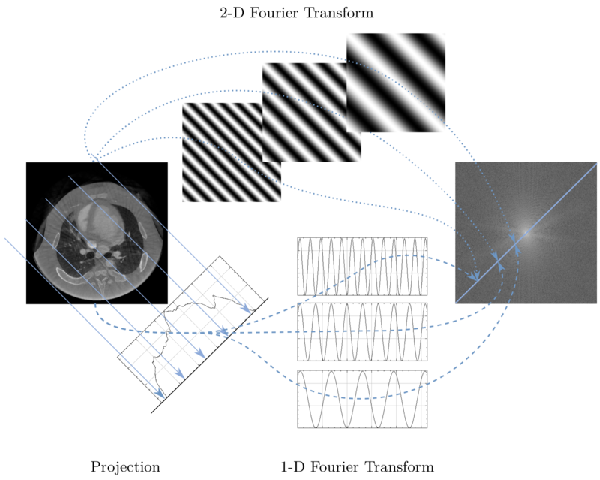 This is nicely explained here.

where $\mu$ is the linear attenuation coefficient, which depends on location $s$ and effective energy $\bar E,$ and hence, the log transformation is part of the generation of the 2D FT of the image. In iterative reconstruction the log transformation of the data comes about when calculating the maximum posterior estimate of the line integrals along different angles based on detected x-ray intensity, which is handled as log-likelihood problems. Sparse matrix issues may surface on the final image as artifact, which was basically addressed by increasing the dose delivered to the patient.

Iterative reconstruction came about as an attempt at applying computer-intensive optimization processes to handling problems such as the noise in the image, and with the ultimate goals of either improving the diagnostic image, or reducing dose. These IR techniques seem to be referred as either hybrid IR models (iDose (Philips) or ASiR (GE)) or model-based reconstruction (MBIR) (or "pure" IR). In both cases there is an objective or cost function and coefficients to be estimated, typically with a penalized regression model. This regression or optimization process is logically solved computationally (similar to gradient descent). The distinction between IR models is difficult to understand, but it seems as though initial IR products (ie Philips iDose would improve images based on a penalized regression model for weightings of noisier measurements based on photon distribution statistics. MBIR, on the other hand, would take into consideration the x-ray anode and receptor geometry and optics to produce a "forward projection on an assumed starting image."

In this great 2018 review paper on regularization techniques by Hao Zhang, the distinction between hybrid and model based seems to have been rendered obsolete in favor of SIR (Statistical Image Reconstruction) (please note that LDCT stands for low-dose CT scan): 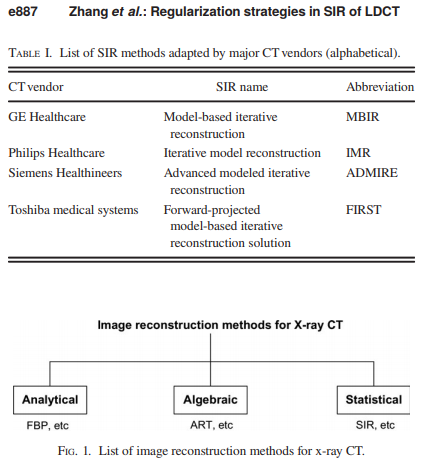 in contradistinction to FBP ("analytical") or ART ("algebraic").

In general model-based IR seems to take statistical IR to a different level, incorporating neural networks, as well as adding more refined assumptions such as the optics of the receptors, etc. Largely, though, these are proprietary algorithms, which are not available to the public or the medical community.

The question is in the end very basic, and makes reference to the terminology and general process used in the diagram found in this review paper: 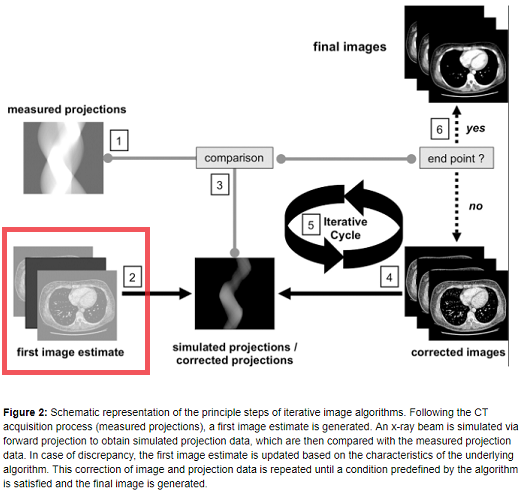 whether the $\color{red}{\text{"First image estimate"}}$ would (implied in the text) seem to be generated as an reconstruction process similar to FBP.

If this is remotely correct, my understanding of the picture above could be reworded as follows: 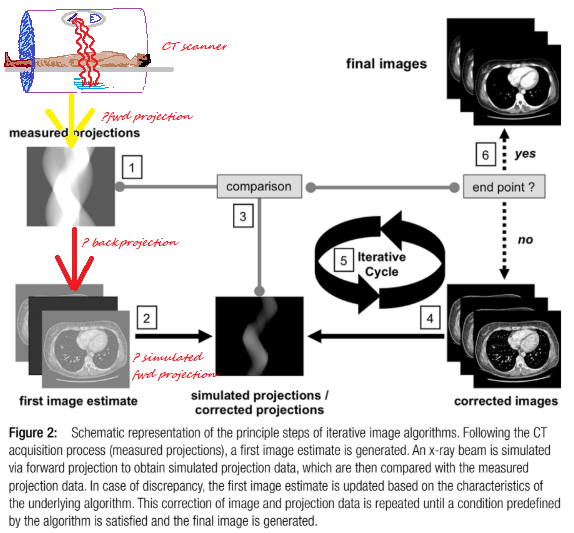 From everything above it would seem like hybrid IR algorithms would start off from a FBP of the raw data in the sinogram, while in the MBIR algorithms the first step would be simulated forward projection from a set of assumptions.

So the most complete formulation of the question would be whether the "first image estimate" in hybrid IR algorithms is formed via FBP; and how the "simulated forward projection" is obtained in MBIR algorithms.

It is difficult to tease out proprietary trade secrets from manufacturing companies; and it is further confusing to deal with misleading terms aimed at applications and clinical handling of these products. The main hurdle in understanding what's going on under the hood in these algorithms is the label "statistical algorithms" for hybrid systems. It turns out that although statistical methods are applied to hybrid models, they are mainly focused on eliminating noise, and addressing the problem of photon starvation (streak artifacts), which are particularly problematic in logarithmic data. These methods include better modelling of photon distribution, and penalized regression estimation of noise.

The initial step in these hybrid methods can be a FBP that moves the sinogram (or raw data) into the image space, followed by progressive optimization steps always within image space. However, an empty initial image is also possible, as explain in Iterative reconstruction methods in X-ray CT by Marcel Beister, Daniel Kolditz, Willi A. Kalender Physica Medica Volume 28, Issue 2, April 2012, Pages 94-108:

The iteration process can be initiated with an empty image estimate or using prior information, for example, a standard FBP reconstruction or a volume of a similar object. In general, the better the prior images match the final images, the faster the process converges towards a stable solution. The iterative process is finished when either a fixed number of iterations is reached, or the update for the current image estimate is considered small enough or when a predefined quality criterion in the image estimate is fulfilled. 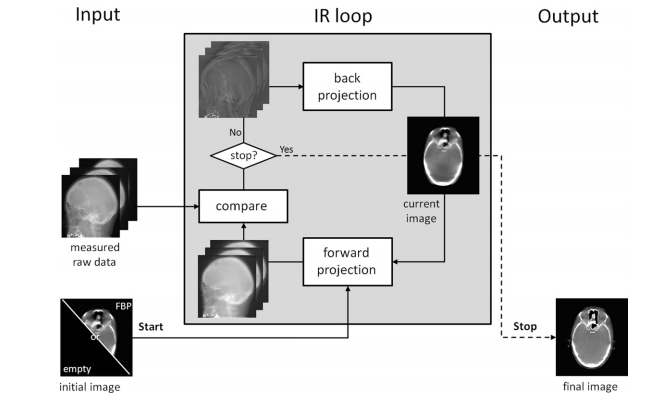 However, it is in model-based (latest generation) IR, aka MBIR, where statistics methods are utilized in full force, and both the signal and the noise are regressed through iterative approximations, incorporating a priori parametric information that takes into consideration such things as receptor geometry and optics.

As in the case of hybrid models, the initial step is still a FBP to generate an initial "guess;" however, the critical distinction is the generation of synthetic sinograms (forward projection) from the reconstructed backprojection. In MBIR, hence, there is a back-and-forth optimization process that oscillates between image and data space.

Modelling the physics in the iterative reconstruction for transmission computed tomography,J. Nuyts

Not the answer you're looking for? Browse other questions tagged biomedical-engineering medical-devices or ask your own question.

4
How is the long term reactivity of implant materials evaluated?
3
Why is the jacket or sheath of fibre optic endoscopes always black?
3
Could a medical ultrasound device be used for recording the topography of a small river?
4
How does a flexible endoscope turn?
1
Does anybody have information on how to refurbish an old laser rod (alexandrite or Nd Yag)? )
0
How to measure and verify ultrasound frequency and intensity from a cheap ultrasonic body contouring device?
0
How can the air pressures exiting from a blower be adjusted?