I have a rocket body with given Euler Angles, Quaternions and Angular-Velocities for given time steps. And I'd like to calculate the regular precession and nutation for every time step, so that I can plot the cange of Nutation-Angle over time.

Roll, pitch, yaw and Quaternions are given in inertial-frame, while Angular velocity is given in the Body-Frame.

For some reason I read that the nutaion-angle is simply the given pitch. But I am not sure if that is really the angle I am looking for because the values dont seem to fit my prediction. 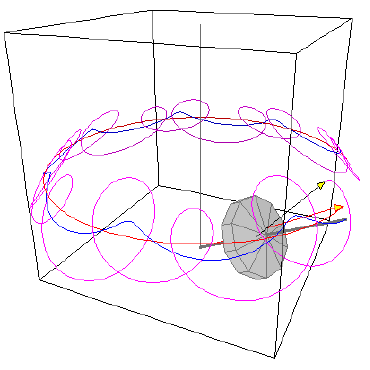 Thanks for all suggestions.

Nutation is described differently for different systems. Orbital Mechanics generally uses the full-blown and fairly general treatment where nutation is defined as the difference between the average precessional vector's instantaneous location and the actual body axis of the object (think of a frame attached to the average precessional vector and consider the motion of the object's body axis relative to this). This may or may not be convenient for your dataset because there is no assumption that the instantaneous body rotation vector is identical to the body axis. Indeed for free-nutation, it never is. But your title asks about externally forced nutation.

Your comment about pitch = nutation sounds like it comes from gyroscopes. That is a different frame of reference because gyro's are operating in a quasi-constant gravity field (the field, if it changes at all, changes so slowly that it doesn't matter as far as rate calculations are concerned). In orbital mechanics, the gravity vector changes rapidly compared to other rates of interest, for example, the processional period of the earth is about 26,000 years, so the gravity vector is changing 26,000 times faster than the rate of interest.

So what you want to do is figure out how to express the nutation of the body about the average precessional vector. At this point, we need to know the specific Euler angle system you are using. Is it a true Euler system, or is it a Tait-Bryan angle set? According to this document (p 473) - http://adsabs.harvard.edu/full/1992AREPS..20..469M, the conventional way to represent nutation is with two angles - $\Delta\epsilon$, the obliquity perturbation; and $\Delta\psi$, the longitude perturbation.

It's worth mentioning that precession rate, nutation, and axis wobble are all intertwined here. Including wobble complicates matters. This may not be a problem if only considering forced nutation. But keep in mind that the rotation vector and the body axis are different things.

Not the answer you're looking for? Browse other questions tagged aerospace-engineering aerodynamics or ask your own question.

1
Using a PID to control rotation
4
3D Transformation Between Two Cartesian Coordinate Systems Using Euler Angles
5
I have a problem with my representation of roll in Simulink
2
Closed loop guidance and control: how to tune a system with multiple feedback controllers?
0
Is it known how streamlined the Shinkansen 800 bullet train is when on rails?