How do trolleybus switches work?

The switches are so high it's not possible to see how they function on the ground. I really tried to look up information about this on the internet, but there's very little info available, and the info that is there is incomplete. I saw this diagram but still don't understand how the switch works. 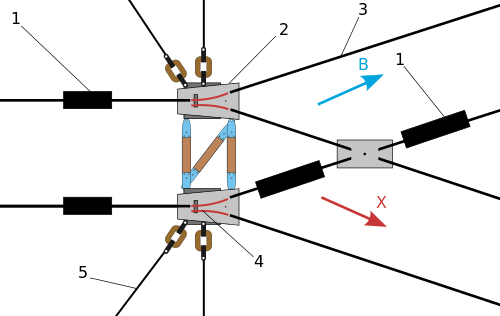 It seem simple to have a trolley pole follow the wire, it is simply U shaped and a spring pulls it up, so that force is applied against the wire. However I cannot possibly imagine how does the switches function, mechanically speaking. Also, how do they prevent a short-circuit at the switches' frog where both poles touches each other.

Also, back when tramways (UK: tram, US: streetcar or trolley) also had a trolley pole, did they have switches using the same mechanics as in a trolleybus switch?

Both methods described above are used. In the first method the boxes numbered #1 are insulating joints. Jumper wires above the overhead tracks provide power to the sections of overhead track isolated by the insulating joints. In the first method, when the bus trolley pole shoes are between the insulating joints and the switch frogs, the electric circuit goes: hot (plus) to the bus via the trolley poles back to the switch and into the switch frog solenoids and then to ground (minus) to throw the switch one way. If the operator is accelerating and/or turning on the heat, then increased current draw throws the switch. After going through the switch frogs the pole shoes hit levers that put the switch frog legs (movable rails) back the way they were originally. To go the other way the operator does not apply power or heat (or cuts power). The current draw is not enough to operate the solenoids so the frog rails stay in the original positions.

In the last method the first (leftmost) boxes in the diagram labeled #1 are special contacts and not insulating joints. If both trolley pole shoes hit the contacts at the same time (for an eventual or ultimate straight through movement here) then a separate circuit is completed to send power to the switch frog solenoids and throw the switch. Again, after the shoes go through the frogs they hit levers to return the frog rails back to the way they were originally. As stated earlier, if the bus has begun a turning movement, one shoe will be ahead of the other. For the contacts lined up in the diagram as shown, the pole shoes will not go through the contacts at the same time and the switch frogs do not get power and the switch remains set for the other branch (for an eventual turn in this diagram). Most installations of this kind I have seen have the contacts staggered so a turning maneuver activates the frogs and a straight through movement does not.

We don't have trolleybuses in Ireland where I live so I've never had a good look at the systems used. I'm sure that many ingenious solutions have been invented to manage the switching but here's one:

This seems to be similar to many tram systems in that the driver makes the route selection rather than an automatic switcher. The article goes on to explain some of the problems encountered (some almost comical) with the system in Eberswalde, Germany, and you may find some of the other pages of interest.

The above came from a conversation I had with a San Francisco Muni tech many years ago when I worked as a tech at AT&T. He was down the street from a pole I was working on.

The switches are activated by the current in the trolley wires itself. Next to the switch is a small sign saying "power" accompanied by an arrow. When the driver applies power with the accelerator, the switch switches in the direction of the arrow. To go in the opposite direction, the driver does not apply power, and allows the bus (or streetcar) to coast through the switch.

6
Do car power windows have limit switches?
2
Historically, how did tram switches work?
0
How exactly do noise canceling headphones work?
1
How does dynamic braking work with railway locomotives?