Design a part to straighten moment and reduce torsion

The question is: what options are there to keep the configuration (bolts, point of application of the force), but straighten the moment on the bolts?

Would having a shape like the left one made of a flexible material change anything? 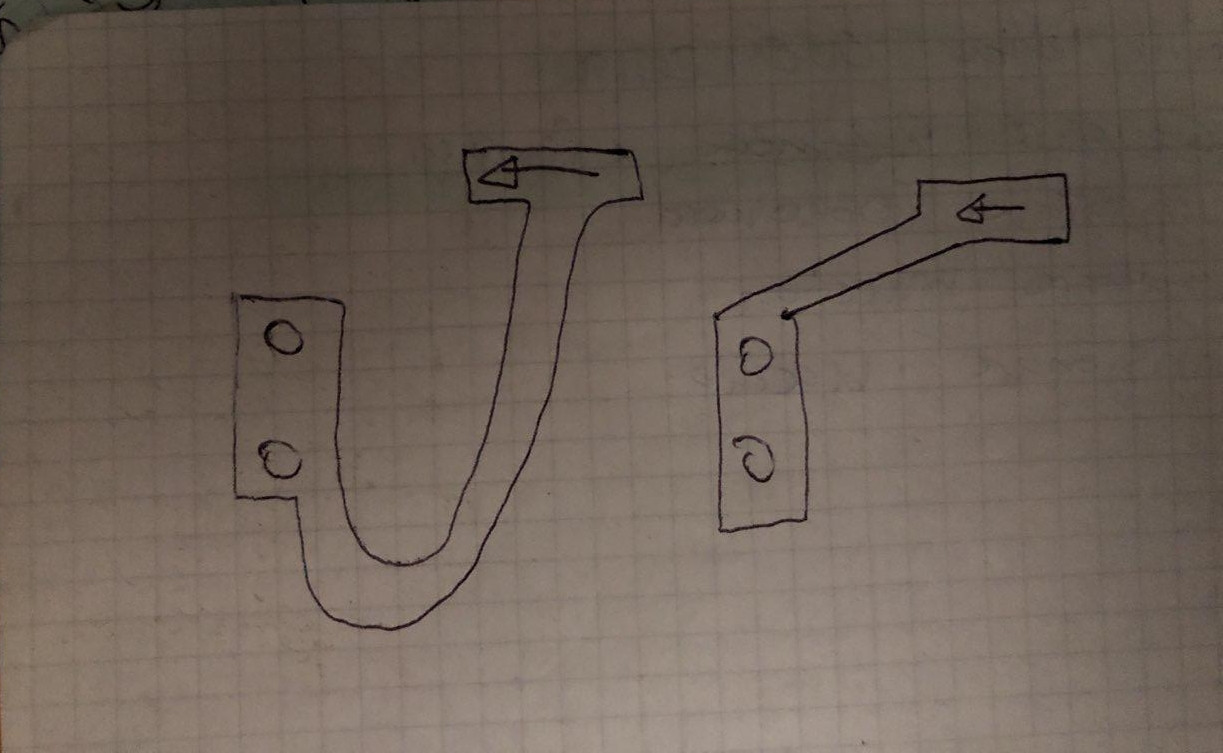 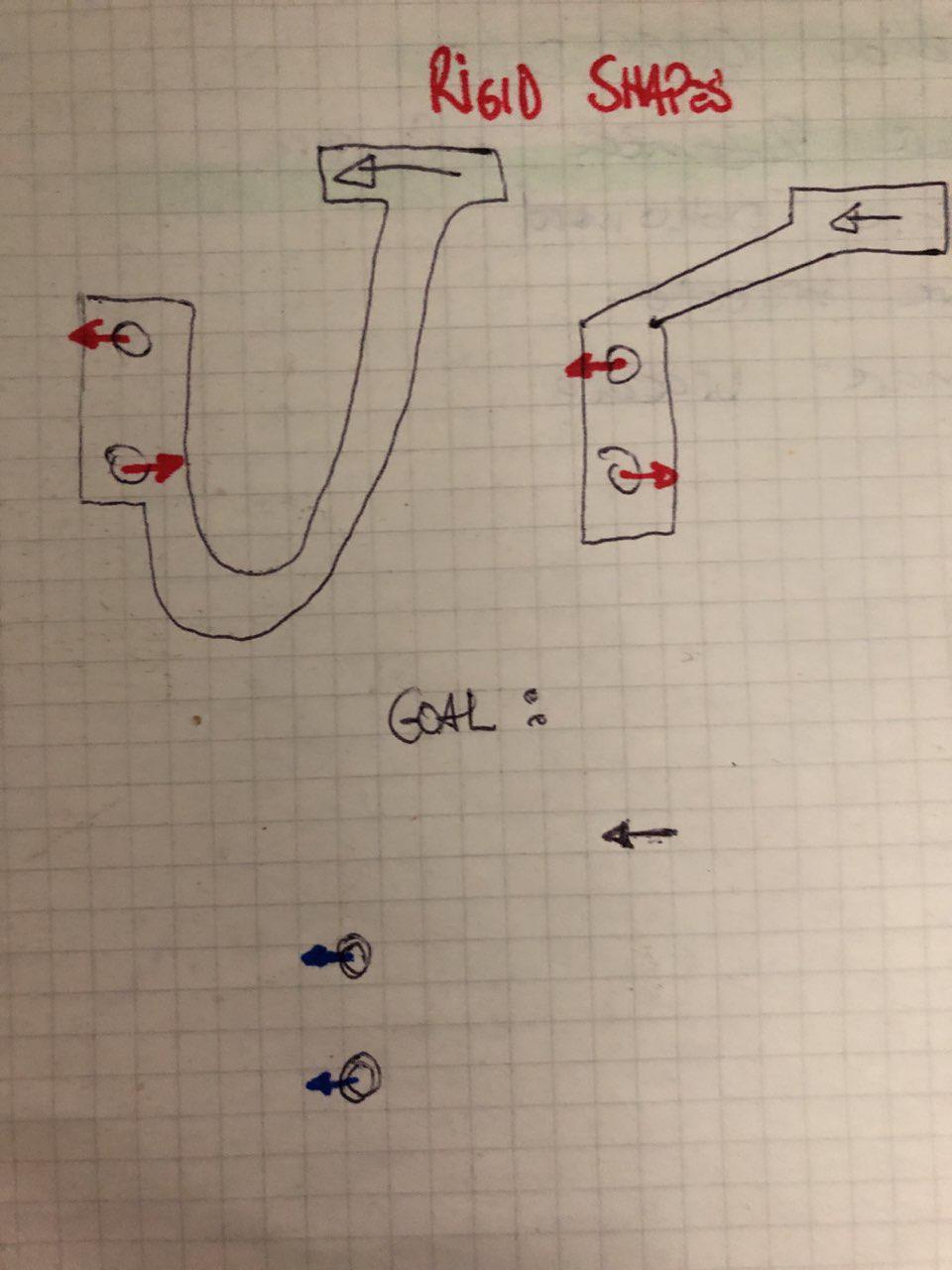 As you noticed, one thing that'd happen is that the piece would rotate counter-clockwise. We don't want that to happen, so we can already tell that the supports will need to resist that rotation.

But the piece would obviously also move to the left. So the supports will need to resist that motion as well.

In general, we want to satisfy three conditions for any 2D object:

That is, the sum of external forces (including reactions) in the horizontal direction must be zero, as must the sum of vertical forces and the sum of moments around any arbitrary point.

Now, let's start with the first equation. Subscripts 1 and 2 describe the two screws, and I start by assuming both reactions point to the right, and are therefore positive:

This is pretty obvious: the two reactions must cancel out the applied horizontal force. But how the screws divide that load is still unknown (maybe they split it 50-50, maybe the top screw absorbs it all by itself, maybe the bottom one has a reaction greater than the applied force and the top one then has to cancel out that excess reaction... we don't know yet).

Now for the second equation (now assuming both forces point up and are positive):

Notice that $R_{2,x}$ and $R_{2,y}$ have a distance of zero and therefore are discarded for this calculation. This makes sense, since a force on a point doesn't cause rotation around that point. Likewise, $R_{1,y}$ also has zero distance since we care about the perpendicular distance, and that force's "line of action" (it's projection) crosses through the other screw.

So we now know the direction of the force on the top screw: the opposite of what you drew, it will point to the right, countering the applied force.

As drawn, $L$ is obviously greater than $d$, which would make this force "negative", meaning our initial hypothesis that it was pointing to the right was incorrect: it actually points to the left, the same direction as $F$. This makes sense: the previous calculation told us the top screw's reaction was greater than the applied force, so the bottom screw now needs to compensate for that excess reaction.

And now to answer your actual question

Notice that the entire calculation above didn't take the structure's shape into consideration in any way. Whether the beam was a diagonal or a U-shape or an M.C. Escher painting was irrelevant. No matter the shape of your beam, or whether you add more beams, the reaction will always be the same.

You can even add more screws between the existing ones and the conclusion won't change: more screws will reduce the load on each screw, but you'll still have some screws reacting to the right and others to the left.

But notice the caveat in that previous paragraph: "You can even add more screws between the existing ones". That's a hint to our eventual solution. And that hint points us back to the equation for $R_{1,x}$:

As mentioned, the screws have reactions in different directions because $R_{1,x}$ is actually greater than $F$. So, how can we fix that?

Well, we just need to increase the spacing $d$ between the screws, such that it is greater than $L$. If that happens, then $R_{1,x} < F$, therefore

If $R_{2,x}$ is greater than zero, that means our initial hypothesis that it also points to the right was correct.

If you can have the bases extend up a little so that the center of the two holes is at level with the point of application of the force you won't have torsion.

Let's call the up screw A and down screw B and the line section between them $L$. And let's call the projection of the point of force on this line x.

Regardless of the lateral loads on the bolts/screws, you always have a pull-out force on the screws.

After OP's comment saying they can not change the handle geometry but they could possibly add some bolts to the right of the point of application of force:

Let's say we add two more bolt with the order of sizes you have in mind at the right-hand side such that together with the original bolts they make a square of 10cmx10cm.

Now let's calculate what is the maximum$ \ F_H $ which is not going to create a negative reaction ( reaction pointing to the left).

By what you said the torque of the force on the handle is F times(5cm height of the handle offset+ 5cm from side of the base square to it CG=10cm,

Horizontal bolt force without the effect of torque $V= F_H/4 $.

The critical bolts are the upper right-hand bolt and the lower left-hand bolts.

Not the answer you're looking for? Browse other questions tagged structural-engineering structural-analysis structures or ask your own question.

4
Accidental Torsion and Equivalent Static Load for an irregular structure
7
Can I reduce the column moment due to beam, by setting the beam end to pin?
0
Using strain energy to calculate deflection
0
Regarding design of fixation of a part
1
Buckling of Parallel rods
0
Slope of the Bending moment diagram where a point force acts
0
Rigidity and bending moment
1
Direction confusion for shear and moment when sectioning a beam