Do concealed door closers exacerbate wear on a door's hinges?

Not being of an engineering background, I was first inclined to think that a door closer would reduce horizontal load on all hinges and not contribute any support in the vertical dimension.

However, bearing rotational mechanics in mind, is this necessarily true?

I think, on any normal door:

If a concealed door closer (similar to the model in the lower image) is installed into the frame below the center of mass of the door, would it exacerbate load on the hinges rather than protect them? 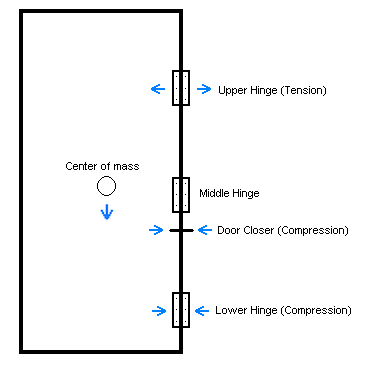 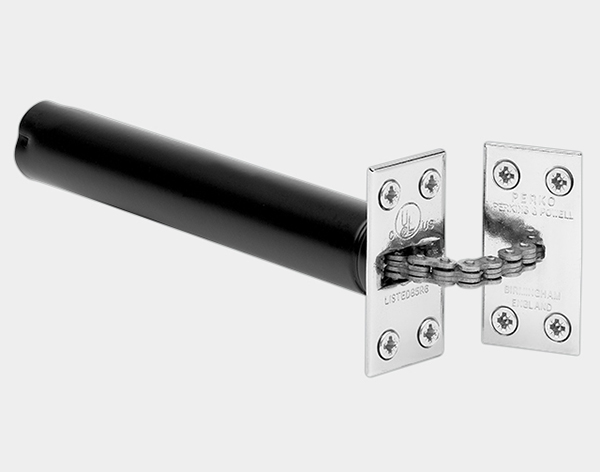 Would it contribute anything to the vertical load on the hinges?

The tension and compression on the hinges are door mass, times half of door width ,B divided by the distance of upper and lower hinges, D.

$$ m*(B/2)/D $$ And each hinge shares m/3 as shear with the middle hinge having no horizontal force.

Say concealed door closure is installed at x distance below the center hinge and applies a force F, so you have F*x = sum of the reaction of the three hinges. which is allocated most to lowers hinge and least to upper one.

Now you add or subtract this reaction to the original hinge load.

remember if you have too much out-of-plane force at the swing of the door you want to account for that too.

2
What's the purpose of these small closet-like-rooms-without-a-door?
12
How can large bridges be made resistant to earthquakes?
1
Applications with combination of high friction and low wear?
1
What kind of positioning holding Hinges do Laptops & Notebook Computers use?
7
How does the strength of a square tube depend on the side size?
2
Confused about internal hinges for calcualting reactions
17
Why are screw holes in most of the door hinges in zigzag orientation?