What should be the material and thickness of front pillars to stop car (~1,847kg and ~262 km/h) without killing the driver?

"Tesla Model 3 owner died in a tragic accident with a semi truck. The Model 3 went under the truck’s trailer resulting “in the roof being sheared off as it passed underneath,” which is known as a “side underride” accident." Is it possible to stop the car?

In high speed collisions essentially the human body fails under high g negative acceleration even if the structure of the car or cabin or test vehicle is strong enough to survive the collision.

strange things can happen that may not immediately be visible such as brain injury due to boiling of Cerebrospinal fluid because of the vacuum created by rapid deceleration of the skull during the crash when the race car helmet contacts the dashboard, (contracoup brain injury). This boiling will create craters in the brain. That is why there is helmet restraints to the back and sides of the seat.

In design of structure of the cars for crash survivability the general strategy is to protect the occupants by placing sacrifice high energy absorbing structure around the cabin. these sacrifice collapsible structures are commonly the wheel and suspension structure, ribbed and perforated framing bars and studs, engine and other substantial components. they will bend and deform while absorbing the crash energy and providing precious time (in milliseconds) and room for the occupants to break the impact.

Good restraints and padded potential contact surfaces, relocating objects which could be dangerous in a crash from the cabin, are other parts of the strategy.

An absolutely rigid structure is not part of the optimal strategy.

Here is some tables on human crash tolerance. 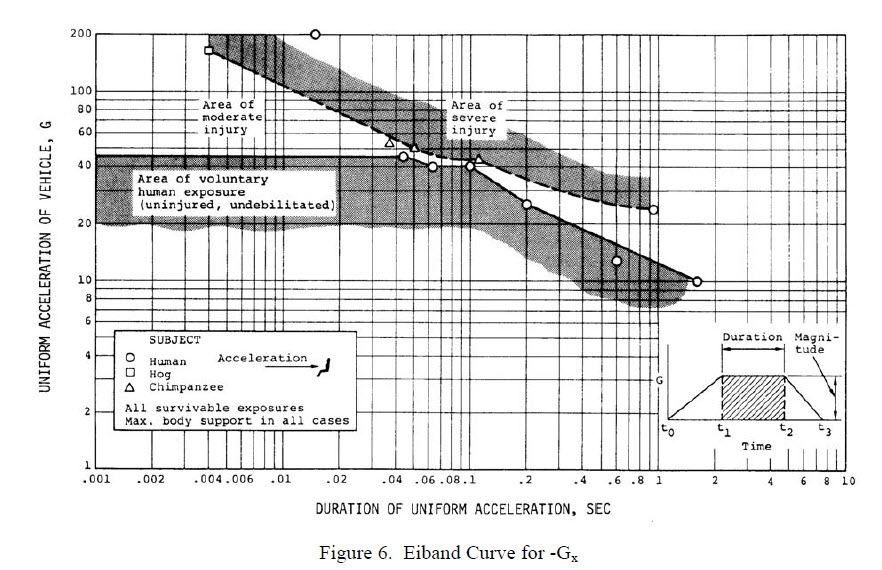 At 262 km/h (163 mph) there are many other aspects to that particular crash type than just front pillars. Even with pillars designed to stop the car many other factors could kill the driver. Maybe look at NASCAR stock cars for a better idea of high speed safety. Roll cages, Lexan instead of glass, helmets, seats/harness that severely restrict movement, etc. They are designed from the ground up for high speed impact.

Not the answer you're looking for? Browse other questions tagged mechanical-engineering structural-engineering materials aerospace-engineering car or ask your own question.

3
Stability issues in gateleg table design
6
Concrete formwork - best approach to counter uplift forces, for a freestanding pour?
16
What limits the speed of a car?
1
What is the strongest and lightest material?
1
Physics of Trailer Hitch Height
0
Securing aluminum angle to steel tubing without through-bolts
2
What should be the relation between flange length and web thickness for an optimum I - beam?