How much current is this phone drawing? 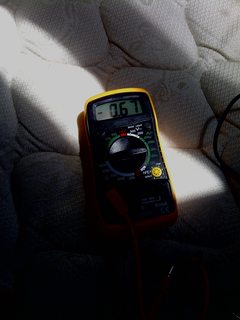 I know the current should be higher than 0.67 mA, because I know phones use current in the order of 1A. Also the charger is able to support up to 1A, it doesn't make sense that the charger would have such a superior current than the phone will draw.

I connected the multi-meter in series with the phone charger. That was done by stripping the red wire then cutting it, and then I held the 2 rods of the multi meter at both ends. The phone indicated that it was charging.

Since the phone indicated that it was charging and the battery was not full, I would take out the possibility that the phone disconnected the charger automatically. Also, I'm not sure about the idle state of the phone. The phone was turned on, and it has about a 3 inch screen. The battery is 1800 mAh. It still doesn't make sense that even in "idle" state it will draw such a small current while charging. Please let me know if I need to provide any more information about the measuring method, I didn't elaborate much on it because I thought it was simple, but I totally understand the possibility of a small mistake.

Here's another picture of the way of measurement, the reading is 0.45mA (from a different phone). 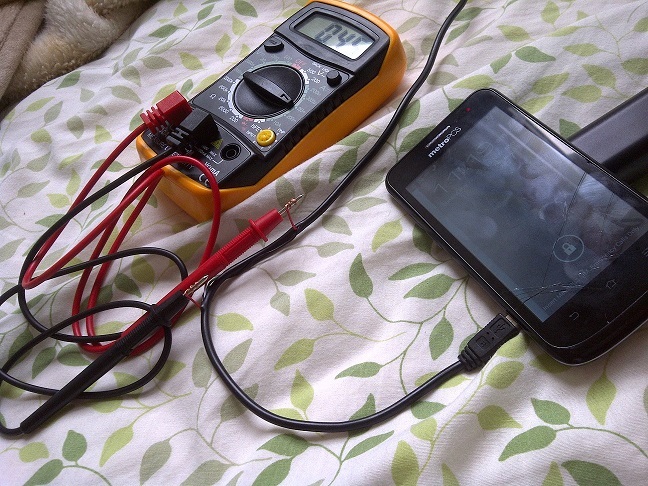 electrical-engineering measurements rf-electronics
Share
Improve this question
edited May 26, 2015 at 12:56

This answer is based on extra information provided by the OP in the form of a photo. The claimed currents were far too low due to a misunderstanding in how to read the meter's 10A range display.

A later suggested anonymous edit (August 2017) wrongly described what can be determined by measuring phone input current. Note that the OP includes battery charging current in his query re phone current draw.

The phone is drawing 670 mA

The meter is on the 10 Amp range.
This is because the 3 jacks at bottom are (probably) labelled some thing like
Common / 10 Amps / V Ohm mA
from left to right.
The Red lead is in the common socket and the black lead in the 10A socket.
This causes the meter to be on the 10A range even though the selector dial is set to 20 mA. Moving the dial may change the decimal point position but the input sockets are hard wired to the internal circuitry.

Note that the display reads "-".
This is either due to leads being swapped as above or possibly due to charger +ve entering meter on -ve lead.

The coloured ellipses on the photo highlight the points commented on above. 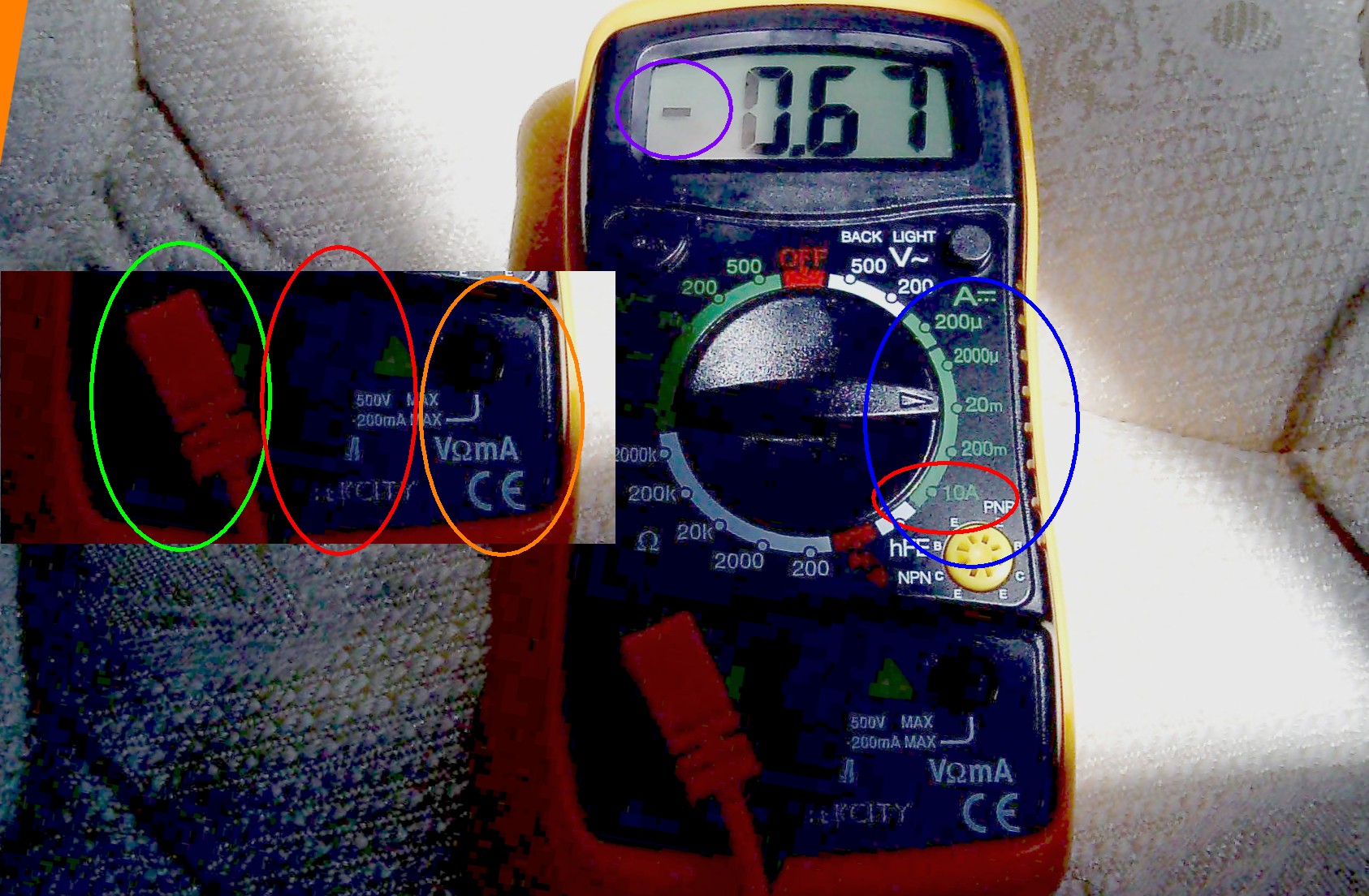 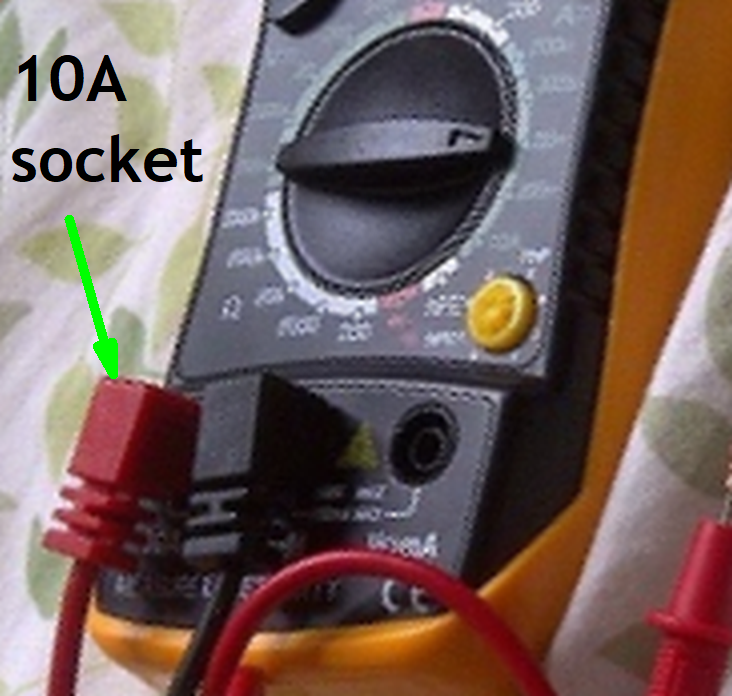 It may not be obvious, but, current INTO the phone and current presently being used by the phone can easily be different. See below.

To attain reasonable battery life the power (actually voltage) applied to a LiIon / LiPo (Lithium Ion / Lithium Polymer) battery MUST be removed once the battery is fully charged. Leaving the charge voltagfe applied to the battery will substantially reduce its lifetime. So, once charged, a phone will disconnect charger from battery. What happens then is up to the designer.

If the phone runs wholly from battery (maybe at a few mA) the battery voltage will fall. when it reaches a predefined level the charger will "kick back in" and recharge the battery. While the battery is discharging the phone will input whatever current the designed has cased the charger front end to draw in those circumstances. I'd probably aim at much lower than 0.67 mA but that's a believable figure.

Phone direct from charger makes great sense but does not seem to be what is happening in your case. Phone from some mix - 0 mA or more could happen.

Best case I have seen phones with standby times quoted in weeks, maybe 2 or 3 in some cases, although this would be unusual.

So it is unlikely that the phone always draws 0.67 mA
= over a month with even a 500 mAh battery)

However, even when in standby a phone will perform various functions periodically. These increase current drain. How much idle current a phone draws depends on peripherals activated, background tasks running and more.

So it is entirely possible that some of the time some phones draw that little current.

You need to tell us exactly how the charger is connected. A circuit diagram would be even better.

It seems like the Monsoon Power Monitor might be the right tool for the job of determining current draw. This would give you very accurate current readings in real time.

Not the answer you're looking for? Browse other questions tagged electrical-engineering measurements rf-electronics or ask your own question.

7
Switching batteries from series to parallel - technical solution
7
Charging a smartphone battery while using it
5
Did I wire these solar panels correctly?
1
Multi Ratio Current Transformers
4
Simultaneously charging and transmitting data to an android phone using usb
1
Measuring EM radiation power over surface area
1
Simple clarification about EV charging
1
Do piezoelectric materials produce a current flow or just an electric field?
0
Rotary Phones vs Pushbutton -- why did we ever have rotary?