Why not a reverse bending in the slab?

When I'm looking at images / videos about the load supported by reinforced concrete slabs, I always see a compression at the top of the slab in every point that varies from the center to the edges: 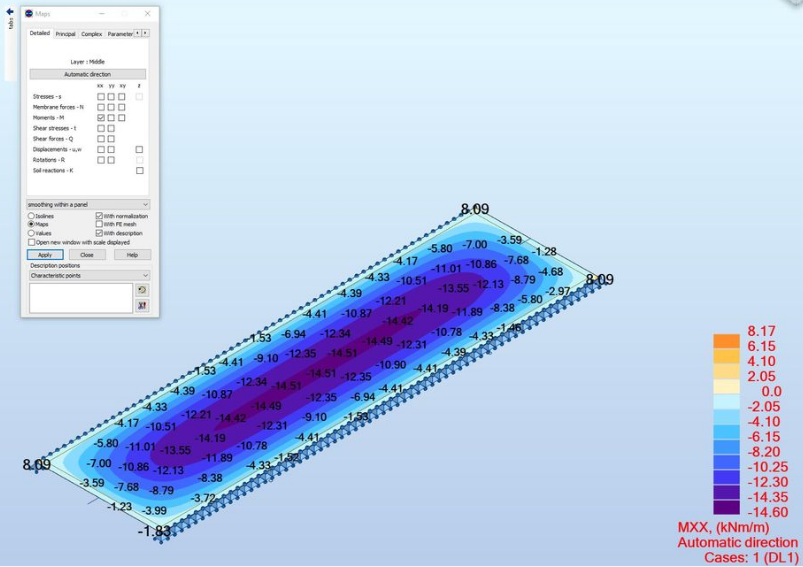 But isn't there a tension on the slab near the edges caused by the fact that the slab is supported by the walls?

I mean, why I always see the first and not the second schema below? 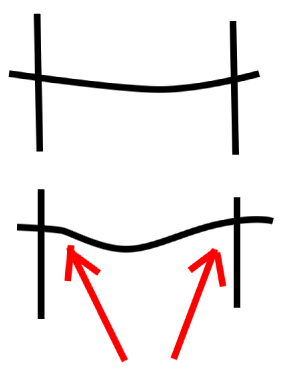 the usual assumption is that the slab is simply supported which means bending moments cannot be transferred from the slab to the walls. In the second sketch, the slab has clamped or cantilevered edges which do support bending moments.

Either there is some problem with global settings of your software or you must have defined the slab simply supported on the edges.

Not only there are moment over the supporting edge beams but codes ask for the loading pattern on adjacent bays in a way that causes most severe negative and positive moments.

From your image, we can clearly see supports on two edges of the slab. It seems reasonable to assume this is your entire model (that is, that you haven't created a view where the rest of the structure is "hidden").

In a real structure, however, the slab's behavior is affected by the stiffness of its supports.

Slabs are usually supported in one of two ways: either by walls or by beams (which are themselves supported by columns)1.

When slabs such as yours (which is only supported on two opposing edges) are supported by walls, the entire wall-slab-wall structure behaves like a column-beam-column frame. Just as the beam tries to deflect by rotating its supports (the tops of the columns) and the columns resist, generating negative bending moment on the beam, the walls resist the slab's rotation, generating the same negative moment.

Obviously, the columns/walls are flexible, so there is rotation at the beam/slab's edges. Just not as much as there would be if the connection were pinned.

When a slab is supported by a beam, however, is does basically behave as if it were a simple pinned support. That's because the slab rotating is felt by the beam as a rotation around it's own axis. That is, the beam feels torque (as well as bending moment from the vertical force transferred from the slab, of course). And beams are very flexible to torque, especially the types of beams commonly used in non-infrastructure construction. So the slab basically feels it can transfer its load to its support (the beam) and that it can rotate freely around that support: the very definition of a pinned support.2

That being said, there's a catch.

I've so far only discussed a single slab being supported by walls and/or beams.

But what if a wall/beam is supporting not just one slab, but two? That is, you have a slab to either side of the support.

Well, in that case, the other slab's stiffness must also be taken into consideration. Making matters worse, two side-by-side slabs will usually be designed under the same loading conditions. So if one slab under load is trying to rotate a wall/beam one way, the other slab will be trying to rotate it the other way, most likely canceling that rotation out entirely.

So if two slabs share a supporting wall or beam, they are usually treated as being fully fixed on that edge.

1 Slabs can also be directly supported by columns, but that's much less common and orders of magnitude harder to calculate.

2 There is a slight effect from the beam's vertical deflection at midspan, but it is negligible and usually ignored.

Not the answer you're looking for? Browse other questions tagged structural-engineering structural-analysis reinforced-concrete or ask your own question.

8
Vertical wave action on bridge
2
Center of Gravity of Precast Concrete Steps
2
Do beams in a structure transmit to piers?
6
Concrete formwork - best approach to counter uplift forces, for a freestanding pour?
3
Percentage area of steel for a retaining wall - standard formula doesn't make sense to me?
0
Impact of having flexible electrical hose buried into the reinforced concrete slab
1
Reinforced mesh at different distance in a concrete slab?
0
Maximum I-beam girder S12x31.8 span