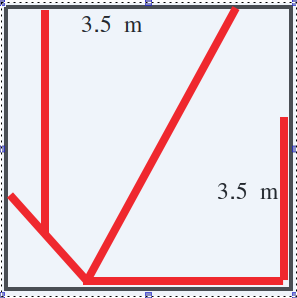 How does this affect the structure resistance of the reinforced concrete slab?

Based on your experience / simulations, could you provide an empirical percent regarding the new load capacity based on the initial load capacity?

I believe that the load on the slab looks similar to this (where the vertical should look similar to the horizontal, including the red spots): 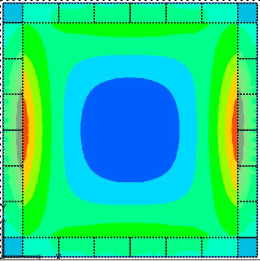 where red & yellow are for a top bending and blue is for a bottom bending.

at which a normal useful load is added.

You haven't specified any material parameters, so for calculation purposes, I am going to assume a reinforcement yield strength of 500MPa and a cylinder compression strength for both concrete and mortar of 25MPa. As I am basically just guessing these values, you will have to adjust the conclusion accordingly, if I haven't been so lucky as to guess correctly.

In bending failure, when the reinforcement yields and all concrete in tension cracks, the compression zone in concrete will have a height of approximately $\frac{\frac{\frac{\pi}{4}\left(4mm\right)^2}{100mm}\cdot500MPa}{0.8\cdot25MPa}=3mm$. (The factor of 0.8 is a correction factor for the shape of the stress-strain curve of concrete.) For a more correct value, this should be corrected for the safety factors, which will increase the compression zone a bit, but it will not matter much for the conclusion. Assuming we have a cover of at least, say, 10mm mortar on top of the hoses, there will be plenty of mortar above the hoses to transfer the compression, and the hoses themselves will not matter, as that part of the concrete would be fully cracked anyway and would not transfer any forces.

In shear failure, such a lightly reinforced slab will be even less sensitive to a few "missing" areas of concrete, as the hoses only weaken the slab locally. The actual calculation is rather more complex, but with a 4mm mesh the slab is unlikely to fail in shear before it fails in bending, so I am going to leave it as an "exercise for the reader".

So most likely, it will not have any significant effect on the structural capacity.

One potential issue is if the mortar, they used, is not equal strength to the regular concrete. This should not need to be a problems as mortars for these sort of usage scenarios are often made using ready-made mixes with a pretty high compression strength, but obviously I have no way of knowing if they chose the proper product here. And the mortar would obviously have to be appropriate for the environment in question.

While I agree with basically everything in @ingenørd's answer, I thought it best to add this answer, which is more optimistic overall, but also has some potentially really bad news.

Indeed, the areas which were cut out for the cables will have diminished capacity. I personally don't even think the strength of the mortar used to cover the hole is that relevant, since the lack of rebar to "bind" that mortar to the rest of the structure means the mortar almost certainly wouldn't act monolithically with the rest of the slab.

That being said, the reduced lever arm would likely reduce the beam's strength by around 70%1 (read that footnote: this is the definition of a lazy, back-of-the-envelope calculation). Pretty significant, but likely covered by the safety factor.

Since one should never go "oh, well, that's what the safety factor's for!", we can also remember the effect of load redistribution. These areas have a lower capacity, but they're also far less rigid (around 60% as rigid)2, so they'll need to resist a far lower load than the rest of the slab as well (though this equally means the rest of the slab will need to resist a larger-than-expected load, but that'd be distributed throughout the nearby slab).

Now, the areas that concern me the most by far are the cut-outs along the walls (the areas of the bottom and right edges with the cutouts).

Since this slab is supported by walls, there may be a non-trivial amount of negative bending moment near the supports. Since these cut-outs are transversal to the slab's direction of action (the slab near the bottom wall is mostly working in an up-down direction, this means the entire dimensioning cross-section of the slab has this reduced height.3

Making matters worse, 3 cm is pretty deep into a residential/office-building slab. If the cutout actually just cut right through the negative steel reinforcement, that could very well be catastrophic, since that'd mean the rebar was removed exactly where it's needed the most. And even if they didn't cut through the rebar, they almost certainly reduced its concrete cover, which could lead to long-term harm due to faster oxidation unless effective impermeabilization was performed.4

2 Again, just using the fact that moment of inertia is proportional to the cube of the height, so these areas would be $\dfrac{130^3}{160^3} = 54\%$ as stiff. Though the stiffness is likely affected by the fact we're dealing with a two-way slab. Though that fact also improves load redistribution, I believe.

3 Slabs are usually calculated on a "per-meter" basis. In the rest of the slab, this means that a "one meter slab" has a small 9 cm-wide cutout at the top, which doesn't sound too bad. In that bottom-right area, however, the entire "one meter slab" is shorter.

4 Though, honestly, if they didn't cut through the rebar, I'd take that as a very reassuring piece of news. 3 cm would be an absurdly high concrete cover for non-infrastructure projects. So not only would it mean they probably won't cause the building to collapse, but that the designing engineers took all this into consideration (whether by agreement with the electricians or just previous experience) and placed their negative rebar accordingly. In which case it's also reasonable to assume they calculated the entire slab appropriately, taking the reduced cross-section into consideration as well.

Not the answer you're looking for? Browse other questions tagged structural-engineering concrete reinforced-concrete or ask your own question.