Calculating the torque required by an Archimedes screw pump

Given an Archimedes screw pump (shown below) how would you go about calculating the torque required to operate it? I'm assuming a situation where you have to design for a given flow rate, Q (m^3/s) and the diameter, angle of incline and head are known. The fluid to be pumped is water.

I believe the power required to lift water in such a pump is just the hydraulic power, which we have all the variables for:

But I'm struggling to conceptualise how this translates into a value for torque.

Any help would be appreciated! 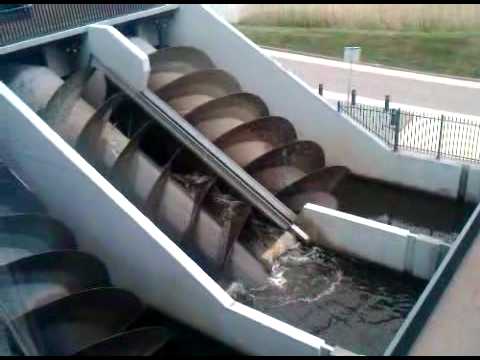 $P = 2 \pi T \omega$, where $T$ is torque and $\omega$ is the angular velocity in radians per second. Assuming that you know the flow and RPM, you can solve for torque.

I must add a caveat -- the above assumes no losses. Any friction, or water leaking backward in the assembly after it's been pumped part way up is going to reduce the efficiency, and thus increase the torque for a given flow.

(Edit, after the fact -- sorry for not thinking to include this before):

I know almost nothing about these pumps. I could come up with the above equation purely by using conservation of energy. If you're adding potential energy to something at a given rate, then conservation of energy says that if the process is 100% efficient then you need to be expending that same amount of energy, be it electrical, mechanical, or whatever.

So all I needed to do was to (A) know the power vs. torque and speed relation, and (B) assert 100% efficiency. You can use this sort of thing everywhere -- motors, pumps, switching power supplies (that's kind of a specific example, but I'm an EE), cars, trains, whatever. If you know the power out, and you can reasonably guess at the efficiency (or look it up in a book), then you know the power in.

Hydraulic power of a pump is $P_h=QgH\rho$, with flow $Q$, gravitational constant $g$, hydraulic height $H$ and fluid density $\rho$. Note that $H$ is a bit higher than the actual useful hydraulic height: 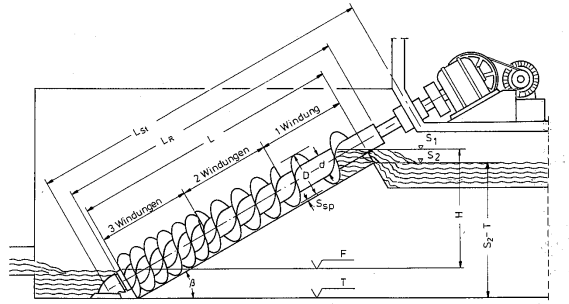 Shaft power (The power delivered at the shaft of the pump) is $P_s=P_h/\eta$, with hydraulic effiency $\eta$ - for screw pumps, this is usually around 75%. The strength of screw pumps is that this effiency is achieved over a wide range of flow rates.

Now you know the shaft power an can plug this into the formula provided by Tim: $T=\frac{P_s}{2\pi\omega}$.

Now you need to know $\omega$. RPM is $n=\frac{50}{\sqrt[3]{D^2}}$ with outer Diameter $D$ given in meters, then $n$ is given in rpm. This is the formula of Muysken, quoted after Nagel and Radlik. The actual rpm may be lower, at higher speeds the effiency suffers because more water flows back over the "shovels".

Wether your sizing a motor and gear or building the pump house, you should work closely with the manufacturer of the pump.

Not the answer you're looking for? Browse other questions tagged torque pumps power or ask your own question.

4
Output pressure of centrifugal pump
2
Calculating correct motor torque for windmill
1
How can I calculate the power to drive a water pump based on discharge from two hoses?
3
Would too small tubing reduce the max head of a pump?
0
Am I calculating the power required and power out for a peristaltic pump correctly?
3
How to resolve the interruptions in the screw pump operation due to air trap?
1
Required torque of climbing tracked vehicle
0
How is the ideal Euler line on a pump curve derived?
1
Calculating the load torque on a turbine pump