Consider a four-wheeled cart that has swiveling casters for the two front wheels, and has wheels that don't swivel in back. For example, a common shopping cart, or trolley if you prefer. If such a cart is pushed and let go, it will continue to roll in the same general direction, and so I'll call it stable.

On the other hand, if the same cart is turned around, pushed, and let go, then the cart won't continue in the same direction for long; it has a tendency to spin around, so I'll call it unstable.

Why is a cart with swiveling casters in front stable, but is unstable when the same cart is turned around?

Consider what happens in front wheel steering, such as an automobile:

This is a very stable arrangement:

Now consider what happens in rear wheel steering, such as a fork-lift (or when driving a car in reverse):

This is a very unstable arrangement:

Rear wheel steering is very handy at slow speed. A fork-lift for example can position the front end, push it into place, and adjust the back end to line up square. Similarly, it is easier to back a car into a parking spot than to drive in forward, and much easier to drive out forward.

The OP commented: "Shopping carts have no caster, but they do have trail. But I don't see how trail can be responsible, seeing as the same swiveling casters are stable if in front, but unstable if in the back. There must be another explanation.", and yes, there is another explanation. I mentioned negative feedback, but failed to expand on the idea.

Imagine what happens when a vehicle turns to the right. As a passenger, you feel yourself pulled to the left by a force (some physicists say a virtual force) known as centrifugal force.

This same force acts on the vehicle itself, though because it is a rigid object you don't notice it except perhaps for a slight tip to the left.

Now consider how the vehicle's wheels react to this force, looking at three different types of vehicles:

The rail car is symmetric front to back, asymmetric side to side, and steers by a very different mechanism using both front and rear wheels.

The front-steering vehicle's front wheels are affected by negative feedback, which forces the steering back to a neutral position.

The rear-steering vehicle's rear wheels are affected by positive feedback, which forces the steering into ever increasing turn positions.

Since they don't use rolling wheels, ships and planes steer from the rear because in that situation, rear steering is more stable. It's no longer done this way, but the traditional ship steering wheel used to be turned the opposite way to how it is turned in a car. (Notice in the description above how steering clockwise caused the rear wheels to turn counter-clockwise. Having the steering wheel turn the same way as the rudder made sense.) One would move the top of the steering wheel to the left in order to turn the ship to the right.

Planes on the other hand do still use this "backward" steering. When steering, the pilot pushes on the right rudder pedal in order to yaw to the right. This is the exact opposite of how anyone that has used a soap-box car with single axle front steering would expect it to work.

Bureaucrats and social idealists are often ignorant of the laws of physics, which tend to conflict with their world-view.

In the 1970s Joan Claybrook, as head of the US National Highway Transportation and Safety Administration, somehow discovered that motorcycles were more dangerous to their drivers than were cars. As a result, she commissioned, at great expense to the taxpayers, the design of a "safe" motorcycle.

Naturally it had a steel-pipe roll-cage to protect the driver.

And since her friend Ralph Nader had already killed the Chevrolet Corvair because he incorrectly believed that rear-engine vehicles were "unsafe at any speed", she had the motorcycle's engine mounted at the front.

This of course meant that the steering had to go at the back.

Anyone that has ever walked along, pushing a bicycle without holding the handlebars, knows that it's easy to go forward and impossible to go backward. The engineers and other professionals working on the project pointed out that her design wouldn't work, but she dismissed negative "opinions" of the naysayers, her ideals of highway safety taking precedence over reality.

Eventually it was given a pair of outrigger wheels (effectively the same as training wheels on a child's first bicycle), because no one was able to drive it without it almost immediately tipping over.

Here's an image of the prototype (the driver would sit facing the right): 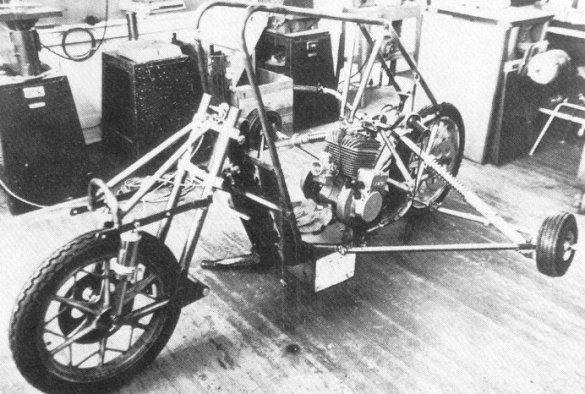 Your release doesn't need to be perfectly inline with motion with swivel casters on the front. The single direction casters in the rear make any left/right force upon release irrelevant because they are constrained. Flipped around with swivels on the rear and your release has to be perfectly inline for straight movement. Any left/right force upon release and it'll turn the casters.

In the extreme case, such as the caster wheel on a shopping cart, the system is undamped but stable, as the wheel oscillates around the 'correct' path.

The shopping cart wheels are not normally/ever casted, so the beginning of @ray-butterworth's effort is wasted in this case. He also mentions driving wheel a lot, which is unrelated to the question at hand.

Where I think he hits the nail is these two paragraphs (with regard that the cart's swiveling wheels have trail):

I wish he had made those two paragraphs the answer. But I also appreciate the deeper tour I got about how steering works with automobiles, fork lifts, trains, boats and airplanes.

Meta note: In the eyes of the Engineering SE tour, the shorter and precise answers - maybe with links to blogs or articles that provide the full story - would be preferred.

Not the answer you're looking for? Browse other questions tagged mechanical-engineering wheels stability or ask your own question.

7
How can I improve traction on a wheeled vehicle yet reduce friction?
20
Why do cars turn by turning the front wheel?
0
Positions of Max Load a human would exert on horizontal rods of such a system by positioning leverage & bodyweight?
1
Why are automotive brakes set inside the wheels, and not on the axles?
2
Dead mans brake on a hand-pushed wheelchair
1
Why are tri-axle trailers with single wheels more stable than double wheels?
1
Why is there a delta for locally stable in the sense of lyapunov?
5
Why caster angle causes wheels to self-center?
14
Why are multiple locomotives attached only to the front for larger trains?