Why is pure shear a "shear"?

If one looks up the meaning of shear strain, most sources talk about this situation: 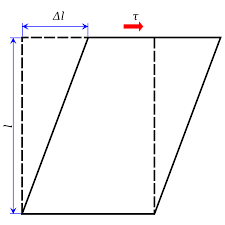 That is, a force acts along a surface of an element at it is elongated, turning a rectangle into a rhombus. Apparently this is called "simple shear".

But then I found out there is something called "pure shear", which is illustrated in this picture:

So pure shear, on the other hand, is a "flattening" of a body; the element is squeezed flatter on one axis and elongated on another. There is no change in angle between the lines, as there was in the simple shear case.

My question is: Why are these two things both called "shear strains"? What do they have in common, besides that neither change the area of the element? What is "pure" about "pure shear" and "simple" about "simple shear"?

In mechanics and geology, pure shear is a three-dimensional homogeneous flattening of a body. It is an example of irrotational strain in which body is elongated in one direction while being shortened perpendicularly. For soft materials, such as rubber, a strain state of pure shear is often used for characterizing hyperelastic and fracture mechanical behaviour. Pure shear is differentiated from simple shear in that pure shear involves no rigid body rotation. 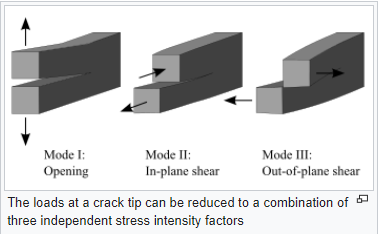 You can actually take a look here: Shear, pure and simple for a mathematical description.

Not the answer you're looking for? Browse other questions tagged structural-analysis stresses or ask your own question.

2
On the proof of the Principle of Virtual Work
2
Failure due to shear stress on rod lip?
2
Why is deviatoric stress the one causing distortions?
0
Consequences of Inextensibility of an in-plane line in Euler-Bernoulli Beam Theory
2
Why do we not want our stress state to be like this?
1
Maximum shear in a beam
0
Direction of Shear Stress on the periphery of a circular section beam
0
Equality of Normal Stresses on opposite faces of the element
3
Why in a rectangular cross section beam the shear stresses are parallel to the height throughout the surface?