Identifying Compression and Tension as well as Hogging

Im looking for clarification on how the solution identified the moment to be hogging, as well as the axial stress to be in compression?

Please reference the photo below with the red box's 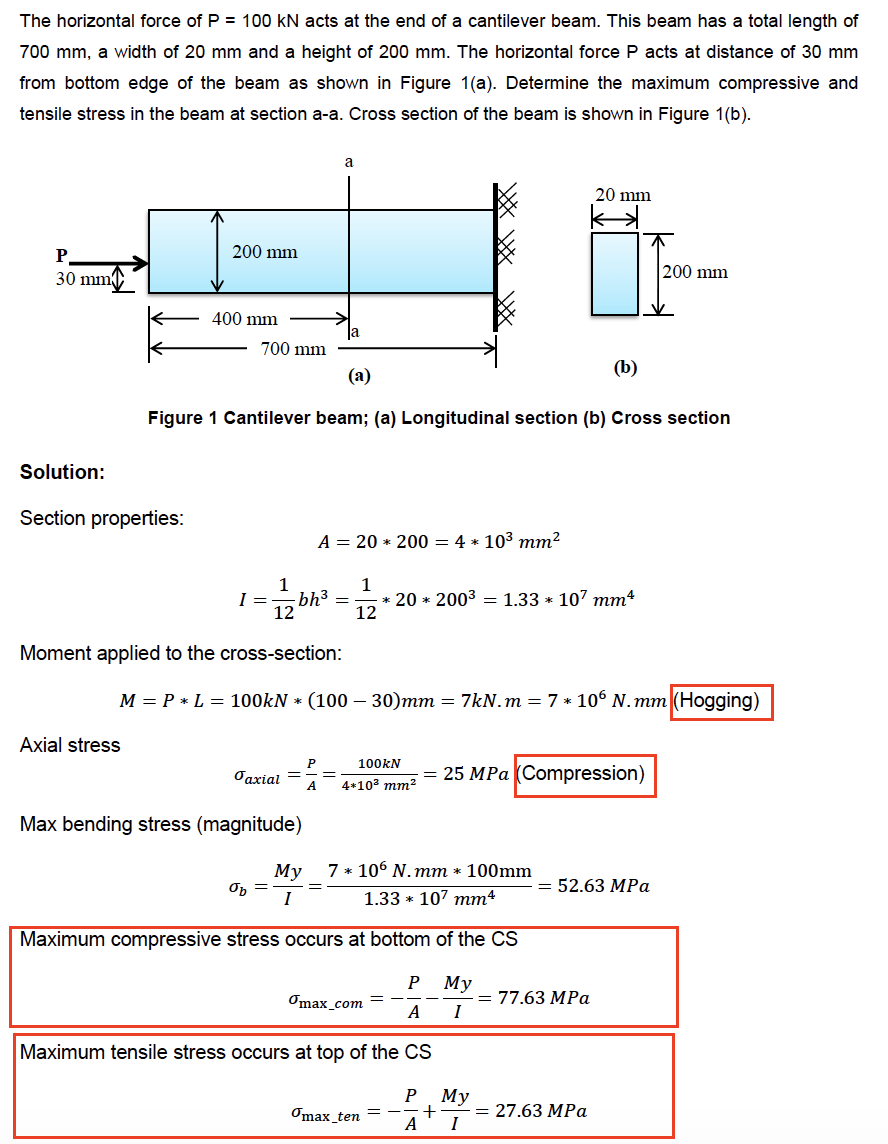 Once again, the superposition principle is our friend. It basically means we can look at each load in isolation, find the individual results, and then add them all together to get the final result.

In this case, we are actually dealing with two loads:

Now let's look at these loads in isolation:

This one is pretty obvious. The force alone (remember, we're not yet considering the bending moment effect, so you can think of the force as acting at the neutral axis) obviously causes uniform compression throughout the beam. This means the beam remains perfectly straight, just a bit shorter. Not much to discuss here, I believe.

The bending moment is counter-clockwise in this case. This seems pretty intuitive to me, so I won't spend any time demonstrating this.

The issue is how the beam deflects given this bending moment.

Looking at the free end, it can rotate in one of two ways: clockwise or counter-clockwise. It once again seems pretty intuitive to me that the beam will rotate counter-clockwise, but here's a demonstration, just in case it isn't to you:

Let's transform the bending moment into a force couple: two opposing forces which cancel each other out other than generating a bending moment. A classic example is a crank valve.

So, if you had a crank valve at the end of a beam, and you applied the forces shown above, how would you expect it to rotate? It seems clear the beam would rotate counter-clockwise. By this I mean that the free end (and indeed any other slice along the beam) would rotate counter-clockwise, such that the top fiber moves a bit to the left and the bottom fiber moves to the right.

And that tells us all we need to know: if the top fiber moves to the left, then the total length of that fiber has increased (from 700 mm to... 701 mm or whatever). And we know that if an element is lengthened, it must be under tension1. Likewise, if the bottom fiber moved to the right, that fiber's length shortened and it is therefore under compression.

The bottom fiber is under compression due to both loads, so that's simple enough.

As for why the moment is considered hogging, well, that's just the technical definition of hogging moment.

When the beam bends in such a way that it forms concavity downwards (cup-shaped) it is called as sagging. Whereas the bending which results in convexity upwards (like a hump); is known as hogging. [source] 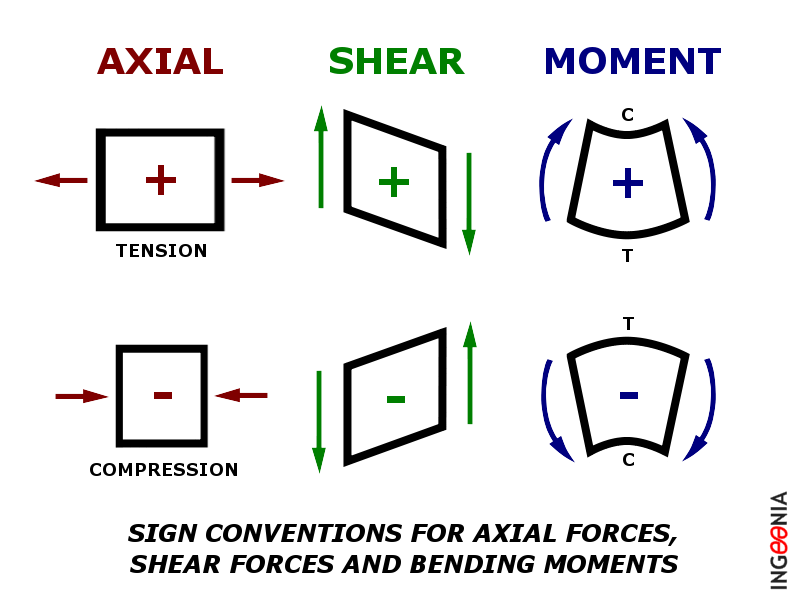 You can see that counter-clockwise moments on the left side of the beam are negative, and therefore hogging.

1 Or possibly under a positive thermal load, if you want to be a pedant.

As a rule of thumb you always get compression on the part of the beam's section which is under axial load.

6
How to interpret this BS 5950:2000 clause for splices in compression members?
3
Multi-stage/multi-section reinforced concrete slab design
11
What is the difference between the Polar Moment of Inertia, $ I_P $ and the torsional constant, $ J_T $ of a cross section?
2
Center of Gravity of Precast Concrete Steps
1
Determining the first moment of area (Q) when calculating the shear flow of a built up member
0
Selection of Aluminum (or steel) tubing dimension based on uniform load on supported beam
1
Locations of max stresses in a circular beam?
0
Max compression & Tension