For an engineering project in school, we are checking the stability in the longitudinal direction of an apartment building, taking into account the dynamic effect of earthquakes. For this, we are making a two-dimensional finite element model in Matlab. We have to assume that:

The stability of the building is guaranteed:

The picture attached shows an apartment building with properties:

Plane strain and plane stress can be modeled by means of beam elements, provided that in the elements with plane strain condition adjusted values E' and ν' for the Young’s modulus and the coefficient of Poisson are provided:

We are struggling with the implementation of the plane stress and plane strain conditions. We have tried to model this as follows:

This implementation gives not the results we are hoping for. Are there any suggestions for improvement? 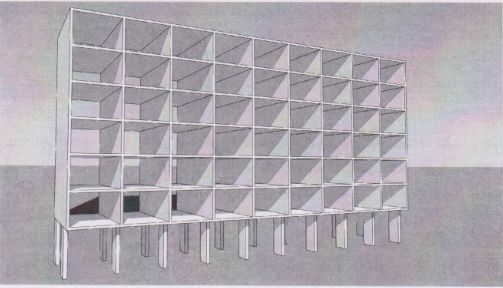 Depending on the type of elements (solid,shell,beam etc.) you can derive the element stiffness matrix from the shape functions given in many finite element texts or other online forums

This allows you to build a Finite Element model that incorporates both plane strain and plane stress conditions for individual elements without changing the material properties or performing the stiffness scaling that was discussed.

6
How should one model a structural model with both line elements and area elements?
3
Multi-stage/multi-section reinforced concrete slab design
6
How to derive Equivalent Static Load for irregular structure modeled with FEM?
3
Beams in Bending: Bending stress / strain distrution
1
Why is the normal stress assumed to be 0 in plane stress?
3
Determining σxx on a 3d system with resolved forces (stress, strain, shear strain energy)
0
Dynamics work and energy problem
0
What happens when we remove the load, in different regions of the stress strain diagram of mild steel?