Pin support, why is there no horizontal reaction force?

I am trying to understand this problem: 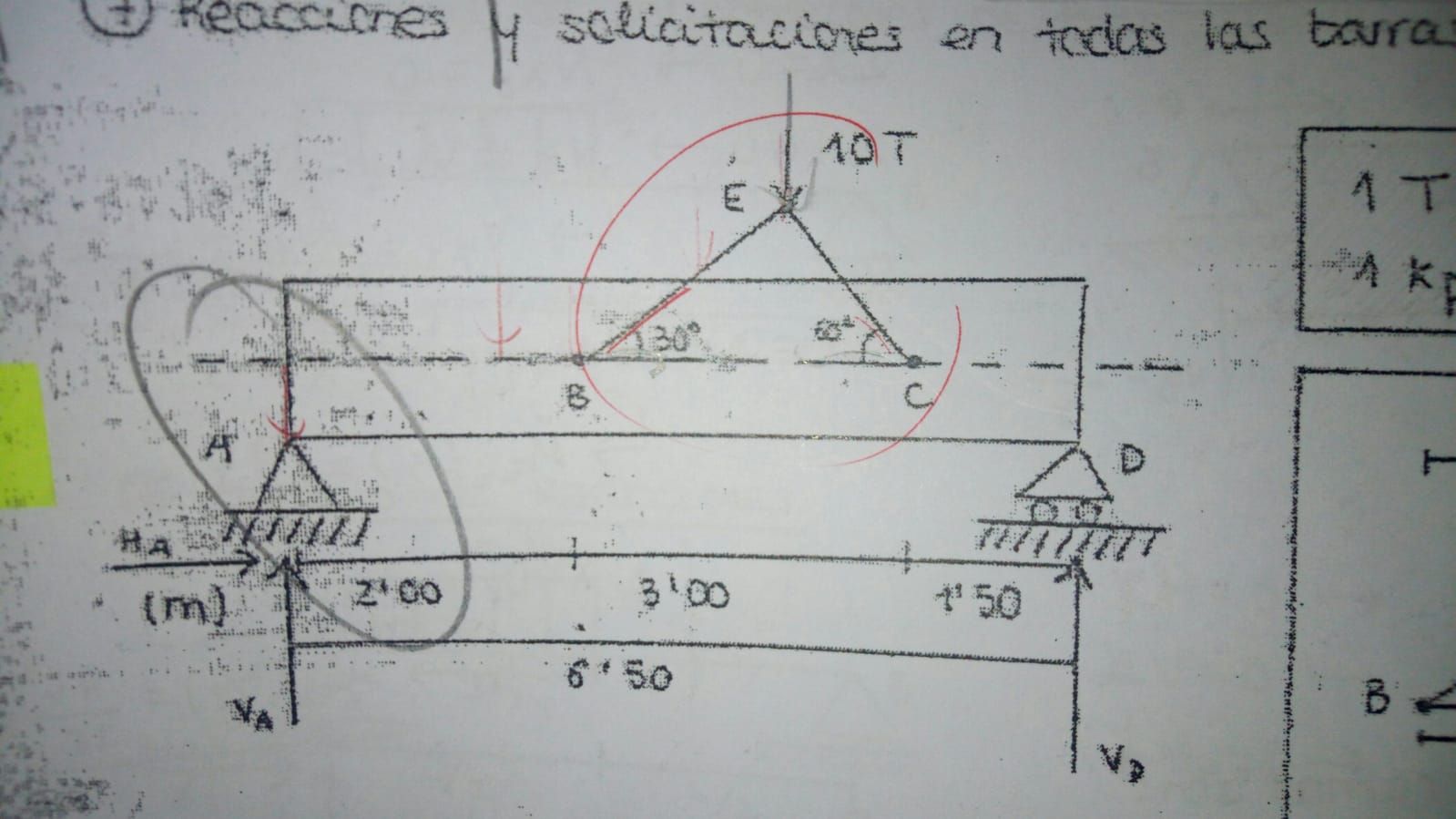 If we break down the 10T, they behave like this: 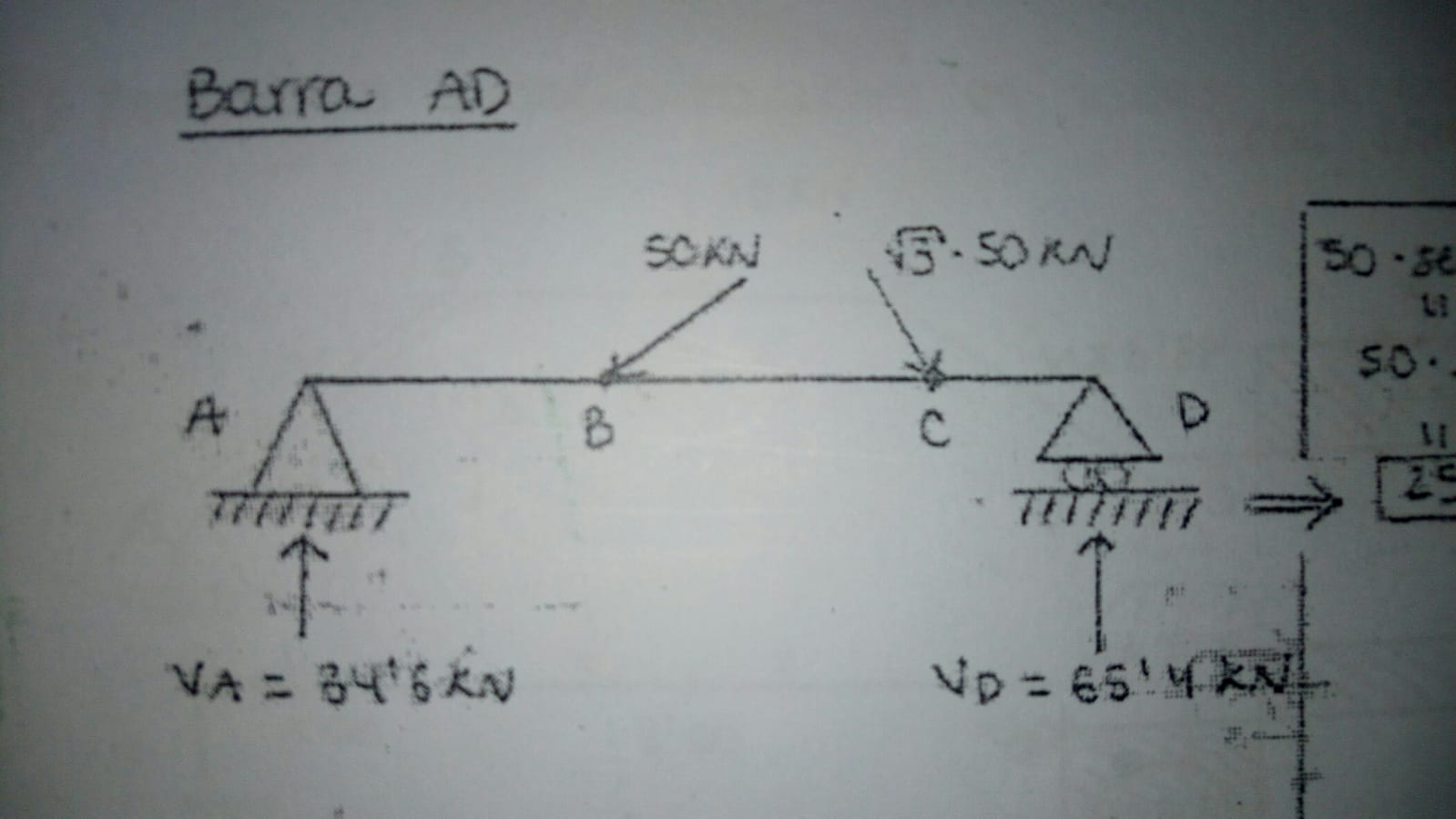 The right end of the beam can move as much as it wants, but the left end is pinned.

Why is there no horizontal reaction at A, if there is a horizontal part of the forces being applied on the beam axis?

I imagine, the force will push one section, and each section will push the next one, until the end, where it will create a reaction, just like the vertical forces are doing?

Thank you a lot.

Assuming I'm understanding the problem statement correctly and we have a vertical load transferred to a beam via a sort of angled frame, then here's how I'd think about the beam reactions.

The longer way round is perhaps to convince ourselves that the frame applies equal and opposite horizontal loads to the beam and that this, again, means the horizontal support reaction must be zero.

First, imagine we have a simply supported beam with equal and opposite horizontal load applied at a point.

There is no net load at the point, so it's reasonably easy to convince ourselves that there's no support reaction.

What if we applied equal and opposite loads at separate points along the beam?

Now, it's perhaps less clear that there's no support reaction. But we can convince ourselves easily using the equations of statics. The beam reactions are about global stability of the structure. As is always the case in statics, the sum of horizontal forces must be zero.

So, by some quick math, we prove that the horizontal reaction at Point A must be zero. In fact, for this beam configuration, the only segment of the beam "feeling" axial load is the segment in between the applied loads. It can be tempted to picture the left load "pushing" on the beam segment to the left of it, but that's not what's happening. Imagine a game of tug-of-war where the two innermost opponents perfectly oppose each other's forces...the players farther down the rope wouldn't feel anything, right?

So now, all we have to do is convince ourselves the horizontal components of the applied loads are equal and opposite.

Ta, da! Sometimes our initial intuition can lead us a little astray but the equations of statics never lie. Forces and moments must always sum to zero in order for the structure to remain...static.

Think about the three members that form the triangle EBC.

There is no horizontal load applied at E.

You know there is no horizontal load applied at C by beam CD, because there is a roller bearing at D.

Therefore by equilibrium, there is no horizontal load applied at B.

You are more than overthinking this. Keep it simple. For an object at rest: 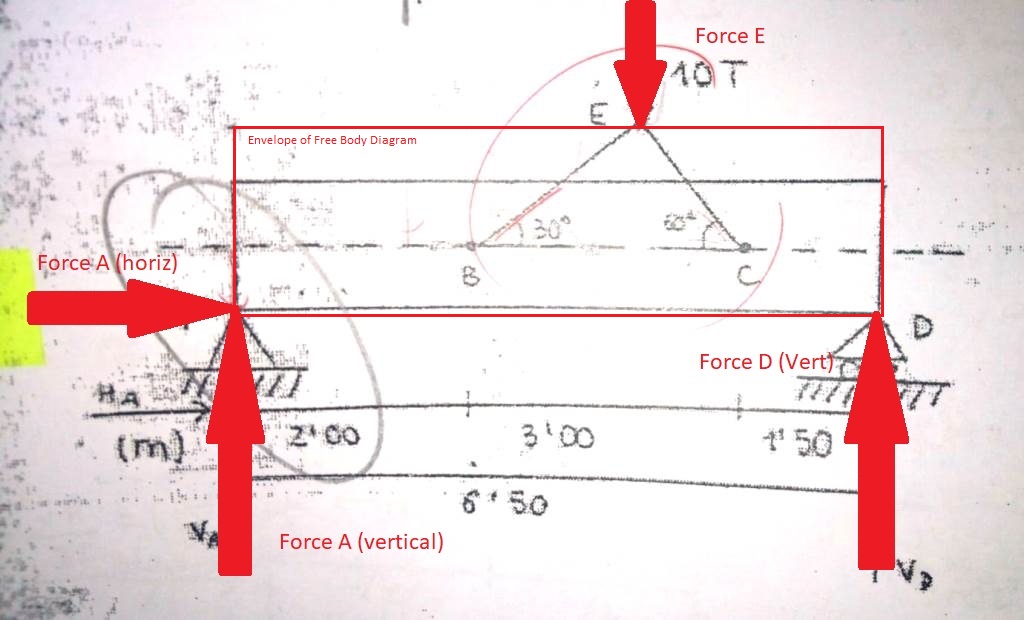 Again, ΣF(x) = 0. With the diagram drawn this way, what do you thing Force A (in the x direction) is?

8
Why build a cell lattice tower with square cross-section instead of triangular cross-section?
5
Logic behind location of shear centre
2
Best angle and length for a diagonal wood support for a pull-up bar
1
How to transfer reaction forces of beam to a weld?
1
Critical Buckling Load for a Spring Supported Bar
4
How to calculate indeterminacy of pin-jointed frame?
1
How to find the reaction forces, moments and the displacement of the fixed beam with a link?